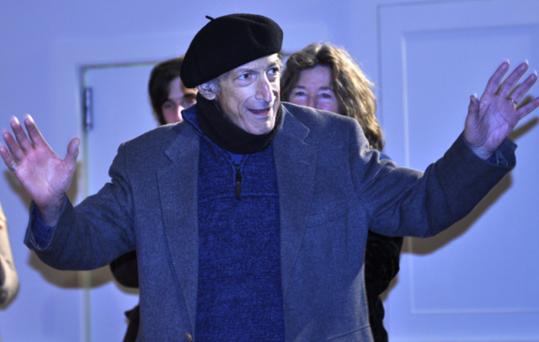 Jon Lipsky at an event held in his honor in January at the Martha’s Vineyard Hebrew Center. (Photo By Sally Cohn)
By Bryan Marquard Globe Staff / March 21, 2011

Possessing enough talent to fill all those roles and more, Mr. Lipsky was a playwright and director who also taught acting and writing at Boston University. He adapted books into plays that dazzled theatergoers and conjured short dramas from weighty ideas to entertain and educate children at the Museum of Science in Boston.

Creativity wasn’t limited to his own endeavors, though. Sometimes it seemed as if Mr. Lipsky let everyone he encountered sip from the same cup of inspiration that helped him fill every niche in Boston’s theater scene.

“He gave you strength, optimism, a kind of theatrical spirituality,’’ said Leslie Epstein, the director of BU’s creative writing program and the author of the novel “King of the Jews,’’ which he adapted into a play Mr. Lipsky directed. “He gave you a feeling there was more in your work than you even knew, and he was going to find it. Jon brought out the best, things you didn’t even know you had. He really was a crucial spirit in the artistic life of Boston and is irreplaceable.’’

Mr. Lipsky, who taught at Boston University for 28 years and was associate artistic director of the Vineyard Playhouse on Martha’s Vineyard, died Saturday in his West Tisbury home of carcinoid, a rare cancer. He was 66.

His work won awards in Boston and elsewhere, including a 2007 Elliot Norton Award for directing the play “Coming Up for Air,’’ which he created with jazz musician Stan Strickland, and for directing “King of the Jews.’’

His former students, meanwhile, act on stage, in films, and have followed him into the roles of writing and directing.

“In my senior year at BU, you came up to me in the hallway and told me that I was a writer,’’ Daria Polatin wrote in a letter to Mr. Lipsky when she heard he was very ill.

“Nobody had ever told me that before, and those words struck a deep chord within my soul,’’ wrote Polatin, who lives in Los Angeles and writes for theater and television. “You then invited me to take part in your playwriting class. It was the most influential class I’ve ever taken. . . . I would never be where I am today if it wasn’t for you. For that, I am more grateful to you than I can express.’’

“Living in Exile,’’ the play of which Mr. Lipsky often said he was the most proud, is being produced anew by the Actors’ Shakespeare Project at the Storefront in Davis Square in Somerville. In January, a different company produced “Exile’’ in New York City, and a new production of his play “Walking the Volcano’’ will open next month at the Boston Playwrights’ Theater at BU.

“His writing was always very accessible,’’ said writer and producer Arnie Reisman of Natick, a panelist on the public radio show “Says You’’ and a friend since 1970, when he hired Mr. Lipsky to write for Boston After Dark, a precursor to today’s Boston Phoenix. “He had a really good ear for dialogue and a very good understanding of how people interact with each other, so he could create scenes that were very realistic.’’

Born in New York City, Mr. Lipsky was the second of three sons and grew up in the Upper West Side of Manhattan, where his mother was a psychiatric social worker.

“Our father was a novelist as well as an attorney, and we grew up in a house where the writing life was familiar to us,’’ said Mr. Lipsky’s older brother, Michael of Vienna, Va.

“Jon was a quick study,’’ his brother said. “He had an intelligence that allowed him to take an enormous range of subjects and master them for the purposes of his art.’’

For plays and adaptations, Mr. Lipsky chose topics including Homer’s epic poem “The Iliad,’’ the killing fields of Cambodia in the 1970s, and the world of Jack London, along with a long list of scientific matters at the Museum of Science, where he was a playwright and artist-in-residence. He also was playwright and director for the Boston History Collaborative and formerly was playwright-in-residence at the Merrimack Repertory Theatre in Lowell.

He began preparing for a life in the theater by graduating from the Bronx High School of Science in New York City and heading to Oberlin College in Ohio, where he received a bachelor’s degree in English in 1965. Two years later, he graduated with a master of fine arts from the Writers’ Workshop at the University of Iowa. Then he joined the Peace Corps and spent a couple of years in India before moving to Boston, where one of his brothers lived.

His first marriage, to Jeanne Baker, ended in divorce.

Mr. Lipsky became the in-house dramatist for TheaterWorks in Boston, which was formed in the late 1970s, and his early plays included “Beginner’s Luck,’’ “A Matter of Ecstasy,’’ and “They All Want to Play Hamlet.’’ Other plays included “Dreaming With an AIDS Patient,’’ “Maggie’s Riff,’’ and “Molly Maguire.’’

In 1982, he met Karen Shigley, who now uses the first name Kanta, at a meeting of antinuclear activists on Martha’s Vineyard. They married in 1984 and moved to the Vineyard permanently in 1996.

Mr. Lipsky, she said, was admired on the Vineyard for his gardening, particularly the rich harvest he coaxed from his asparagus patch. He cultivated friendships and conversations with the same care.

“He had a very strong command of the room when he wanted it,’’ said his son Adam, of West Tisbury. “He was very articulate, but not by speaking too much. He would consider what he was trying to say and put it in concise words.’’

In addition to his wife, son, and brother, Mr. Lipsky leaves another son, Jonah of West Tisbury, and another brother, David of New York City.

A memorial service will be held at 11 a.m. today in the Martha’s Vineyard Hebrew Center in Vineyard Haven, followed by burial in the West Tisbury Cemetery.

“He was so active in guiding the careers of playwrights, as well as doing his own work, which I don’t think is sufficiently appreciated as both a playwright and director,’’ said Robert Brustein, founding director of the American Repertory Theater and distinguished scholar in residence at Suffolk University. “The quality of the man and the quality of the intellect and the quality of the talent are really something very special. He could have gone anywhere, and chose to stay here.’’

And for that choice, many of Mr. Lipsky’s friends and collaborators are thankful.

“It was impossible to be too unhappy in his presence, and I’m an expert at being too unhappy,’’ Epstein said. “He swept that all away. His optimism and his strength were so infectious. Working with him was the greatest moment of my professional life. I never will forget it and, I think, I never will equal it.’’