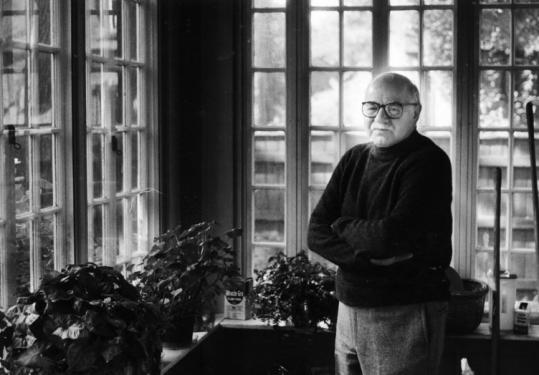 Daniel Bell, the Henry Ford II Professor of Social Sciences emeritus at Harvard University and one of America’s most dynamic thinkers, died Tuesday after a short illness at his Cambridge home, said his daughter, Jordy. He was 91.

In a 1992 Globe interview, Dr. Bell attributed his singular intellectual exuberance to his youth in Depression-era New York.

“I grew up on the Lower East Side . . . and I always had curiosity,’’ he said. “Why was I this way? It began with the Depression: ‘Why was there a Depression? Why are people hungry? It’s supposed to be a great country.’ Once you get that tick of curiosity, it stays with you.’’

It was a mark of Dr. Bell’s eminence that the titles of his three best-known books — “The End of Ideology,’’ “The Coming of Post-Industrial Society,’’ and “The Cultural Contradictions of Capitalism’’ — went on to assume a life of their own as discrete phrases in the intellectual vocabulary.

While a graduate student in sociology at Columbia, Dr. Bell was asked to describe his specialty. “I specialize in generalizations,’’ he replied. In an academic world of increasing specialization and ever-narrowing scope, Dr. Bell was a proud anachronism: displaying a rare intellectual ambition, assimilative power, and range of interests.

As Peter Steinfels notes in his book “The Neoconservatives,’’ Dr. Bell’s work embodies “an amassment and mobilization of data reminiscent of the great figures of Victorian social science.’’

Dr. Bell earned his place in a book of that title because he founded The Public Interest quarterly with Irving Kristol in 1965, then edited the journal with Kristol until 1973.

The aim of The Public Interest, as Dr. Bell wrote in 1984, “was to transcend ideology through reasoned public debate and the inquiry into knowledge.’’ Yet its analyses and critiques of social policy did much to foster ideology, and The Public Interest proved to be the foremost organ of neoconservatism. It was Dr. Bell’s growing ideological differences with Kristol, the celebrated “godfather of neoconservatism,’’ that led him to leave the publication.

Dr. Bell described himself as “a socialist in economics, a liberal in politics, and a conservative in culture.’’

The book that largely established Dr. Bell’s reputation, “The End of Ideology’’ (1960), had famously made plain his preference for analysis over polemic. It looked at a wide variety of aspects of contemporary society, but it was the title essay that received the widest attention.

“The problems which confront us at home and in the world are resistant to the old terms of ideological debate ‘left’ and ‘right,’ ’’ he wrote, and if that view found itself at odds with much that was to follow in the ’60s, it logically followed from Dr. Bell’s own background.

He was born in New York City, the son of Benjamin Bolotsky and Anna (Kaplan) Bolotsky. It was young Daniel’s uncle who changed the family name to Bell. Dr. Bell spoke Yiddish until the age of 6, but by his teens, he was speaking English well enough to give street-corner speeches for radical political candidates. He graduated from City College of New York at 19, with a bachelor of science degree in sociology.

Among his fellow students were literary critic Irving Howe; Nathan Glazer, who would later be a Harvard colleague (and Cambridge neighbor); sociologist Seymour Martin Lipset; and Kristol. All belonged to the influential body of writers and thinkers who would come to be known as “the New York intellectuals.’’

Largely Jewish and, at least initially, almost exclusively of the left, they placed a premium on argumentative brilliance and relished no-holds-barred debate. They constituted “a herd of independent minds,’’ as one of their members, the art critic Harold Rosenberg, put it.

Dr. Bell emerged as one of the group’s leading lights. A factor in his perhaps wishful views on “the end of ideology’’ was exposure to the herd’s many stampedes.

During the ’40s and ’50s, Dr. Bell switched back and forth between academe and journalism. The two backgrounds shaped his overall intellectual approach, one in which a journalistic love of topicality and crispness united with a professorial attachment to conceptualization and a broad grounding in culture.

Dr. Bell took graduate courses in sociology at Columbia University and began writing for The New Leader magazine. Exempted from military service for medical reasons during World War II, he served as the magazine’s managing editor from 1941 to 1944, switching to a comparable position at the magazine Common Sense in 1945. That same year, he became an instructor at the University of Chicago.

In 1948, Fortune magazine hired Dr. Bell as its labor editor, a post he held for 10 years. He became a part-time instructor in sociology at Columbia in 1952 and, starting in 1956, spent 18 months conducting seminars for the Congress for Cultural Freedom. In 1959, he became an associate professor at Columbia, receiving his PhD there the next year and acquiring full professor status in 1962. During the 1968 uprising at the university, Dr. Bell played a part in negotiations between students and faculty. He came to Harvard in 1969 and retired in 1990.

Dr. Bell’s futurist bent took its most notable form in “The Coming of Post-Industrial Society’’ (1973). That book’s vision of an information-based, knowledge-driven economy has become a commonplace of educated opinion.

Dr. Bell was a fellow of the American Academy of Arts and Sciences and a member of the Century Association of New York, the American Philosophical Society, and the American Sociological Association. During the 1987-88 academic year, he held the prestigious post of Pitt Professor of American Institutions at Cambridge University.

In addition to his daughter, of Croton-on-Hudson, N.Y., he leaves his wife, the literary critic Pearl (Kazin) Bell; a son, David of Princeton, N.J.; four grand- children; and one great-grandchild.

The funeral will be private. A memorial service will be held in the spring.