Cookie Gilchrist; displayed grit on gridiron and in fighting racism 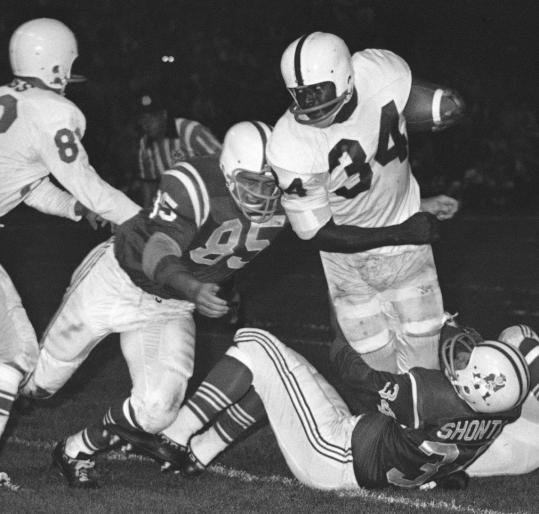 One of the American Football League’s first marquee players, he was a 251-pound bruiser whose ferocious running style drew comparisons to that of the great Jim Brown. His grit and single-mindedness extended beyond the field; he took stands against racism and was not afraid to demand better contracts.

“The were very lucky to have procured the services of Cookie Gilchrist, who was one of the greatest fullbacks I have ever seen in all of my years in professional football,’’ said Ralph Wilson, the 92-year-old Buffalo owner.

Carlton Chester “Cookie’’ Gilchrist joined the Bills of the AFL in 1962 and spent three seasons there. He was the league’s player of the year in 1962, when he had 1,096 yards rushing and a league-leading 13 touchdowns. In 1964, Mr. Gilchrist and quarterback Jack Kemp led the Bills to their first of two straight AFL championships.

Before joining the Bills he spent six years in the Canadian Football League, where he is regarded as one of its top two-way players.

Cornerback Booker Edgerson, a former Bills teammate, said Mr. Gilchrist was “just as good and maybe even better’’ than Brown. “He and Jim had the same outstanding abilities to play the game,’’ he added.

Edgerson noted that Mr. Gilchrist also starred at linebacker in the CFL and wanted to play the position in Buffalo.

“Yeah, he was tough,’’ Edgerson said. “If they would’ve allowed him to play linebacker, he would’ve kicked a lot of butt.’’

Mr. Gilchrist led the AFL in yards rushing from 1963-65 and in touchdowns from 1962-64. His most notable game came in Buffalo’s 45-14 win over the in 1963. He set a pro football record with 243 yards rushing and became only the fourth player to score five touchdowns.

After Buffalo, Mr. Gilchrist spent two seasons with Denver and one with Miami.

Larry Felser, football writer for the Buffalo News until his retirement, covered Mr. Gilchrist during his days with the Bills and regards him as the best to play the game. Felser wrote in 2004: “Any time. Any place. Any brand of football. Cookie was, pound for pound, the greatest all-around player I ever saw. He would be a superstar in today’s football.’’

Mr. Gilchrist also displayed a different kind of toughness. He and a group of black players boycotted the 1965 AFL All-Star Game in New Orleans after they weren’t allowed into a bar and had difficulty catching taxicabs. The game was moved and played in Houston.

Mr. Gilchrist is the only player to turn down induction into the Canadian Football Hall of Fame. He cited racism and exploitation by team management.

Mr. Gilchrist had a long-running feud with Wilson after the team waived him in 1964. Mr. Gilchrist refused to return to Buffalo to attend alumni functions unless he was paid. Mr. Gilchrist and Wilson finally settled their differences last week during a phone conversation, Thomas Gilchrist said.

“I’m glad they had that conversation,’’ Edgerson said. “When I visited him, he told me, ‘I’ve got to bury the hatchet with Mr. Wilson.’ ’’

Edgerson called Mr. Gilchrist a unique individual who wasn’t afraid to speak out for better pay.

“He was 30 years ahead of his time,’’ Edgerson said. “He believed in what he did, good, bad, or indifferent.’’

Mr. Gilchrist was a four-time AFL Pro Bowl selection. He and O.J. Simpson are the only Bills players to run for touchdowns in seven straight games, and Mr. Gilchrist’s 128 points in 1962 is the fourth-highest single-season total.

Born in Brackenridge, Pa., Mr. Gilchrist was 18 when he was lured out of high school by the . He failed to make the team and that led him to Canada, where he played with Hamilton, Saskatchewan, and Toronto.

Mr. Gilchrist was a six-time division all-star, five times as a running back and once as a linebacker.

The Toronto Argonauts media guide refers to him as a “charismatic and volatile free spirit, who many claim was the best all-around athlete to ever play for the Argos.’’

Mr. Gilchrist leaves his sons Jeffrey and Scott and daughter Christina Gilchrist, all of Toronto, and two grandchildren.