Rich beyond counting with compassion for the poor

Tom White, one of Boston’s greatest philanthropists, dies at the age of 90 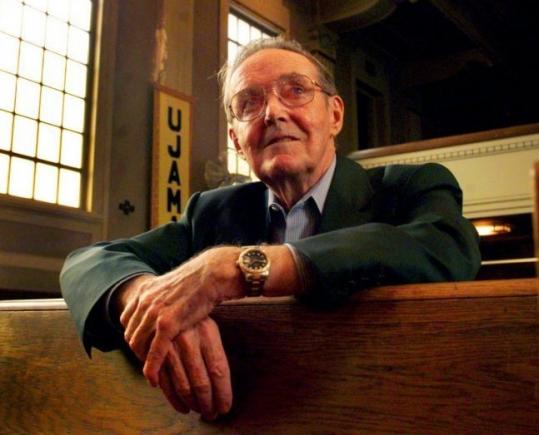 How much money did Tom White give away before he died yesterday at 90? More than $75 million over his lifetime, he estimated several years ago, but the total is difficult to gauge because he started sending checks to charities as a young man, when his savings barely topped $1,000 and he did not know his gifts would some day measure in the millions of dollars.

How many lives did he save or improve? No easy answers there, either.

Partners in Health, which he helped found in 1987 and to which he gave millions, has saved uncounted lives in Haiti and other developing countries where the poor die of illnesses such as drug-resistant tuberculosis and AIDS.

And Mr. White contributed to dozens of other charities, nudging a seemingly endless stream of lives in new directions simply by keeping a wad of bills in his pocket. He would slip a $20 bill to the employee cleaning toilets at McDonald’s. Once, a homeless woman in Harvard Square told him her life would be better if she had a red wagon to cart redeemable bottles. She burst into tears the next day when he showed up pulling a red wagon.

Mr. White, who made his fortune building J.F. White Contracting into one of Boston’s biggest companies, said that after making sure his family was taken care of financially, he set out to die as close to penniless as possible. With his family by his side, he died yesterday morning at his home in the Auburndale neighborhood of Newton.

He lived his life with but a single regret.

What he handed out had a ripple effect beyond the immediate lives he saved, said Dr. Jim Yong Kim, the president of Dartmouth College who was at the inception of Partners in Health with Mr. White, Dr. Paul Farmer, Ophelia Dahl, and Todd McCormack.

Long before global health became a more popular cause, Kim said, Mr. White blazed a trail for philanthropists by funding Partners in Health initiatives that showed it was possible, for example, to help those suffering from drug-resistant tuberculosis in Peru.

“Tom was, in fact, the real patron saint of hopeless causes,’’ Kim said. “He allowed us to tackle what are quite literally the most difficult health problems in the world.’’

Tracy Kidder, a Pulitzer Prize-winner whose 2003 book "Mountains Beyond Mountains" chronicled the birth and growth of Partners in Health, and was awarded a Pulitzer Prize, said Mr. White told wonderful stories of his work with the organization.

“And running underneath it was this mystery to me: ‘Why did you give away all this loot?’ ’’ he said. “I’m sure there’s not a simple answer to that. I had the feeling that he was really deeply upset by the unfairness of the world and its grotesque disparities.’’

Mr. White had little interest in any acclaim that might come his way, and he even avoided many face-to-face meetings that would allow beneficiaries of his generosity to say thanks. That might have been because he was so sensitive to their plight.

“After a while, we tried to limit his trips to Haiti, because it pained him so much,’’ Kim said. “No matter where he was, every morning he would wake up and start his day thinking about the suffering of the poor. I have never, ever seen a person like that before, where the reality of the pain of others was with him all the time.’’

“He listened to people’s stories and in many ways reacted physically to other people’s suffering,’’ said Dahl, executive director of Partners in Health. “He couldn’t bear it.’’

Mr. White grew up in Cambridge, where, he later said, his parents seemed indifferent to their children, except when his father was drunk and angry.

“I said to myself, ‘My kids were never going to go to bed unhappy,’ ’’ he told the Globe in 1999. In his Harvard class reports, he often noted that his family was the most important part of his life, ahead of work.

He graduated from Cambridge Latin School and received a bachelor’s degree from Harvard College in 1942. A week later he was in the US Army, serving as an officer and a paratrooper in World War II. Mr. White was an aide to Brigadier General Maxwell Taylor, who would become Joint Chiefs of Staff chairman in the Kennedy administration; for his service he was awarded a Silver Star and a Bronze Star with an oak leaf cluster.

Back home, he revived the family construction business his father had let languish. In various capacities, including as majority owner and chief executive, he led the company as it built, among other things, the Charles River Dam, Foxboro Stadium, the Park Plaza Hotel, and part of Boston’s subway system.

Gradually, he turned his attention to philanthropy and stopped spending time with others as affluent as he. “With them,’’ he told the Globe in 2004, “it’s all about me, me, me.’’

He married Margaret Flynn in 1947, and they had seven children before they divorced.

In 1971, he married Lois Driscoll. Between them, they had 13 children, 35 grandchildren, and eight great-grandchildren.

A service will be announced for Mr. White, who in addition to his wife leaves four daughters, Carol of Carlisle, Denise of Foxborough, Janice Fiske of Hingham, and Christina of Canton; three sons, Peter of Westwood, Kevin of Dover, and Stephen of Norwell; and two sisters, Margaret Casey of Duxbury and Mary Lyons of Walpole.

Mr. White’s philanthropy, particularly with Partners in Health, “was based on this radical notion that the poorest of the poor deserve everything we can provide for them,’’ Kim said, and that “led to fundamental changes in the way we thought about what was possible in the poorest countries.’’

Kim added that when his mother, a theologian, met Mr. White, “she said to me, ‘You know, I’ve only in my life met one living saint, and that’s Tom White.’ ’’

Correction: Because of a reporting error, this story incorrectly listed the book for which Tracy Kidder won the Pulitzer Prize. He was awarded a Pulitzer for "The Soul of a New Machine."