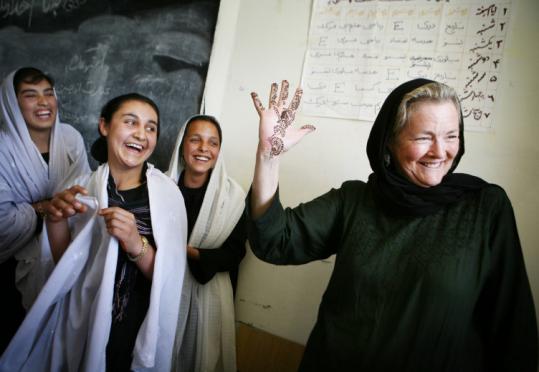 Sally Goodrich showed her henna painting by an Afghan student in the school she sponsored in Logar Province. “These students take risks every day just to go to school,’’ she said. (Jean Chung for The Boston Globe/ File 2007)
By Bryan Marquard Globe Staff / December 23, 2010

Preparing to leave for Afghanistan three years ago to visit a school for girls she founded with her husband, Sally Goodrich tucked into her suitcase bottles filled with maple syrup the couple made from sap that flowed from trees behind their home in Bennington, Vt.

She also packed compassion born of an effort to create a meaningful legacy for her eldest son, Peter, who was killed in the Sept. 11, 2001, terrorist attacks, and carried with her the kind of courage it takes to travel to a country still ravaged by terror and war.

“These students take risks every day just to go to school,’’ she told the Globe in 2007 as she made room for the syrup among books and medicine, “so I am going to take a risk to be there with them. I have to go.’’

Mrs. Goodrich, an educator in the North Adams school district who cofounded the Peter M. Goodrich Memorial Foundation, died of cancer Saturday in her Bennington home. She was 65.

“This isn’t just my journey, it’s Peter’s journey,’’ she told the Globe after arriving in Afghanistan on that trip in 2007, when roadside explosions, suicide bombings, and deteriorating security led Afghan advisers to suggest she skip visiting the school she helped found.

Peter, who lived in Sudbury, was aboard United Airlines Flight 175, the second plane to crash into the World Trade Center towers in New York City.

And so she did, though moving forward to confront challenges and help those in need was hardly a new experience.

“It’s a difficult balance for me and my family right now because we don’t like the death of our son to define my wife’s life,’’ said her husband, Donald. “That’s what people remember her for, but she was a dynamic lover of people the whole 65 years of her life, not just the last nine and a half.’’

Both her husband and Peter had struggled with dyslexia, which provided Mrs. Goodrich’s professional focus.

“She was, first and foremost, a remedial reading teacher for younger elementary students who had difficulty reading,’’ her husband said. “That was her passion.’’

Sarah Wales Donavan, always known as Sally, was born in Newton, which bothered her a bit because her family moved to Bennington when she was very young and she always considered herself a Vermonter.

After high school, her studies took her first to Connecticut College in New London, then to Castleton State College in Vermont, then to the University of Vermont, from which she graduated in 1967 with a bachelor’s in sociology.

She had married Donald Goodrich in 1964, and by the time she graduated, she was pregnant with Peter.

Mrs. Goodrich spent much of their early married years raising Peter and his younger brother, Foster. Still, she managed to receive a master’s in education from Boston University in the late 1960s and a master’s as a reading specialist from Simmons College in the 1990s.

In the late 1970s, she began teaching in a program for troubled adolescents in North Adams, and taught reading in elementary schools in the region for many years before becoming the Title I coordinator for the North Adams schools. Last year, she received an honorary doctorate from the Massachusetts College of Liberal Arts in North Adams.

After Peter was killed, “there were some things we could not, not do, notwithstanding the near paralysis that comes with the event of losing your oldest child in a terrorist attack,’’ her husband said.

A lawyer, he became involved in the legal complexities that unfolded in the compensation funds for victims.

But just months after Peter’s death, Mrs. Goodrich learned she had ovarian cancer. With the diagnosis came treatment, chemotherapy, and crushing grief that prompted thoughts of suicide.

“Everything was destroyed,’’ she told the Globe. “My life, my faith, my ability to live. I had nothing left.’’

Then in August 2004, a friend of Peter’s who served as a Marine major in Afghanistan sent an e-mail asking the Goodrich family to collect supplies for the children of a village in dire need of assistance.

“That was the beginning,’’ she told the Globe. “I call it the moment of grace. I knew Peter would have responded to that e-mail. I knew I had to in his name. For the first time, I felt Peter’s spirit back in my life.’’

Peter had read widely, including the Koran, “and was always searching for a better understanding of the human condition,’’ his father said. “Suddenly it shone upon us that here is a path that Peter would be on. Because he would be on that path, we were going to take it.’’

To honor his memory, the couple created the Peter M. Goodrich Foundation, conducted fund-raising to build a school for 500 girls in Logar Province, and raised additional money to fund two schools and an orphanage in Wardak Province.

“She was a natural organizer, and that’s even the wrong term,’’ her husband said. “I’ve used the term pied piper before. She really organized people. She saw a need or saw something that would be fun, and that big old Irish smile would come out and things would happen.’’

In addition to her husband, her son, Foster Hetherington of Bennington, and her daughter, Kim Trimarchi of Adams, Mrs. Good rich leaves three brothers, Peter and Mark Donavan of Bennington and Jed Donavan of Hoosick Falls, N.Y.; and five grandchildren.

A memorial service will be held at 3 p.m. today in Old First Church in Bennington, and in Mrs. Goodrich’s memory the family will host an Irish celebration afterward at the church barn on Monument Circle. Burial will be private.

For Mrs. Goodrich, the ache of loss and her subsequent work in Afghanistan became, in retrospect, almost a spiritual path she seemed destined to follow.

“I wouldn’t say it was a journey of faith, but I would say it was a journey that restored my faith,’’ she told the Globe in 2007. “And it also changed my faith. I think about my faith, and I think about God in more open ways than I did before. I don’t know how to explain it except to say that my faith is now about action to help people. Helping these children with education, which is the future of Afghanistan, gave us our lives back. I’m so lucky to have found that. I don’t know how to thank them.’’