Kevin McNicholas, a gravel-voiced radio reporter who was dean of the State House press corps, died yesterday after a short fight with an aggressive form of bladder cancer. He was 61.

Observer of every governor and legislator since Frank Sargent, Mr. McNicholas worked as a contract reporter for stations across Massachusetts. He also covered 11 national political conventions, the courts, Boston City Hall, the school busing crisis, and the 1976 Tall Ships visit.

He was known for his pleasant demeanor yet penetrating questions — a skill remarked on not just by politicians but also the oncologist who treated him since his diagnosis in September.

Mr. McNicholas died at Massachusetts General Hospital in the company of his sister, Ann Duffy; her husband; WBZ-AM reporter Carl Stevens; and a Roman Catholic priest.

“Kevin was an institution at State House press conferences,’’ Governor Deval Patrick said in a statement. “He was a great journalist who could usually be found sitting on the floor in the front of the room, manning his recorder and armed with the most substantive and insightful questions. But more importantly, he was a sweet man with a generous spirit and a ready smile.’’

Senator John F. Kerry, who first dealt with Mr. McNicholas as lieutenant governor, said: “Kevin could always be found where the news was happening. He was an institution around Massachusetts politics and we will miss him greatly.’’

A resident of Boston, Mr. McNicholas grew up in Wakefield after he and Duffy were adopted by a restaurant manager and a schoolteacher. He recalled getting autographs from Ricky Nelson and Don Ameche as the celebrities visited Pleasure Island.

He attended Northeastern University and was slated to graduate in 1973 when he found he was lacking a required English course. It meant he missed the pomp and circumstance of the usual graduation ceremonies.

“It was a disappointment to my parents, but they’d been to Boston Garden before,’’ he told a friend who sat with him in his hospital room Wednesday.

Mr. McNicholas broke into reporting through a Northeastern co-op stint at WHDH-TV. After working as a news writer and assignment editor, he decided his physical features were better suited for radio and started working at the State House with a boost from longtime columnist Wendell Woodman.

His career took him across the gubernatorial spectrum, covering Democrats such as Michael Dukakis and Republicans William F. Weld and Mitt Romney.

On the national front, he recalled covering the 1976 political conventions in New York City and Kansas City, Mo.

While he lived alone in Allston and had no car, Mr. McNicholas ventured out. His made weekend ski trips to New Hampshire and summer visits to the beach. He also was a frequent Massachusetts Bay Transportation Authority rider, including quietly riding the Green Line to MGH last week when he felt fatigue and shortness of breath.

“I didn’t want to bother anybody,’’ he said.

Mr. McNicholas remained a smoker to the near-end, an acknowledged bad habit that developed the resonance of his voice. Yet he broke free of another vice, alcohol, after years of bad drinking behavior persuaded him to quit cold turkey in 1994. He did so after traveling alone to Cambridge Hospital and checking himself in.

“I knew I had come to the end of my drinking days. I went over on a train, I was there for a week, and I never picked up another drink,’’ Mr. McNicholas said.

On his final full day alive, Mr. McNicholas recited phone numbers from memory as he asked his friend to help him call several of his longtime acquaintances. While he knew his cancer had spread quickly, Mr. McNicholas had no official prognosis the end was near.

Nonetheless, he told the people he called, who stopped by to say hello or who called him — including Senator Scott Brown and Senate President Therese Murray — that he wanted to say his goodbyes so he had no regrets. 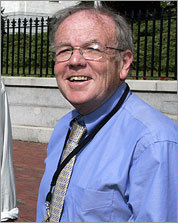