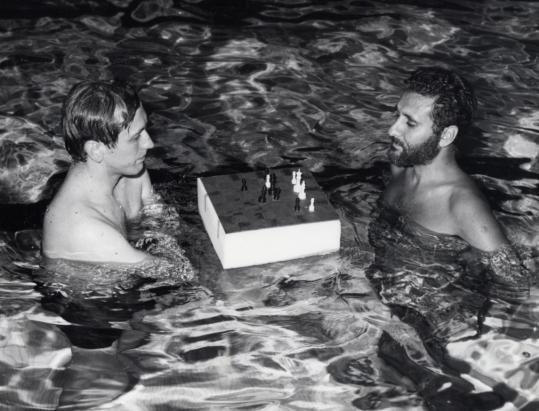 In the Catskills, Bobby Fischer got help from Larry Evans in preparing for an upcoming match. (Upi/File 1971)
By Dylan Loeb McClain New York Times / November 19, 2010

NEW YORK — Larry Evans, a five-time US chess champion and prolific writer who helped Bobby Fischer win the world championship in 1972, died Monday in Reno. He was 78.

Mr. Evans, who lived in Reno, died of complications of gall bladder surgery, according to the website of the US Chess Federation, the governing body for the game.

Though Mr. Evans was a grandmaster, he was best known for his chess writing. He had a syndicated column for decades and wrote more than 20 books, among them “New Ideas in Chess,’’ “Modern Chess Brilliancies,’’ and “The 10 Most Common Chess Mistakes.’’

Mr. Evans was an editor of the 10th edition of “Modern Chess Openings,’’ long a mainstay for tournament players. He also founded American Chess Quarterly and edited it from 1961 to 1965. The book that Mr. Evans was probably most famous for was one on which he assisted: Fischer’s “My 60 Memorable Games.’’ He cajoled and exhorted Fischer to finish the book, edited and helped him with the prose, and wrote introductions to all the games.

Typical of Mr. Evans’s style was the introduction to Game 9 against Edgar Walther, in which Fischer escaped with a draw: “What makes this game memorable is the demonstration it affords of the way in which a grandmaster redeems himself after having started like a duffer; and how a weaker opponent, after masterfully building a winning position, often lacks the technique required to administer the coup de grace.’’

During Fischer’s prelude to the world championship, Mr. Evans was what is known in chess as his second. He helped him train and prepare for his matches against Mark Taimanov, Bent Larsen, and Tigran Petrosian.

Before the championship match in Reykjavik, Iceland, in 1972 against Boris Spassky, Mr. Evans and Fischer had a falling out. Frank Brady, Fischer’s biographer, speculated that the rift was over Mr. Evans’s desire to have his wife, Ingrid, accompany them on the trip, which lasted more than two months.

Larry Melvyn Evans was born in New York. Growing up, he hustled games for dimes on 42nd Street. He won the championship of the prestigious Marshall Chess Club on West 10th Street at 15 and was New York state champion by 18. In 1950, he played for the US team in the biennial Chess Olympiad in Dubrovnik, Yugoslavia, and took an individual gold medal. He went on to play on seven more Olympiad teams, including the one that won the gold medal in Haifa, Israel, in 1976.

In 1951, at 19, he won his first US championship. He defended the title a year later in a match against Herman Steiner. He won the title again in 1961, 1968, and 1980, when he tied for first with Walter Browne and Larry Christiansen. He also won four US Open championships. The World Chess Federation awarded him the title of grandmaster in 1957.

In the 1960s, Mr. Evans moved to Reno when he discovered he had another talent: counting cards.

“He had a memory that he built up from chess,’’ Brady said. “He could memorize cards, and he wasn’t making any money from chess in those days. Nobody was.’’

His other profession did not last. “He made a lot of money and he kept getting banned from casino to casino,’’ Brady said.

Mr. Evans had a few successes in international tournaments, among them a first at Portimo, Portugal, in 1975. But he rarely played internationally, and in his one attempt to qualify for the world championship, at the Amsterdam Interzonal in 1964, he finished 14th.

Anthony Saidy, an international master who knew Mr. Evans for many years, said the risk-taking that made Mr. Evans successful in tournaments in the United States did not work as well against the very best players. But he was still a formidable player.

“He was one of the very few American grandmasters that I couldn’t beat, ever.’’