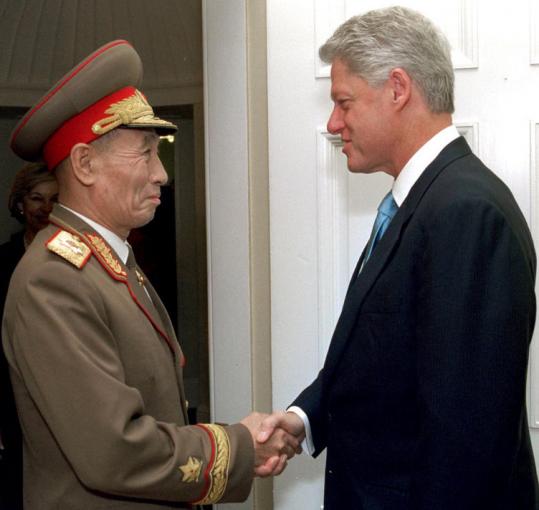 SEOUL — Top North Korean military official Jo Myong Rok, a longtime confidant of leader Kim Jong Il who traveled to Washington in 2000 on a then-unprecedented goodwill mission, has died. He was 82.

Mr. Jo, who was vice marshal of the Korean People’s Army and held the number two post on the powerful National Defense Commission behind Kim, died Saturday of heart disease, the official Korean Central News Agency reported from Pyongyang.

“His death is a great loss to the party, the army, and people of [North Korea] waging a dynamic struggle to win the victory of the cause of building a thriving socialist nation,’’ the dispatch said.

Mr. Jo, a Korean War veteran, paid a rare visit to Washington in October 2000 as Kim’s special envoy, meeting during that trip with then-President Clinton. He also later pledged to Madeleine Albright, who was secretary of state, that North Korea would take steps to improve relations fundamentally in the interests of peace and security.

Mr. Jo was the highest-level North Korean official to visit Washington, and his trip — followed by Albright’s landmark visit to Pyongyang — was part of North Korea’s efforts to keep up the momentum generated by a breakthrough summit between Kim and South Korean President Kim Dae-jung held earlier that year. Mr. Jo arrived at the State Department for his meeting with Albright in a dark business suit. But for his talks at the White House, he changed into full military dress, complete with a high-brimmed cap — a change of outfit that suggested he wanted to project a tougher line in talks with Sandy Berger, then national security adviser.

It was later that day, at a banquet in his honor hosted by Albright, that Mr. Jo invited the secretary of state to visit Pyongyang, and, in her return toast, Albright accepted.

However, the reconciliatory mood between the wartime foes shifted dramatically after former President George W. Bush took office, enforcing a tougher line against North Korea. Relations have also been strained over North Korea’s nuclear-weapons program, and Pyongyang and Washington still do not have formal diplomatic ties.

North and South Korea remain in a state of war because their conflict in the early 1950s ended with an armistice, not a peace treaty. The US stations 28,500 troops in South Korea to deter against any aggression.

Mr. Jo was born into a peasant’s family in Yonsa County in North Hamgyong Province, the news agency said. He served as a pilot during the war, which North Korea refers to as the “Fatherland Liberation War,’’ and later rose to the position of chief of staff and commander of the air force of the Korean People’s Army, state media said.

Mr. Jo’s body will lie in state at Pyongyang’s Central Hall of Workers to receive mourners before a state funeral Wednesday, the news agency said. Kim and his son and heir apparent, Kim Jong Un, are among members of the funeral committee, it said.

In addition to the number two job on the defense commission, Mr. Jo also served as a deputy to the Supreme People’s Assembly and as a member of the politburo of the ruling Workers’ Party, the news agency said.

Reports about Mr. Jo’s public activities had been infrequent in recent years, sparking speculation in South Korea media about his health and a possible change in Pyongyang’s power structure.

His death comes amid a succession movement in North Korea, which has been ruled by the Kim family since the late President Kim Il Sung founded the nation in 1948. His son Kim Jong Il took over after his father’s death in 1994. Grandson Kim Jong Un was promoted to key posts within the ruling Workers’ Party in September, and since last month has accompanied his father to key functions.