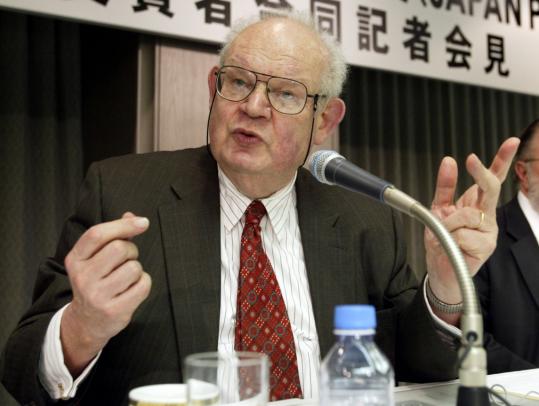 NEW YORK — Benoît B. Mandelbrot, a maverick mathematician who developed an innovative theory of roughness and applied it to physics, biology, finance, and many other fields, died Thursday in Cambridge, Mass., where he resided. He was 85.

He had pancreatic cancer, said his wife, Aliette.

Dr. Mandelbrot coined the term “fractal’’ to refer to a new class of mathematical shapes whose uneven contours could mimic the irregularities found in nature.

“Applied mathematics had been concentrating for a century on phenomena which were smooth, but many things were not like that: The more you blew them up with a microscope the more complexity you found,’’ said David Mumford, a professor of mathematics at Brown University. “He was one of the primary people who realized these were legitimate objects of study.’’

In a seminal book, “The Fractal Geometry of Nature,’’ published in 1982, Dr. Mandelbrot defended mathematical objects that he said others had dismissed as “monstrous’’ and “pathological.’’ Using fractal geometry, he argued, the complex outlines of clouds and coastlines, once considered unmeasurable, could now “be approached in rigorous and vigorous quantitative fashion.’’

For most of his career, Dr. Mandelbrot had a reputation as an outsider to the mathematical establishment. As a researcher for in New York, where he worked before accepting a position at Yale University, he noticed patterns that other researchers may have overlooked in their own data, then often swooped in to collaborate.

“He knew everybody, with interests going off in every possible direction,’’ Mumford said. “Every time he gave a talk, it was about something different.’’

Dr. Mandelbrot traced his work on fractals to a question he first encountered as a young researcher: How long is the coast of Britain? The answer, he discovered, depends on how closely one looks. On a map an island may appear smooth, but zooming in will reveal jagged edges that add up to a longer coast.

“Here is a question, a staple of grade-school geometry that, if you think about it, is impossible,’’ Dr. Mandelbrot told The New York Times earlier this year in an interview. “The length of the coastline, in a sense, is infinite.’’

In the 1950s, Dr. Mandelbrot proposed a simple but radical way to quantify the crookedness of such an object by assigning it a “fractal dimension,’’ an insight that has proved useful well beyond the field of cartography.

Over nearly seven decades, working with dozens of scientists, Dr. Mandelbrot contributed to the fields of geology, medicine, cosmology, and engineering. He used the geometry of fractals to explain how galaxies cluster and how wheat prices change over time, among other phenomena.

His influence has also been felt within the field of geometry, where he was one of the first to use computer graphics to study mathematical objects like the Mandelbrot set, which was named in his honor.

“I decided to go into fields where mathematicians would never go because the problems were badly stated,’’ Dr. Mandelbrot said. “I have played a strange role that none of my students dare to take.’’

Benoît B. Mandelbrot was born on Nov. 20, 1924, to a Lithuanian Jewish family in Warsaw. In 1936 his family fled the Nazis, first to Paris and then to the south of France, where he tended horses and fixed tools.

After the war he enrolled in the École Polytechnique in Paris, where his sharp eye compensated for a lack of conventional education. His career soon spanned the Atlantic. He earned a master’s degree in aeronautics at the California Institute of Technology, returned to Paris for his doctorate in mathematics in 1952, then went on to the Institute for Advanced Study in Princeton, N.J., for a postdoctoral degree.

After several years spent largely at the Centre National de la Recherche Scientifique in Paris, Dr. Mandelbrot was hired by IBM in 1958. Although he worked frequently with academic researchers and served as a visiting professor at Harvard and MIT, it was not until 1987 that he began to teach at Yale.

Dr. Mandelbrot received more than 15 honorary doctorates and served on the board of many scientific journals, as well as the Mandelbrot Foundation for Fractals. Instead of rigorously proving his insights in each field, he preferred, he said, to “stimulate the field by making bold and crazy conjectures’’ — and then move on before his claims had been verified. This habit earned him some skepticism in mathematical circles.

“He doesn’t spend months or years proving what he has observed,’’ said Heinz-Otto Peitgen, a professor of mathematics and biomedical sciences at the University of Bremen. And for that, he said, Dr. Mandelbrot “has received quite a bit of criticism.

“But if we talk about impact inside mathematics, and applications in the sciences, he is one of the most important figures of the last 50 years.’’

Besides his wife, Dr. Mandelbrot leaves two sons, Laurent, of Paris, and Didier, of Newton, Mass., and three grandchildren.

When asked to look back on his career, Dr. Mandelbrot compared his own trajectory to the rough outlines of clouds and coastlines that drew him into the study of fractals in the 1950s.