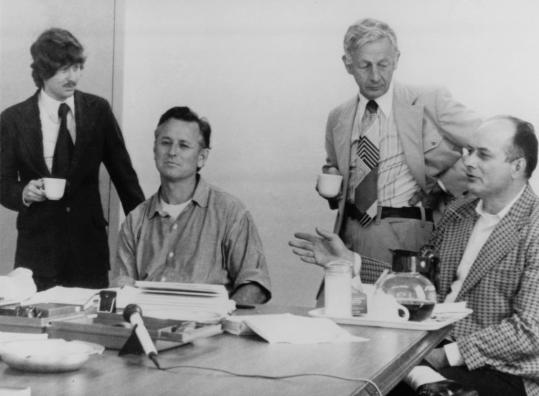 NEW YORK — Jack Kershaw, who represented James Earl Ray as he fought to overturn his conviction in the assassination of the Rev. Martin Luther King Jr., arguing that Ray was an innocent participant in a conspiracy led by a mysterious figure named Raul, died Sept. 7 in Nashville. He was 96.

His death was announced by the League of the South, an organization Mr. Kershaw helped found that tries to keep the spirit of the Confederacy alive.

Mr. Kershaw, who was also a sculptor, was best known in his hometown for creating a 27-foot equestrian statue of Confederate General Nathan Bedford Forrest, a founder of the Ku Klux Klan. Unveiled in 1998, it was erected in a private park along Interstate 65.

The monument, offensive to many, drew criticism, but Mr. Kershaw did not shy from offending.

“Somebody needs to say a good word for slavery,’’ he once told The Times-Picayune of New Orleans.

Mr. Kershaw’s principal brush with history came in representing Ray in 1977 in the killing of King in Memphis in 1968. On the advice of another lawyer, Percy Foreman, Ray had pleaded guilty in a Tennessee state court to being King’s sole murderer. If he had been convicted at trial, he would have received an automatic death sentence. Instead, he was sentenced to 99 years in prison.

Ray, a career petty criminal, soon argued that he had been coerced into pleading guilty. Without specifics, he blamed a man he identified only as Raul, whom he said he had met in Montreal. Ray denied shooting King but said murkily that he might have been “partially responsible without knowing it.’’

Mr. Kershaw pushed this vague conspiracy claim. He accompanied Ray to interviews with investigators from the House of Representatives Select Committee on Assassinations, which was looking again at the killings of King and President John F. Kennedy. Mr. Kershaw persuaded the committee to conduct further ballistics tests on the rifle and the bullet that killed King. The tests were said to be inconclusive.

Mr. Kershaw told the panel in May 1977 that on the day of King’s killing, April 4, 1968, Ray was working for Raul, and that Raul had told him to go out to a movie that afternoon. (King was shot shortly after 6 p.m. as he stood on the balcony of the Lorraine Motel.) Instead, he said, Ray went to have a spare tire fixed. The lawyer could not produce a witness.

An article in The New York Times the next month repeated Mr. Kershaw’s contention that Ray was guilty only of having “bought a gun for what he thought was a gun-smuggling operation.’’

In June 1977, Ray and five other inmates escaped from a Tennessee high-security penitentiary, only to be caught a few days later. Mr. Kershaw argued that the escape required help from outsiders and that this was further evidence of a conspiracy.

But Ray grew disenchanted with Mr. Kershaw after he persuaded Ray to be interviewed by magazine and submit to a lie-detector test for the article. The results indicated that Ray was lying when he said he did not kill King and that he was telling the truth when he denied he was part of a conspiracy. Playboy said the results proved “that Ray did, in fact, kill Martin Luther King Jr. and that he did so alone.’’

The last straw came when Ray learned that Mr. Kershaw had accepted $11,000 from Playboy. He fired Mr. Kershaw and replaced him with Mark Lane, a lawyer, author, and conspiracy theorist.