Esther Earl, 16; built an online following of friends as she battled thyroid cancer 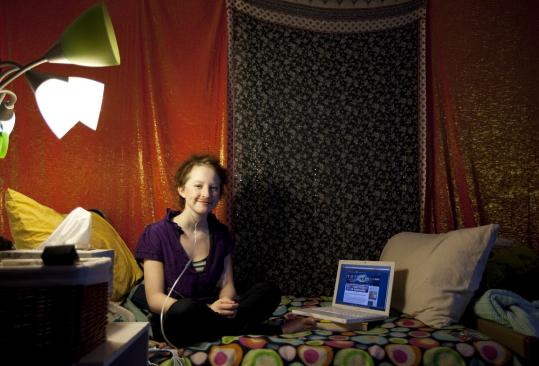 A few days after turning 16 and a couple of weeks before she died, Esther Earl switched on the camera for her online YouTube video journal and set aside for a few moments the playful demeanor that defined her other entries. With insight beyond her years, she mused about how difficult it is to separate the twined strands of identity and illness.

“I sometimes wish I’d never gone through this,’’ she said Aug. 8, looking straight into the camera, “and then I realize that if that happened, I wouldn’t be who I am, and then I get all, like, ‘Oh, that’s just confusing.’ But then sometimes I do wish it never happened, the cancer thing.’’

Tethered by tubes to oxygen tanks that helped her breathe, Esther spoke to the world from her bedroom in Quincy. A vibrant member of online communities, including fan collectives for the Harry Potter books, she formed lasting friendships with people hundreds of miles away, charming thousands with her dimpled smile and cheery, loving presence.

Diagnosed with thyroid cancer four years ago, she endured surgery, chemotherapy, and medications as she balanced the demands of a terminal illness with a teenager’s desire for fun. Esther died Wednesday in Children’s Hospital, where she had been admitted a few hours earlier.

“She would have said herself that she lived a very full life, she didn’t waste any time,’’ said her father, Wayne. “She had a sense of what was important. Esther is in everyone’s heart, she’s absolutely here, and will pull us all forward.’’

Earlier this summer, she became a celebrity in her niche of the Internet when John Green, an award-winning author of young adult fiction, posted a YouTube video encouraging people to vote “with Esther’’ in a contest. The prize was a $250,000 grant, and the outpouring for Esther garnered so many votes that the award went to the Harry Potter Alliance, a nonprofit founded in Somerville that promotes human rights, literacy, and disaster relief efforts.

That drew the attention of J.K. Rowling, author of the Harry Potter series, who sent a hand-drawn picture of a magical Sorting Hat and wrote underneath: “To Esther, with love and best wishes always — Jo.’’

In recent weeks, particularly after posting YouTube videos filled with quirky humor, Esther developed her own devoted following. When her parents took her to the hospital Tuesday, word went out on the Internet and a chorus of YouTube voices responded, first hoping she would dodge death, then mourning the abrupt absence of a friend.

“I’ve never met Esther, but I feel like I know her,’’ one young woman said on YouTube Tuesday.

“I watch her blogs and Esther is just such a wonderful, wonderful person. When I found out that Esther could die tonight, I cried. And it’s not easy for me to talk about some of this, because I don’t cry often. . . . I love you Esther and I feel more comfortable saying that to you than a lot of people that I know.’’

Even people for whom online friendships are as strong as those in real life saw something remarkable in the intense response to Esther.

“This is the first time that I’ve witnessed that kind of grief, where your best friend, someone you love very much, is taken away from you on the Internet,’’ said Green, who lives in Indianapolis and had only met Esther in person twice. “And I learned it is just as powerful as when I lost a friend and classmate in high school.’’

Although the Internet vastly expanded Esther’s reach and relationships, she saw a lot of the world before cancer turned home and bedroom into her principal domains.

Her family’s travels had led her to learn Arabic phrases and become fairly fluent in French before entering her teens.

Born in Beverly, Esther Grace Earl was the third of five children, the bridge between two older sisters and two younger brothers.

“She was talking at 1 and just very precocious and very ahead of things,’’ said her father, who is a minister and chaplain. “She was very verbal, speaking full sentences at 18 months and speaking well at 2.’’

When Esther was 4, his ministry brought the family to the Middle East, where the Earls lived on a Saudi military base. He became an interim minister when they returned to the United States, and the family moved as he served churches in Kingston, Medway, Plymouth, and Williamstown.

Then the Earls moved to France, where Esther was diagnosed with thyroid cancer in 2006.

Back in Boston, doctors at Children’s Hospital found the cancer had spread. When health allowed, Esther attended school in Quincy. Because she spent most of her hours at home, she focused much of her attention on her sisters, Abby and Evangeline, and her brothers, Graham and Abraham.

In a caringbridge.org journal, Esther’s mother, Lori, and her father chronicled the family’s life. Now and then, Esther added entries of her own.

“Yesterday, Abe, Graham and I squirted out the contents of an entire shaving cream can and played with it,’’ she wrote last year. “It may sound boring but it was awesome. Seriously, squeezing a handful of shaving cream is AMAZING.’’

And she invoked an iconic phrase from the online “nerdfighter’’ community on June 12 when she signed an entry, “don’t forget to be awesome — love, Esther.’’

In addition to her parents and siblings, Esther leaves her grandparents, Wayne and Penny (Larrett) Earl of Hot Springs, S.D., and Ken and Peggy (Hall) Krake of San Antonio.

A memorial service will be held at 1 p.m. today in Medway Village Church in Medway. Burial will be in Oakland Cemetery in Medway.

Andrew Slack, cofounder of the Harry Potter Alliance, credited the thousands who voted online because of Esther with securing the $250,000 grant for the organization.

“She has been a beacon of hope for so many people,’’ he said. “It’s not simply because she was sick and struggling with cancer. It’s because she’s so utterly human and so utterly graceful.’’

A realist amid the praise, Esther used part of her YouTube video on Aug. 8 to caution her friends.

Maybe so, but friends had no trouble looking past the illness that may, in Esther’s mind, have magnified minor flaws.

Katie Twyman of Minneapolis, who was part of an online group of friends that included Esther, said it did not go unnoticed that the name Esther means star.

“One thing that drew everyone to Esther more than everything else, more even than her hilariously adorable qualities, was that she loved so purely,’’ Twyman said. “We talk about her shining on even though she’s no longer with us. She loved so deeply and genuinely. That really was her light and what gave her that hopeful, beautiful quality. As long as she has people who knew her as she was and who remember her, her love will always live on.’’