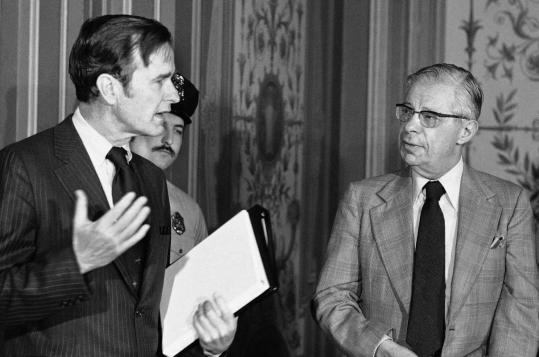 CIA Director George Bush exchanged words in Washington with Daniel Schorr in 1976, when he was a broadcast reporter at CBS. (Henry Griffin/Associated Press)
By Patricia Sullivan Washington Post / July 24, 2010

WASHINGTON — Daniel Schorr — a combative broadcast reporter who over six decades broke major national stories while also provoking presidents, foreign leaders, the KGB, CIA, and his bosses at both and CNN — died Friday morning at Georgetown University Hospital. He was 93. No specific cause of death was reported.

Mr. Schorr, a senior news analyst with National Public Radio for the past 25 years, was one of only a handful of reporters with firsthand knowledge of newsmakers from the 1950s through the 2000s.

Recruited to CBS by the legendary Edward Murrow in 1953, he had the first televised interview with Premier Nikita Khrushchev of the Soviet Union and won three Emmy Awards for his coverage of the Watergate scandal.

In 1977, The Washington Post’s Bob Woodward called him “certainly one of the finest broadcast journalists, and . . . one of the toughest reporters in the business.’’

Mr. Schorr was as fearless in exposing government misdeeds as he was in taking on his employers, including CBS board chairman William Paley and CNN founder Ted Turner.

“It must mean something that, unable to accept the dictates of my bosses, I ended up in confrontations with Bill Paley after a quarter century at CBS and with Ted Turner after six years with CNN,’’ he wrote in his memoir, “Staying Tuned’’ (2001). “It may be that I am just hard to get along with, but to me it always seemed that some principle was involved.’’

President Nixon ordered the FBI to investigate him, but viewers liked his challenges to the powerful.

Mr. Schorr’s outsider status was confirmed in 1973, as he read Nixon’s enemies list during a live broadcast from the Senate Watergate hearings. Reading through the top 20 names, he came to his own name at number 17, with a notation, “a real media enemy.’’

“I managed not to gasp,’’ he later wrote. “I broke into a big sweat. This was the most electrifying moment in my career.’’

But, in his own judgment, it was not the most important. That came in 1975, when he had a scoop on the CBS Evening News that said the CIA, under several administrations, had tried to assassinate Fidel Castro and other Third World leaders. That report set off a Senate investigation that concluded the CIA had not actually killed anyone, “albeit not for want of trying,’’ Mr. Schorr said.

While reporting on FBI and CIA scandals in 1976, he alone acquired a secret investigative report by the House Permanent Select Committee on Intelligence. Leaks from the report were making headlines, but when CBS would not agree to publish the full document, as it had done in other instances, Mr. Schorr gave it to The Village Voice newspaper.

The national press did not hail him as a hero, which surprised Mr. Schorr. That ambivalence stemmed from reports that he accepted money for the leak and that he allowed others to falsely believe that reporter Lesley Stahl had taken the report from his desk and given it to the paper.

The House Ethics Committee, seeking his source, threatened him with contempt of Congress, and CBS suspended him. In public testimony, Mr. Schorr mounted an eloquent defense. “To betray a source would be to betray myself, my career, and my life,’’ he declared. “I cannot do it.’’

The House panel voted not to prosecute, but Mr. Schorr’s subsequent appearance on “60 Minutes’’ did not turn out as well. Under grilling by veteran newsman Mike Wallace, the depth of resentment toward Mr. Schorr at CBS became evident. Some network executives were still fuming over his remarks to Duke University students the previous year that implied that CBS had pressured Walter Cronkite, Eric Sevareid, and Dan Rather to go easy on Nixon the night he announced his resignation, a charge all three denied.

Mr. Schorr resigned, feeling forced out of his job. His book on the incident, “Clearing the Air’’ (1977), did not settle the matter. In a review, Woodward criticized the “arrogant and combative’’ broadcaster for “self-aggrandizement’’ in telling his career’s tales.

He had many to tell, and they brought him such fame that he ended up as a crossword puzzle clue in both The New York Times and The Washington Post. Once a purist about keeping a distance between televised reality and entertainment, he later appeared as himself in several movies.

Scott Simon, host of “Weekend Edition Saturday,’’ worked with Mr. Schorr as recently as his last on-air commentary July 10 and considered him a father figure.

“What other person was personally acquainted with both Richard Nixon and Frank Zappa? Dan was around for both the Russian Revolution and the Digital Revolution,’’ Simon wrote in a eulogy on the NPR website. “I am just glad that, after being known for so many years as a tough and uncompromising journalist, NPR listeners also got to know the Dan Schorr that was playful, funny, and kind. In a business that’s known for burning out people, Dan Schorr shined for nearly a century.’’

Daniel Louis Schorr was born to poor Jewish immigrants in New York. His first news story came at the age of 12 when he learned that a woman had jumped or fallen from his family’s apartment building in the Bronx. He called the police, then sold the news tip to a local newspaper for $5.

He served in US Army intelligence during World War II, based in the United States, but at war’s end headed to Europe to become a foreign correspondent.

His dream of working for The New York Times was quashed when Murrow called him about joining CBS. Mr. Schorr first checked with Times managing editor Turner Catledge, who turned him away. Mr. Schorr said he learned years later that Catledge had ordered a freeze on hiring any more Jewish reporters.

The last of the active reporters who had worked with Murrow, Mr. Schorr was often more like a print reporter than a television personality. He considered makeup silly, hated waiting for camera angles, and did not seek to ingratiate himself with sources.

He learned to use a camera and reopened the CBS Moscow bureau, where he had the Khrushchev scoop in 1957. His defiance of censorship landed him in hot water with the KGB, and by the end of the year, he was expelled from the country.

He became a roving diplomatic correspondent and provoked the ire of President Eisenhower in 1959 by reporting the impending resignation of Secretary of State John Foster Dulles.

President John F. Kennedy was no more congenial; he asked CBS to transfer Mr. Schorr from his West German post because Kennedy thought his reports were too pro-German. In 1962, East German leader Walter Ulbricht became so incensed during a Schorr interview that he yelled and stalked off the set.

Amid the 1964 presidential campaign, Mr. Schorr enraged Republican nominee Barry Goldwater when he reported that Goldwater had formed an alliance with some right-wing Germans and planned to spend time at one of Adolf Hitler’s retreats.

Mr. Schorr married for the first time at the age of 50 to Lisbeth Bamberger. Besides his wife, of Washington, he leaves two children, Jonathan Schorr of Oakland, Calif., and Lisa Schorr of Boston; a brother, Alvin Schorr of Charlotte; and one granddaughter.

After leaving CBS in 1976, Mr. Schorr spent three years lecturing, writing, and teaching, until he was asked by Turner to join the nascent all-news cable television network, CNN, as its first news anchor.

His relationship with Turner started out so well that the billionaire entrepreneur, upon learning that cable television was unavailable in Washington in 1980, sent a satellite dish to be installed in the front yard of Mr. Schorr’s Woodley Park home.

Promised editorial freedom for his commentaries, Mr. Schorr appeared less and less often on the network, particularly after he publicly objected to Turner’s editorial calling for a crackdown on violent movies. CNN did not renew his contract in 1985, and Mr. Schorr then penned an attack on Turner’s ethics for the Los Angeles Times opinion pages. Turner replied in kind. A CNN workman unsuccessfully attempted to reclaim the satellite dish.

In contrast, his 25 years at NPR went far more smoothly. As a commentator there, his deep experience covering the world gave him the gravitas to offer opinions on everything from the Supreme Court’s decision in the 2000 presidential race (“A judicial coup’’ by “the Gang of Five, philosophically led by archconservative Antonin Scalia’’) to placing the first decade of the 2000s in historical context.

In addition to the 1972, 1973, and 1974 Emmys, he received multiple journalism awards, including the 1996 Alfred I. duPont-Columbia University Gold Baton for his lifetime work. In 2002, he was elected to the American Academy of Arts and Sciences.