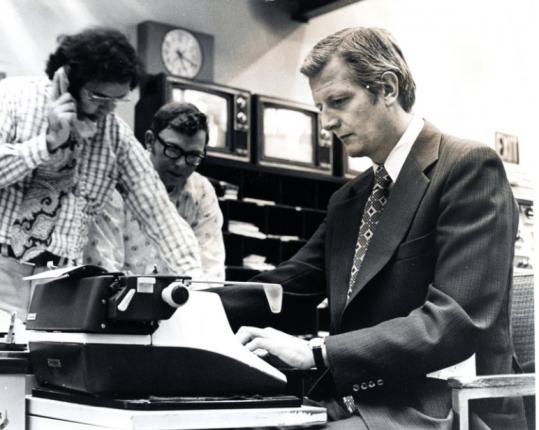 Bringing street smarts to TV anchor desks and an anchorman’s poise to reporting on the streets, John Henning was a stately presence in Boston broadcasting for more than four decades.

Mr. Henning, who won many awards for his work and was a member of the Massachusetts Broadcasters Hall of Fame, died late Wednesday at Massachusetts General Hospital in Boston, a few months after being diagnosed with myelodysplastic syndrome, a precursor to leukemia. He was 73 and lived in Boston.

Anchoring the news on channels 4, 5, and 7 for a total of 25 years, he was a no-nonsense Walter Cronkite figure for Boston viewers during a period when TV news became increasingly glitzy, a trend he abhorred.

“Some people think I’m boring, that I don’t smile enough,’’ Mr. Henning, who was known for his straightforward delivery, told the Globe in 1981. “But my philosophy is that anything that takes away from the job of presenting the news, that is distractive to the viewer, is bad. I’m talking about things like hairstyle and clothes and mannerisms.’’

Raymond L. Flynn, a former mayor of Boston, described Mr. Henning as “an institution . . . in the city of Boston.’’

“Nobody was more courageous and effective and a person of integrity than John Henning,’’ Flynn said. “This is a giant loss for the city. He was one of the greatest street reporters this city has ever had.’’

Michael S. Dukakis recalled that when he was governor, politicians took note if Mr. Henning was among a crowd of reporters, and he was easy to spot.

“When Henning was at a press conference, you were aware of it,’’ Dukakis said. “He was a presence, he asked serious questions, and you had better be ready for him. And then he’d be on the 6 o’clock news.’’

With lengthy experience informing his reporting, Mr. Henning was known as a formidable interviewer. Also, by virtue of his physique alone, he towered over the competition and his on-air colleagues. At 6-feet-5, he delivered the news from chairs that were adjusted lower to mitigate the height difference between him and others at the anchor desk.

“I think a lot of people looked up to John because they recognized he knew what he was talking about,’’ said Jack Hynes, a co-anchor with Mr. Henning at Channel 5. “There were two things in the television news business that are indispensable. You have to have likability and credibility, and he had both. People liked him and politicians liked him, even though he asked tough questions.’’

Hynes added with a chuckle that because of his height, Mr. Henning “had this presence of, ‘Don’t mess with me, I know what I’m talking about.’ And he had a great, wry sense of humor. He left his mark on the city.’’

Mr. Henning’s tenure stretched from the days when only a few channels were available, through the proliferation of cable programming and into the Internet age. In his years as an anchor, TV station owners began to rely more heavily on consultants as news became another piece of programming to sell.

When WBZ for a time let consultants hold sway, Mr. Henning told the Globe in 1998, “We stopped treating viewers like citizens and started treating them as consumers to be satisfied.’’

Instead, he took inspiration from broadcasters such as Cronkite, John Chancellor, and Charles Kuralt. Globe critic Robert A. McLean wrote in 1981 that Mr. Henning was “one of the best street reporters in the history of Boston TV news.’’

Mr. Henning, meanwhile, insisted that news delivered on the air could be only part of the picture.

“Television has come a long way in concept and integrity, but the best we can do, given the limit of time, is an extended headline service,’’ he said in 1977 during a graduation address at Fitchburg State College. “That service should be complemented by the daily newspaper and weekly news magazines of your choice.’’

Born in New York City, Mr. Henning was the oldest of six brothers and grew up in the boroughs of Brooklyn and Queens. His father, Walter, was a city police detective and assistant chief inspector in charge of detectives.

“My mother said that when he [John] was little, he would get on the floor and lean his head right up against one of the radio speakers,’’ said Mr. Henning’s brother Peter of Keyport, N.J. “He spent all his time listening to the radio. He loved that stuff.’’

Mr. Henning worked part-time for newspapers in New Jersey and the New York City suburbs on Long Island while he attended St. Peter’s College in Jersey City, N.J., from which he graduated.

He moved north to get a master’s at Boston University, where, through mutual friends, he met Betsy Cohen, an undergraduate. They married in 1969. She died in April 2008.

While completing his graduate degree, Mr. Henning started working as an intern at WGBH-TV, Channel 2. In 1964, he took a reporting job at what was then WNAC-TV, Channel 7, and became an anchor two years later.

In 1968, he left for WHDH-TV, Channel 5, where he was the anchor for the last news broadcast under those call letters and for the first when the station became WCVB. Eleven years later, he jumped back to Channel 7 (now WHDH), where he stayed until resigning in 1981, when his duties were diminished as station management tried to address low ratings.

Mr. Henning completed the cycle of Boston TV news anchoring when he joined WBZ-TV, Channel 4, in January 1982, and he remained at the station as senior correspondent until 2003. In 1995, he received the Governor’s Award for excellence in news reporting at the annual New England Emmy Awards ceremony.

Five years ago, he joined Denterlein Worldwide public affairs in Boston as a senior adviser, consulting with clients on public policy, media relations, and crisis management.

“Most people knew John as a distinguished newsman and commentator who loved Boston and who loved politics,’’ Geri Denterlein, the firm’s president, said in a statement. “But to those of us who knew him more personally, he was a very big man — gentle, sweet, and loyal to his family and friends. He was a mentor to me when I was editorial director at WBZ, and many years after he left WBZ, it was an honor that he joined my company as senior adviser. He will be missed by those of us who had the great pleasure of working with him day to day.’’

In addition to his brother Peter, Mr. Henning leaves two sons, Matthew of Winchester and Gregory of Boston; four other brothers, James of New York City, Michael of Charleston, S.C., Daniel of Jacksonville, Fla., and Paul of Glen Cove, N.Y.; and three grandchildren.

“He was truly an icon,’’ said Ron Della Chiesa, a longtime friend and a radio personality on WGBH. “We’ll never see the likes of his kind of reporting again. There was a sense that when people watched John Henning say something on television, they believed him.’’

Dukakis said Mr. Henning “was a real street guy, and yet at the same time, very smart, very sophisticated, a guy who was a journalist with a capital ‘J.’ Sadly, we have very few of them left on television.’’