Walter Shorenstein, billionaire titan in real estate and philanthropy; at 95 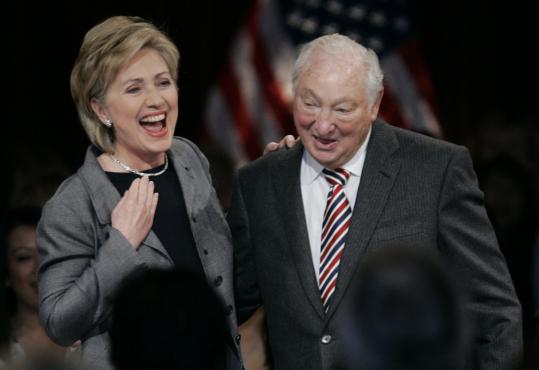 SAN FRANCISCO — Walter Shorenstein, founder of a closely held real estate company that at various times has owned the skyscraper in San Francisco, the John Hancock Center in Chicago, and the Washington Harbour complex in the US capital, died Thursday at the age of 95.

Mr. Shorenstein died of natural causes at his home, Shorenstein Co. said Friday in a statement.

Under Mr. Shorenstein’s leadership from 1960 to 1995, the company that now bears his name expanded from a regional building, leasing, and management corporation in San Francisco to a leading owner and operator of office buildings nationwide.

Forbes magazine estimated the net worth of Mr. Shorenstein and his family to be $1 billion in March 2009.

“I started out with $1,000 and used to think that if anyone could ever earn a million dollars, that’s all you could want,’’ Mr. Shorenstein said, according to a 1985 story in the Times. “But it’s like peddling a bike: Once you get going, it’s hard to stop.’’

His simple investing style enabled his firm to weather economic declines that threatened other real estate companies. In a contribution to an oral history project at the University of California at Berkeley, in 2009, he said:

“Just because a new investment fad sweeps through certain crowds, that doesn’t necessarily mean it’s a smart place to put your money. If terms like counterparty risk, mark-to-market accounting, and capital-structure arbitrage aren’t part of your everyday conversation, then don’t risk your future on something you don’t understand.’’

A major promoter of the Democratic Party, Mr. Shorenstein advised Presidents Johnson and Carter and played a central role in bringing the 1984 Democratic National Convention to San Francisco.

He also joined the group of investors that accumulated $100 million to buy Major League Baseball’s in 1992, keeping the franchise from being sold and moved to St. Petersburg, Fla.

With his wife, Mr. Shorenstein founded the Joan Shorenstein Center on the Press, Politics, and Public Policy at Harvard University’s Kennedy School of Government.

They did so in honor of their daughter, Joan, a journalist at the Washington Post and CBS News, who died in 1985 after a 10-year battle with cancer.

Walter Herbert Shorenstein was born in Glen Cove, N.Y., the son of a haberdasher. He attended the University of Pennsylvania before cutting short his undergraduate studies to fight in World War II as a major in the US Army Air Corps.

After the war, Mr. Shorenstein settled in California.

Mr. Shorenstein began work in commercial real estate in 1946 with the brokerage firm Milton Meyer & Co. He became a partner in 1951 and, in 1960, bought the company and became its president. He kept the name until 1989, when it became Shorenstein Co.

In addition to his son, Mr. Shorenstein leaves a daughter, Carole Shorenstein Hays, and several grandchildren.