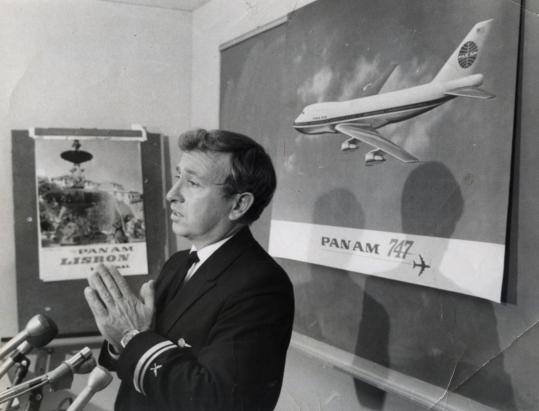 About 16 hours into a hijacking that made world news in September 1970, in-flight director John Ferruggio knew he would have little time to evacuate the passengers on Pan American World Airways Flight 93 once the jet landed.

Two hijackers armed with handguns and grenades had taken control of the 747 jumbo jet, which was supposed to fly from Amsterdam to New York City. They diverted it to Beirut, where a third hijacker boarded with dynamite. Then, the plane headed to Egypt.

“The fuse was lit as we began our descent into Cairo,’’ Mr. Ferruggio said a couple of days later during a press conference at Pan Am’s Boston office. “I could smell it, and some of the crew and passengers said they could, too.’’

As the plane began to land, Mr. Ferruggio recalled for an “American Experience’’ television documentary in 2006, he told “all the attendants, ‘Now hear this and hear it good. When this plane comes to a complete stop . . . don’t wait for me, don’t wait for the captain, and don’t wait for Jesus Christ. We are going to evacuate this plane, like right now.’ ’’

Passengers slid quickly down the escape slides, and the last of the crew followed, barely getting past the tips of the wings when the jet exploded. Mr. Ferruggio, who was credited with saving about 170 lives by directing the orderly evacuation, died Saturday in Milton Hospital of organ failure, shortly after undergoing medical tests. He was 84 and had lived in Milton.

Unimposing physically, Mr. Ferruggio was 5 feet 4 inches tall, but “he handled emergencies well,’’ said his daughter JoAnn Kerzel of Westwood. “He liked to be in the center. He was a small man with a big personality.’’

Mr. Ferruggio had been with Pan Am for 16 years on Labor Day weekend 1970 and knew that in the age of hijackings, when several planes had been taken to Cuba, he might someday find himself facing passengers holding weapons.

“John often talked about the possibility of being hijacked, but always flippantly,’’ his wife, Susan, told the Globe in September 1970, days after Flight 93 was commandeered. “He would say, ‘Oh, well, I’ll go down to Cuba to get my cigars.’ ’’

The 747 he was assigned to was the fourth New York-bound jet hijacked on Sept. 6, 1970, by the Popular Front for the Liberation of Palestine. The coordinated effort by the organization, which opposed US policy in the Middle East, turned the day’s events into international news.

The first two hijackers who boarded Mr. Ferruggio’s flight had been kicked off another plane, and the Pan Am pilot did not find their weapons when he patted them down before departing. When the hijackers took control, Mr. Ferruggio said, the more than 150 passengers stayed remarkably calm.

“At no time was there any panic,’’ he said in the 1970 news conference. “We tried to make them feel relaxed. We joked and kidded and told them we wouldn’t charge them for the extra fare to Beirut.’’

Mr. Ferruggio asked the hijackers what would happen, and they responded that the jet would explode eight minutes after it landed in Cairo. After telling the crew, he explained the urgency of the situation to the passengers. Once the passengers and cabin crew were out, he, too, slid down the exit slide. Everyone had escaped in less than a minute and a half.

When Mr. Ferruggio went into the terminal, “everybody stood up and gave me a fantastic ovation,’’ he told the Globe in 2006, just before the “American Experience’’ documentary aired. “Somebody gave me a cigar, somebody gave me a bottle of beer. I have never been so elated.’’

John Joseph Ferruggio was born in Boston’s North End, the youngest of three children. His parents were immigrants from Sicily and moved to South Boston, where he started school at an early age to add another child fluent in English to the household, his daughter said.

As a result, he was younger than others in his South Boston High School graduating class. World War II had started, and Mr. Ferruggio forged his father’s signature to join the US Navy.

Aspiring at the time to become a doctor, he trained as a pharmacist and was assigned to a Marine unit, taking part in battles at Guadalcanal and Iwo Jima.

After the war, he returned to South Boston, where he worked in shipyards and opened a couple of small restaurants before taking a job with Pan Am.

In 1961, he married Susan Wilson, to whom he was introduced by mutual friends. She had grown up in Newton and was a ballet dancer in New York City, where they became a couple before marrying and moving to South Boston.

She ran a dance studio in Boston, and Mr. Ferruggio, through his work, met a stream of dignitaries and celebrities who flew international flights.

“Between the two of them, you can’t go anywhere without meeting someone who knew them,’’ their daughter said. “He met lots of presidents; he met lots of stars. It was a perfect job for him. He loved to travel, and he loved to socialize.’’

The family moved to Milton in the early 1970s, and Mr. Ferruggio retired from Pan Am about a dozen years later. He ran a real estate office in South Boston and in recent years was a full-time caregiver for his sister, Josephine of Milton.

“He was that kind of person who loved to do things for others,’’ his daughter said. “He couldn’t do enough for people.’’

Still, he didn’t mind stepping into the spotlight himself, and he was an enthusiastic participant during karaoke nights at local establishments.

“He was a big Frank Sinatra person,’’ his daughter said, adding that his favorite Sinatra song was “My Way.’’

In addition to his wife, daughter, and sister, Mr. Ferruggio leaves two other daughters, Lisa DeLuca of Milton and Donna Lee York of North Andover; and six grandchildren.

A memorial service will be held at 10 a.m. tomorrow in Dolan Funeral Home in Milton. Burial will be in Blue Hill Cemetery in Braintree.