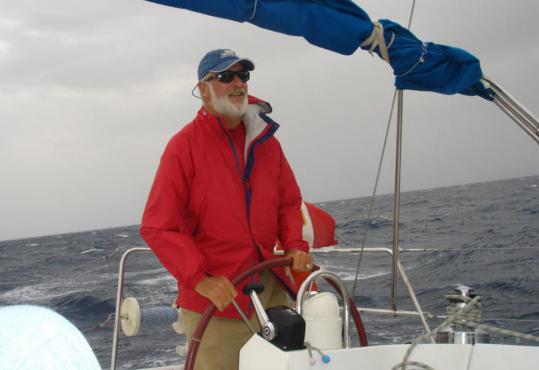 Sometimes it seemed as though K. Dun Gifford stepped into the stream of history and spent the rest of his life racing in its swift current.

At 17, he survived the sinking of the Andrea Doria with his family in 1956. At 29, he was steps away when Robert F. Kennedy was shot in Los Angeles in 1968 and helped subdue the assassin.

Mr. Gifford also was an investment banker, a real estate developer, a restaurant owner, a friend who fetched McDonald’s fries when Julia Child had a fast food craving, and for the past 20 years a driving force in the movement to promote the health benefits and culinary appeal of the Mediterranean diet.

“In many ways, he was a bit of a mystery because he had so darn many interests,’’ said his younger brother, Chad, chairman emeritus of . “He was just insatiably curious, almost to the point where he’d go from subject to subject, but he had the capability to understand those subjects surely better than most.’’

Mr. Gifford, who founded Oldways Preservation Trust in 1988 to promote healthier eating, died of a heart attack Sunday in Exeter, N.H., after returning from a trip to France and Australia. He was 71 and lived in Cambridge.

Among his many business ventures was Kilvert & Forbes, a cookie and muffin shop he started in Quincy Market in 1976 with US Senator John F. Kerry. They christened their business after their mothers’ maiden names.

“Dun was an extraordinary friend, and we had a hell of a lot of fun as young business partners,’’ Kerry said in a statement. “We loved to look back at how little we knew when we started out. All we were sure of was that we shared a sweet tooth, and one day we stopped talking about the scarcity of great cookies in Boston and just decided to make a go of it ourselves. . . . I just can’t tell you how much I’ll miss him, but also how much I smile about the journey we took together as young guys with a lot to learn. He made it fun.’’

The journey from satisfying the sugar cravings of tourists to challenging the accepted nutritional requirements of the food pyramid a dozen years later took Mr. Gifford through a variety of business ventures. Among other positions, he co-owned the Harvest and other restaurants in Greater Boston and served as chief executive of

But long before Globe food critic Alison Arnett dubbed Mr. Gifford the “guru of a new way of eating’’ in May 2000, he had entered the public arena through the more conventional route of politics.

Growing up in Rhode Island, Kilvert Dun Gifford was 10 when he watched his father get pelted with tomatoes while campaigning for the City Council in Providence.

“From that moment, I’ve been fascinated by politics and the emotions it engenders,’’ he told the Globe in 1978.

After a year with the US Department of Housing and Urban Development, Mr. Gifford became a legislative assistant to US Senator Edward M. Kennedy, before joining Robert Kennedy’s presidential bid as a national campaign coordinator.

Mr. Gifford was walking behind Robert Kennedy in a Los Angeles hotel when Sirhan Sirhan began shooting. He was among those who tackled Sirhan, telling the Providence Journal in 1998 that “people were piling on, hitting him, berating him. . . . I went to law school and wanted to have him alive and not dead.’’

The following summer, Mr. Gifford was at his family’s summer home on Nantucket when he was called to Martha’s Vineyard to assist the Kennedys after Edward Kennedy drove his car off a bridge at Chappaquiddick. A passenger, Mary Jo Kopechne, died in the accident, and Mr. Gifford escorted her body to her family’s home in Pennsylvania.

Leaving politics in 1970, Mr. Gifford worked on major development projects for several years at Cabot, Cabot & Forbes, a real estate company in Boston, then went off to forge his own business deals.

For many years, he was a trustee of Cambridge College and in 1984 began serving on boards of culinary concerns such as the American Institute of Wine & Food and the James Beard Foundation.

In 1960, he married Gladys C. Porter. Their marriage ended in divorce last year.

Mr. Gifford contributed book reviews and opinion pieces to the Globe for many years, and his path from Capitol Hill to the kitchen can be traced in his subjects, which shifted from political biographies to cooking, recipes, and how to put together a starter wine cellar.

“The most overarching thing for me about dad was his commitment to public service, which was so much a part of him that it was inseparable from his daily life and who he was,’’ said his son Dun Jr. of Portland, Ore. “He was also a master of the small, kind gesture.’’

A much more significant gesture came when Mr. Gifford, in a symbolic sense, helped transform public opinion about food.

“In the nutrition field, we had been very concerned that the benefits of a Mediterranean kind of diet were being overlooked by the mainstream,’’ said Dr. Frank Sacks, a professor of nutrition at the Harvard School of Public Health. “It turned out that Dun was a godsend to us. He got his inspiration independently of us that Mediterranean diets are healthy and that we should marry the culinary arts, health, and culture.’’

In 2000, Arnett wrote in the Globe about Mr. Gifford’s efforts with Oldways, saying he was changing Boston’s dining scene one restaurant at a time. Organizing symposiums in places such as Greece, Turkey, and Hawaii, he did the same thing on an international scale, mixing participants as if he were a chef concocting a dinner that would change taste buds.

“Dun was a pioneer in bringing people together, including nutrition scientists, culinary experts, and food writers to translate what we were learning about diet and health into practice, and that’s had a transforming effect on how Americans eat,’’ said Walter Willett, chairman of the nutrition department at the Harvard School of Public Health.

Sara Baer-Sinnott, the executive vice president of Oldways who was Mr. Gifford’s companion, said he was “a great teacher, and he taught people a lot about food and healthy eating and pleasure at the table.’’

“He loved food,’’ she said. “He loved eating it, talking about it, writing about it, and cooking it. He took very complicated scientific information and made it understandable for everyone, inspiring them to enjoy great traditional healthy foods and wine.’’

In addition to his son, brother, and Baer-Sinnott, Mr. Gifford leaves two other sons, Porter of Cambridge and Clarence of New York City; a daughter, Caroline of Newfane, Vt., who is known as Apple; another brother, John of Brookline; a sister, Priscilla Mleczko of Nantucket; and five grandchildren.

A memorial service will be held at 10 a.m. Friday in St. John’s Memorial Chapel at the Episcopal Divinity School in Cambridge.