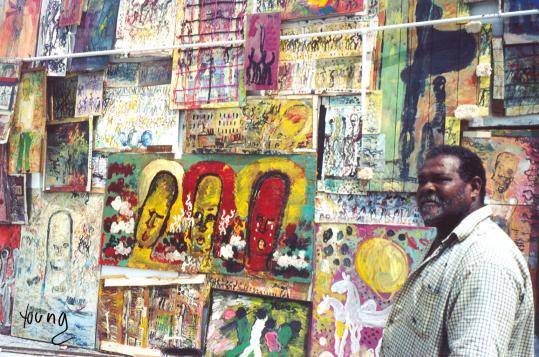 Purvis Young, one of South Florida’s most storied artists, with one of his murals in Fort Lauderdale in 2003. (Larry T. Clemons/Gallery 721)
By Bruce Weber New York Times / April 25, 2010

NEW YORK — Purvis Young, a self-taught painter who emerged from prison as a young man and by dint of his striking, expressionist vision of urban life and mammoth output over more than three decades transformed a forgotten Miami neighborhood into a destination for contemporary art aficionados, died Tuesday in Miami. He was 67.

The cause was cardiac arrest and pulmonary edema, said Dindy Yokel, a friend. Mr. Young had diabetes and several other health problems in recent years, including a kidney transplant in 2007.

Mr. Young, who never attended high school, was often called an outsider artist or a street artist, and he lived a life that only intermittently surfaced on the art-world grid. But he was influenced by a number of artists — including Rembrandt, El Greco, van Gogh, and Delacroix — whose works he pored over in art books in the public library.

“His great ability was to twin urban contemporary culture with high-art motifs,’’ said Brooke Davis Anderson, a curator at the American Folk Art Museum in Manhattan. The museum has 20 of Mr. Young’s pieces in its collection, 14 donated by the Rubell Family Collection in Miami, which bought the entire contents of Mr. Young’s studio, as many as 3,000 pieces, in 1999.

His work can also be found in the collections of the Bass Museum in Miami, the Corcoran Gallery in Washington, the High Museum in Atlanta, the Smithsonian American Art Museum, and the Philadelphia Museum of Art.

Painted or drawn in ink on found materials as diverse as cardboard, discarded doors, orange crates, telephone bills, book pages, and manila folders, Mr. Young’s work often concerned itself with cacophonous, urgent representations of urban strife. He lived most of his life in the Overtown section of Miami, a once-thriving community that was ravaged by the construction of an interstate highway through it in the 1960s, and he painted what he saw around him.

His work featured writhing calligraphic lines often denoting crowds of people, frenzied bursts of color, and repeated symbols — a personal iconography that included horses, which, as he explained in interviews, denoted freedom; angels and floating heads, which denoted good people and the possibility of goodness in a strife-riven world; and round blue shapes, sometimes coalescing into eyes that denoted an all-seeing establishment.

He often painted images of trucks, trains, and railroad tracks to suggest possibilities of escape and methods of connection between the inner city and the outer world. Indeed, there is a storytelling aspect to his paintings; they resonate with the consequences of racism, the plight of the underprivileged, the atmosphere of daily violence, the world’s pervasive hypocrisy.

Mr. Young was born in Miami and introduced to drawing by an uncle, but he gave it up at a young age. In his late teens he was convicted of a felony — it has been variously reported as breaking and entering and armed robbery — and spent between two and three years in a Florida prison, where he began drawing again and perusing art books.

When he got out, in the mid-1960s, he was inspired by Vietnam War demonstrations and by the protest art he read about from other cities — notably the Wall of Respect mural in Chicago, painted by members of the Black Arts Movement. In the early 1970s he created a mural of his own, plastering a wall along a deserted stretch of Overtown’s Goodbread Alley with dozens of his works.

The mural drew attention from the news media and from Miami’s art establishment, including an eccentric millionaire, Bernard Davis, who owned the Miami Museum of Modern Art and briefly became Mr. Young’s patron, providing him with painting supplies. (Davis died in 1973.) From then on, Mr. Young grew into something of an urban legend, a local celebrity, a frequent interview subject, and an art-world star.

“He became part of the itinerary for people going to Art Basel,’’ the Miami art fair, Anderson, of the Folk Art Museum, said.