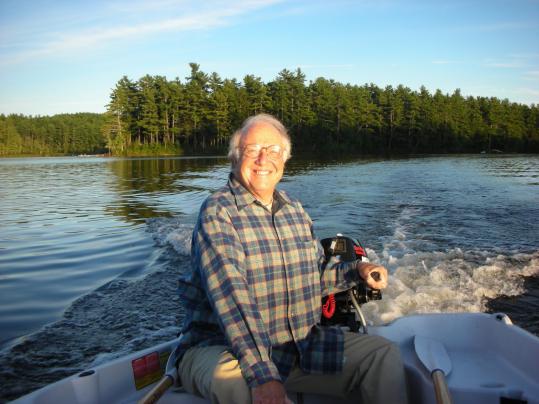 Dennis Wolkoff was director of the Eastern region of The Nature Conservancy.
By Bryan Marquard Globe Staff / April 11, 2010

Dennis Wolkoff spent much of his 35 years with The Nature Conservancy helping shape the organization as he negotiated agreements that preserved land to protect imperiled species or spare pristine slices of wilderness.

His impact went beyond the obvious, however, as he rose to become director of the Eastern region, from New England down the Eastern Seaboard. Colleagues say Mr. Wolkoff contributed just as much through decades of conversations with co-workers who were stymied by problems. He would tease out a course of action, or maybe a few, then inevitably end by saying, “the choice is yours.’’

Mr. Wolkoff, who was particularly involved in protecting as much of Block Island, R.I., as possible, died of cancer March 9 in his Cambridge home. He was 64 and for many years he and his wife had a second home on Block Island.

“He was so effective as a mentor at the same time that he was a friend,’’ said David Lewis, a neighbor on Block Island who formerly was president of the Block Island Conservancy. “You didn’t even know how much you were learning and how much mentoring was taking place as you enjoyed his company in casual settings as well as work situations. He had a very easygoing nature and was extremely patient.’’

Laura Johnson, who is president of Mass. Audubon, was a young lawyer in 1982 when Mr. Wolkoff hired her to work for The Nature Conservancy.

“He had a gift as a mentor,’’ she said. “He was a very, very smart guy, very perceptive, and he really liked to challenge people. That’s partly why he was such a good mentor. He would ask questions and in the end he would say, ‘It’s your decision,’ so you had the benefit of thinking with him, but you still learned to make decisions.’’

Such conversations didn’t all take place in the office, on the phone, or out in a tract of wilderness the conservancy was trying to protect. Mr. Wolkoff was as passionate about the as he was about conservation, and often went to Fenway Park with colleagues.

Between innings, though, the conversation almost always slipped away from the game at hand.

“It was very easy to get into policy discussions, shall we say, about any topic,’’ Lewis said. “He and I were always ready to rise to the argument.’’

Said Mason Morfit, the Conservancy’s former Maine state director: “He was sort of a walking op-ed page himself. You could raise any topic and he had an opinion.’’

Still, Morfit added, “I think there are probably many people in The Nature Conservancy and elsewhere who would consider Dennis among their best friends if not their best friend. He managed to earn that status among a number of people.’’

Mr. Wolkoff was born in Philadelphia and grew up in St. Paul, where his father was a physician.

“I grew up in the city, but my parents took me fishing and sent me to summer camp where I learned what few outdoor skills I have,’’ he told the Block Island Times for an article published in January. “I wish I had grown up on Block Island.’’

Instead, he sold peanuts at the state fair and attended the University of Minnesota, where he graduated with a bachelor’s in accounting. That career choice turned out to be misguided. He worked as an accountant for a few months, but “I decided I was not very good at it,’’ he told the Block Island Times.

He got into Harvard Law School and met Susan Coolidge soon after arriving in 1967. They married in July 1969.

“Dennis would walk into a room and everybody would just light up,’’ she said. “He had such a presence and such a smile and such an acceptance. He made everybody feel good about themselves. Dennis was particularly smart, but he never made you feel like you weren’t smart enough. He always found something to connect with.’’

While at Harvard Law School, from which he graduated in 1971, Mr. Wolkoff took time off to join the Army Reserves during the Vietnam War. Rather than cut off his long red hair, he bought a short red-hair wig. Coolidge tied his hair in a ponytail and tucked it under the wig for his Reserves duty. “It looked a little lumpy,’’ she recalled.

He taught business law at Indiana University for a few years after law school, then became the Conservancy’s first state director.

“It is hard to put into words the fullness of Dennis’s many contributions to the Conservancy,’’ Philip Tabas, vice president and general counsel for the Conservancy, wrote in a tribute posted online. “At one level, during his tenure he started the Conservancy’s first state program in Indiana which became the model for the state programs we know today. He later became the Southeast regional director and then for many years the Eastern region director, where he built, nurtured, and managed some of the organization’s strongest conservation programs and units.’’

When Mr. Wolkoff took the Eastern region job, he and Coolidge settled in Beverly for many years before moving to Cambridge, where he immersed himself in neighborhood issues. Through these years, he left his mark on conservation deals in more than a dozen states, but Block Island remained a personal focus. This year, the Block Island Times presented its annual Bayberry Wreath Award to Mr. Wolkoff for his conservation work.

“The legacy he leaves on Block Island is one of caring, loving the community, a desire to see it succeed, and helping it succeed,’’ Lewis said.

Diagnosed with cancer last year, Mr. Wolkoff wished only to keep conserving parts of the landscape around him for those who would follow.

“Dennis truly left the world a better place than when he went in,’’ Coolidge said. “I’m a teacher, and he and I said how lucky we were to have the best jobs. We loved our work, we didn’t want to retire.’’

In addition to his wife, Mr. Wolkoff leaves a daughter, Katherine of Brooklyn, N.Y.