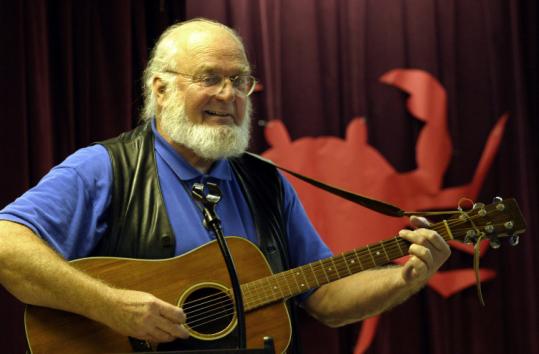 Tom Wisner recorded several albums over the years, including some with the talents of southern Maryland schoolchildren. (James A. Parcell/Washington Post)
By Jenna Johnson Washington Post / April 9, 2010

WASHINGTON — When Tom Wisner sang or wrote about the Chesapeake Bay, a task he dedicated his life to doing, he always tried to capture the voice of the water and the sky, of the rocks and the trees, of the fish and the birds, of the gods of nature he believed still watched over it all.

The Bard of the Chesapeake Bay, whose music was recorded by the Smithsonian Institution and used in a National Geographic documentary, died of lung cancer April 2 at Burnett-Calvert Hospice House in Prince Frederick, Md. He was 79.

Thomas A. Wisner was born in the District of Columbia and was a graduate of Anacostia High School.

Most summers, he and his mother would visit her family’s farm in the upper James River basin in Virginia. They spent hours sitting on the front porch, singing country songs.

Mr. Wisner was an Air Force veteran of the Korean War, and then earned his bachelor’s degree in biology from Hartwick College in New York with the help of the GI Bill.

He did graduate work in ecology at Cornell University, studying the migration patterns of swans and geese, but grew bored.

He worked as a naturalist in Sequoia National Park in California, and then moved to southern Maryland to be a high school science teacher.

In the mid-1960s, he took a job as an educator at the University of Maryland’s Chesapeake Biological Laboratory in Solomons, where he began writing and singing.

Mr. Wisner’s job at the lab was to help the scientists and environmentalists explain their findings and their worries about the health of the watershed.

But he soon found that people related better to art and music.

“It was too cognitive and too tight-lipped,’’ Mr. Wisner said. “They have the revelation, but they can’t relate to the culture.’’

Soon after joining the lab, Mr. Wisner began composing. One of his better-known songs, “Chesapeake Born,’’ was written while he lived in the lab’s dormitory.

Over the years, Mr. Wisner recorded several albums, including one with his son Mark and several with southern Maryland schoolchildren.

Mr. Wisner worked with groups of children who visited the lab and, years later, he decorated his home with their artwork and photos of children pretending to be crabs, gulls, or other bay creatures.

Soon after learning he had lung cancer in late 2008, he and a group of charter school students recorded “The Land, Maryland.’’

Mr. Wisner, who retired from the Chesapeake laboratory in his 50s, lived much of his life in near-poverty in Calvert and St. Mary’s counties, relying on donations from public appearances and on the kindness of the many friends he made through his work.

His only marriage, to Joanne Fortin, ended in divorce.

In addition to his son Mark, of Homer, Alaska, he leaves three other children, Michael of Snowmass, Colo., Kirsten Wisner of Seaside, Calif., and Karen Wisner of Portland, Ore.; and seven grandchildren.

Mr. Wisner also became good friends with Maryland political figures, urging them to pass laws to protect the bay. Anytime he spotted Governor Martin O’Malley at events, Mr. Wisner would make the governor come on stage and sing with him.

“His life’s work and his life’s hope was to bring about a new era in our relationship to the land and the waters of the bay,’’ O’Malley said in a statement.

Mr. Wisner also recorded the oral history of the region, taping interviews with old watermen and documenting the tunes oyster shuckers sang as they worked. His music was used in a 1986 National Geographic documentary about the Chesapeake. In 2000, Mr. Wisner helped found the Center for the Chesapeake Story, or Chestory, in Solomons, which is dedicated to preserving the history of the region and the bay through the arts.

Someone once gave Mr. Wisner a CD of songs about the Mississippi River, which he listened to for a few minutes before turning it off in disgust.

The music was not about the river, he said; it was about the towns and people living along the river.

“Ninety percent of our songs are about us telling ourselves about us, over and over, again and again,’’ he said.

Mr. Wisner’s life goal was to sing, write, and advocate for the lands, skies, and waters that existed before towns and people.