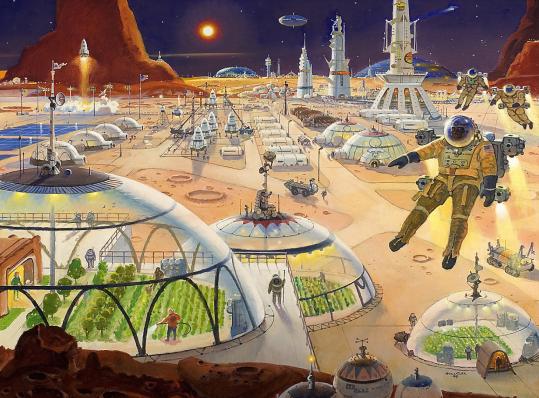 NEW YORK - Robert T. McCall, an artist whose fervor for space exploration found expression in his six-story-tall mural at the National Air and Space Museum and two postage stamps canceled on the Moon, died Feb. 26 in Scottsdale, Ariz. He was 90.

The cause was heart failure, said his wife, Louise.

Mr. McCall eagerly translated his youthful enthusiasm for drawing knights in shining armor on spirited steeds into paintings of intrepid astronauts in gleaming space vehicles, both real and imagined. When NASA in 1962 hit on the idea of enlisting artists to promote its mission, Mr. McCall was one of the first three chosen.

He went on to create hundreds of vivid paintings, from representations of gleaming spaceships to futuristic dream cities where shopping centers float in space. His most famous image may be the gargantuan mural, showing events from the creation of the universe to men walking on the moon, on the south lobby wall of the National Air and Space Museum on the National Mall in Washington. More than 10 million people a year pass it.

Or it might be his painting showing a space vehicle darting from the bay of a wheel-shaped space station, which was used in a poster for Stanley Kubrick’s landmark 1968 film, “2001: A Space Odyssey.’’

Then there are the mission patches he made for astronauts, including one for the last men to walk on the moon; the many paintings that hang in military buildings from the Pentagon to the Air Force Academy; and the enormous mural at the Johnson Space Center in Houston showing the progression of the American space program, from the first Mercury missions to the space shuttle.

He also designed more than a dozen stamps for the US Postal Service, and a set was ceremoniously canceled on the lunar surface by David Scott, commander of the Apollo 15 mission.

H. Lester Cooke, former curator of painting at the National Gallery of Art, once noted that Mr. McCall had “the quality and scope of imagination to travel in space, and carry us along with him.’’

Isaac Asimov was widely quoted as calling Mr. McCall “the nearest thing we have to an artist in residence in outer space.’’

Robert Theodore McCall was born in Columbus, Ohio. He grew up fascinated with airplanes and looking at Moon craters through a telescope, but the first painting he sold was of a dentist’s dog. He was paid $10 for it. He studied at an art school in Columbus and served in the US Army Air Forces during World War II as a bombardier instructor.

He worked in Chicago and New York illustrating advertisements and magazine articles, including science fiction in pulp magazines. In 1957, he went to Cape Canaveral in Florida to paint at the request of the Air Force.

His freelance work for Life magazine on the future of space exploration captivated NASA, which was starting to hire artists to add flair and emotional depth to portrayals of its work.

The other two artists NASA first approached were Mitchell Jamieson, a well-known illustrator who had worked with the Navy, and Andrew Wyeth, whom a poll had designated “America’s most popular painter.’’ Jamieson accepted, but Wyeth ultimately declined.

As the program grew, more venturesome and abstract artists were added to the realists first commissioned, including Robert Rauschenberg. Other artists in the program included Andy Warhol, Norman Rockwell, and the photographer Annie Leibovitz.

Though his illustrations of manned space flight include Alan Shepard’s first Mercury mission, Mr. McCall did not attend a launch until Gordon Cooper blasted off in May 1963. In an interview with Smithsonian magazine in 1984, Mr. McCall described the exquisite tension of riding an open-cage elevator to the space capsule with Cooper.

“You get in the habit of wanting these experiences,’’ he said, saying he imagined himself in Cooper’s shoes.

Mr. McCall went on to witness more than 25 more launches, including most trips to the moon and most space shuttle missions.

In addition to his wife of 64 years, the former Louise Harrap, Mr. McCall leaves their daughters, Linda and Catherine; five grandchildren; and six great-grandchildren.

Mr. McCall’s great disappointment was that he never made it to space. When NASA began a program to take people from other professions on shuttle missions, he was on the list.

But after Christa McAuliffe, a teacher, died when the space shuttle Challenger exploded on Jan. 28, 1986, that program was ended.