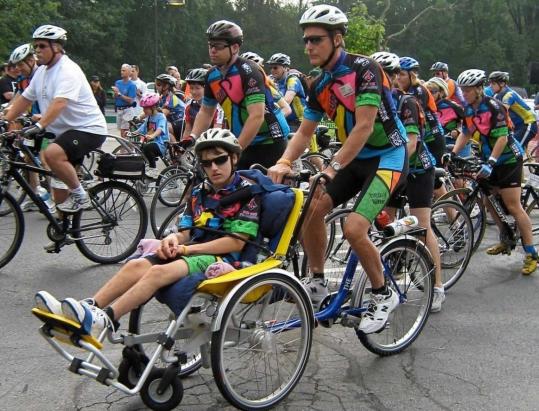 In 2008, in tandem with his father, Steven, on a specially modified bike, Graham Gardner did the Pan-Mass Challenge ride in honor of a late friend, raising $16,000 for the Jimmy Fund.
By Bryan Marquard Globe Staff / February 18, 2010

By common measures, Graham Hale Gardner could not communicate. Traveling in a wheelchair or a jogging stroller that accommodated his 110 pounds, he uttered not a word, and cerebral palsy rendered his hands unfit to navigate a keyboard.

Instead, blue-green eyes that seemed flecked with gold sent silent messages to the complete strangers drawn to his side. He had the kind of silky brown hair that people want to run their hands through, and many did.

“His face had a radiance, and he had a beautiful benevolence about him, so that when he looked at you and connected with you, you felt like the sun shone on your whole being,’’ said his mother, Cynthia. “He just made you a better person with his incredible grace and enthusiasm and kindness, and it was all done without conventional words.’’

Her son loved water. Buoyed by a flotation collar, he drifted beatifically in pools and oceans where waves soothed his recalcitrant muscles. While swimming with his father earlier this month at the YMCA in Marblehead, he suffered a seizure, went into cardiac arrest, and died Feb. 7 in Salem Hospital. He was 22.

Dr. Steven Gardner had brought his son to live in his Salem home just five weeks earlier, a few months after Graham completed a decade at Crotched Mountain School in Greenfield, N.H., which offers residential private special education up to age 21.

“There was this sort of paradoxical gift,’’ Steven Gardner said. “That is, Graham was incredibly needy and required help from other people, but those other people inevitably benefited in profound ways by being with him. That was his gift. This gift allowed others to be more loving and to spread that around. Once someone was affected that way, it became a ripple in a pond affecting those around that person.’’

Mr. Gardner also gave in a way that could be measured in monetary terms. In 2008, he and his father rode a modified tandem bicycle in the Pan-Mass Challenge. Inspired to participate by the death of one of Graham’s friends from Camp Jabberwocky, a summer retreat on Martha’s Vineyard for the disabled, they raised $16,000 for The Jimmy Fund.

“Graham was the athlete, and I was just lending him some muscle power,’’ his father said. “We found a profound togetherness when we did sports like that, bicycling, kayaking, windsurfing, skiing. Inside his body was an incredibly gentle soul, generous and patient and compassionate to the people who assisted him all the time. And he was a fun guy.’’

He was born in Salem Hospital, perhaps 100 yards from where he died. Mr. Gardner’s birth did not herald the life he would lead. His mother was a vegetarian who had run marathons and who walked 5 miles the day he was born.

Nothing seemed amiss at first. He was peaceful for three weeks, then started crying and did not stop. At 3 months, Mr. Gardner was evaluated at Massachusetts General Hospital, “and they said, ‘He has profound brain damage,’ ’’ his mother said.

As the crying subsided, something about Mr. Gardner was clear to everyone who looked at him, even as he grew up.

“He had a calmness about him, and he had eyes that looked right into your soul,’’ said his aunt, Mary Robb Jackson of Pittsburgh. “You always wished you could unlock what he was thinking, because he really looked out into the world in a special way.’’

Mr. Gardner’s parents parted ways before he turned 4. He lived in Marblehead with his mother, who insisted that he be allowed to attend public schools, where he forged a path for other children with significant disabilities. He also introduced classmates to the world of students who could go to school even if they couldn’t run and play.

“The children would be waiting for him every single morning,’’ his mother said. “The kids just completely embraced everything because he succeeded in showing them that this was possible.’’

At 11, he began living at Crotched Mountain School, returning to his mother’s home every weekend. Days in Marblehead meant 5-mile treks through neighborhoods, past houses, and shores. He reveled in the elements, welcoming all weather as he rolled along in the jogging stroller, viewing the world through wraparound sunglasses.

“I’d go on walks with him, and I was simply invisible,’’ his mother said. “People knew who he was. They had met him in school, or they had a communion with him that was just extraordinary.’’

Said his aunt: “Graham didn’t have any of that extraneous baggage, the things that get in the way of our lives and the way we relate to the world around us. His was a pure, absolute, innocent love and response to his life and the people around him and the things that brought him joy.’’

Using adaptive equipment, he could stand and move in a dance of sorts when his mother played music by the Allman Brothers or the Beatles. Journeying with his father on spring break from school, Mr. Gardner went to the Bahamas, where the water was luxurious and the sunsets peaceful.

“We danced every Saturday morning,’’ his mother said. “We lit candles every day for every meal, because every day is a celebration. There wasn’t a day when I didn’t thank God for his presence.’’

Constricted muscles could make simple movements a chore, but sometimes “he could gently reach over and put his hand on your thigh as you were driving the car as if to say, ‘It’s OK, I’m here,’ ’’ his mother said.

“Graham was very happy to be of this world, and God knows we were blessed to have him,’’ his aunt said.

“A life well loved is a life well lived, and he was loved for a lifetime in those 23 years,’’ his mother said of her son, who was a month shy of his birthday. “Lucky us.’’

The family plans to hold a memorial service at 2 p.m. Saturday in Old North Church in Marblehead.

“He looked at us and said, ‘What was Graham’s profession?’ We looked at each other, and Cynthia said, ‘Well, I guess angel,’ ’’ his father said. “The funeral director looked at us as if to say, ‘Are you serious?’ And we said, ‘Yes, we are; put that down.’ And the next line was employer, and we said, ‘Well, God.’ And darned if this guy didn’t write it down.’’

A few days later, the official document arrived in the mail from the state, his father said, “and it says, ‘Graham Hale Gardner, angel in the service of God.’ ’’

A look at Gardner's life