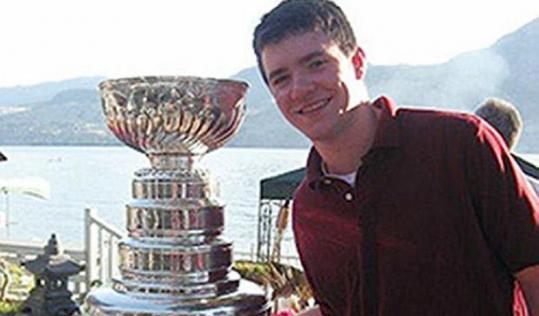 Brendan Burke posed with the Stanley Cup after his father’s team won it in 2007. (Burke Family Photo)
By Emma Stickgold Globe Correspondent / February 8, 2010

He grew up on the ice, wore skates at 3, and hung out in the locker rooms of National Hockey League teams. Brendan Burke’s life revolved around hockey, the sport of his father, Brian.

Mr. Burke was considering following in his father’s footsteps in sports team management but had also toyed with the idea of becoming a politician, and interned last summer for US Representative William D. Delahunt.

Mr. Burke’s name was well known in hockey circles after he came out as a gay man. In an ESPN.com column written by John Buccigross last year, Mr. Burke described what it was like to be a young, gay athlete, struggling to come to terms with his sexuality in a culture in which homophobic slurs are common.

He returned each year to Xaverian Brothers High School in Westwood, his alma mater, to talk to students at the all-boys Catholic school about his saga, and how his father, the general manager of the Toronto Maple Leafs and the United States men’s Olympic hockey team, was among his biggest supporters.

Mr. Burke, 21, a senior at Miami University in Ohio, died Friday in a car accident in Indiana. His friend Mark A. Reedy, 18, a first-year student at Michigan State University, also died in the crash, after the 2004 Jeep Grand Cherokee Mr. Burke was driving spun out of control and into traffic on US Route 35. They were heading east in Wayne County, and the local sheriff’s department said snowy and icy road conditions were factors in the accident.

“The National Hockey League grieves tonight for the family and friends of Brendan Burke, a young man of courage and character,’’ Gary Bettman, the NHL’s commissioner, said in a statement.

Mr. Burke “packed more into those 21 years than most people do in a lifetime,’’ said his brother Patrick, a scout for the Philadelphia Flyers. “He left his mark on so many people in so many ways.’’

Mr. Burke, who was born in Vancouver, British Columbia, quickly became hooked on hockey. A youth hockey goalie, he made the varsity team at Xaverian but declined the slot, saying he feared he would not receive enough ice time. The underlying issue was more complicated.

“Middle school and early high school is the first time I remember thinking that I could be gay, but I definitely tried to ignore it and didn’t want to seriously consider it,’’ he told ESPN.com. “It’s pretty easy to try and convince yourself that it’s not true, but it won’t work, ever.’’

Gay slurs had become more common in the locker room, and teammates were bragging about girls.

Mr. Burke graduated from high school in 2006 and headed to Miami University. He returned to hockey as a student manager of the team under coach Enrico Blasi.

He sipped from the Stanley Cup in 2007. Brian Burke, who was born in Providence and played hockey at Providence College, was general manager of the NHL champion Anaheim Ducks at the time.

In December 2007, Mr. Burke came out to two of his sisters, then to his brother Patrick. He was terrified about telling his father, but finally did.

“And I love you guys and wanted to tell you that I’m gay,’’ he recalled in the ESPN interview.

His father and stepmother gave him a big hug, told him they loved him, and then father and son watched hockey together. Brian Burke later invited him to the Toronto Pride Parade, which father and son attended..

“I had a million good reasons to love and admire Brendan,’’ Brian Burke told ESPN in the piece. “This news didn’t alter any of them . . . But this takes guts, and I admire Brendan greatly and happily march arm-in-arm with him on this. There are gay men in professional hockey. We would be fools to think otherwise. And it’s sad they feel the need to conceal this.’’

Brendan then came out to the Miami University hockey team, which also was supportive.

“Brendan is a great guy, personable and caring,’’ Blasi told ESPN.com. “I think having Brendan as part of our program has been a blessing. We are much more aware of what you say and how we say it. I am guilty as anyone. We need to be reminded that respect is not a label, but something you earn by the way you live your life.’’

Mr. Burke made friends with ease.

“The thing that everyone seems to remember is how easily and quickly he’d start up a conversation - when he was 4 years old, we’d take him out to the playground, and an hour later, everyone on the playground would know him,’’ his brother said.

Mr. Burke worked for a time at Pure Hockey in Braintree, selling sports equipment. Last summer, he headed to Washington, D.C., to intern in Delahunt’s office, and was smitten by politics.

“Brendan was an incredibly talented and gifted person who was smart beyond his years,’’ said Mark Forest, a spokesman for Delahunt. “Congressman Delahunt once said Brendan possessed a very special gift and deep compassion for others that would make him an outstanding public servant.’’

Forest said Mr. Burke picked up on the nuances of the often-bewildering office and often helped the congressman tackle concerns of constituents. He worked during the health care reform debate, when the office was inundated with calls.

“He’s probably one of the best interns we’ve ever had,’’ said Forest. “He had a bright future ahead of him.’’

The idea of running for office one day intrigued him. He still enjoyed hockey, though, and had applied to law school as he headed into the second semester of his senior year.

As his story became known, his e-mail inbox was deluged with notes from people telling him how inspiring his story was, family said.

“I think it’s important my story is told to people, because there are a lot of gay athletes out there and gay people working in pro sports that deserve to know there are safe environments where people are supportive regardless of your sexual orientation,’’ he told TSN not long after his story became public.

A funeral Mass will be said at 10:30 a.m. tomorrow at St. John the Evangelist Church in Canton. Burial will be private.