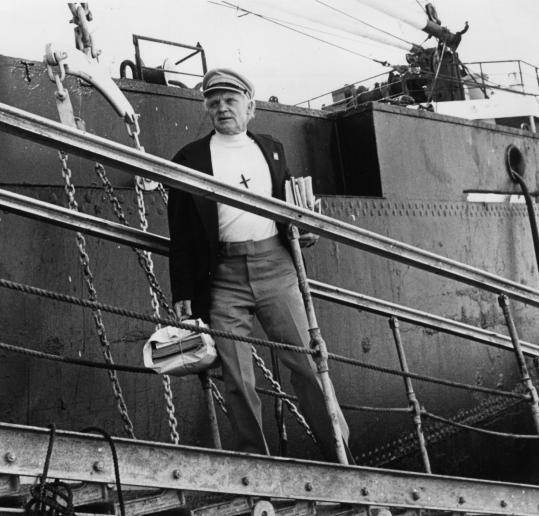 The Rev. Wallace E. Cedarleaf retired as Boston Harbor chaplain 17 years ago, but he is vividly recalled along the waterfront and among the thousands of seamen of foreign vessels that docked here during his 25-year tenure.

“Wally was bigger-than-life. Everyone who knew him didn’t forget him,’’ said the Rev. Jim Lindgren, who succeeded him as administrator and chaplain of the New England Seafarers Mission on the waterfront.

Rev. Cedarleaf, who started other port chaplaincies throughout New England and who was honored as “a servant to mankind’’ by the International Council of Seamen’s Agencies in Corpus Christi, Texas, in 1985, died of cardiopulmonary arrest at his Scituate home Jan. 18. He was 91.

He started with the mission in 1968 and for much of that time was its administrator as well as its chaplain.

In honoring him, the mission said, “He is Padre to some, Father to others, maybe Reverend or Sir, but always friend who reaches out to the four corners of the earth, sometimes with tears streaming down his face in compassion, sometimes with sweet laughter in his heart, sometimes with stubborn determination in defense of the helpless. But, always with love.’’

Rev. Cedarleaf was a handsome man, with a shock of wavy white hair and electric blue eyes from his Swedish ancestry. His daughter, Diane, of Lusaka, Zambia, said his signature outfit was a Greek sailor’s hat, turtleneck sweater, and driftwood cross around his neck.

“Wally was a very colorful person with a real heart for seafarers. Defending those who were defenseless was part of his life,’’ said Lindgren, now at the International Maritime Center in Oakland, Calif.

In 1983, Lindgren recalled, when the owner of a Greek-registered ship docked in Boston had not paid his crew for some time, Rev. Cedarleaf went to the Greek consulate and to the press, which took up the seamen’s cause. The men were paid and sent home.

Rev. Cedarleaf achieved much recognition for his ministry. His daughter said he was on the “Today’’ show in 1983, that he was recognized for his service by the US House of Representatives in 1993, and that, as a much younger man, “rode his motorcycle with Father Paul Pilson and the Rolling Sprockets of Susquehanna County, N.Y.,’’ a local motorcycle club.

In 1963, he took part in Dr. Martin Luther King’s March on Washington. He also “cultivated giant sunflowers, excelled in storytelling, was a masterful raconteur of jokes, and delighted in loud clothing,’’ she said.

She recalled another ship with which he was involved in 1979. The Sea Shepherd, a former British sea trawler chosen to stop the killing of baby harp seals on the ice floes of Eastern Canada, had stopped in Boston “to load its bow with concrete with the intention of ramming and sinking the whaler, ‘Sierra,’ ’’ then operating in Portuguese waters. He got a promise from the Shepherd’s captain that none of his crew would be lost and then blessed the ship, his daughter said.

“Wally was a very dynamic man,’’ said Raymond A. Wallace of North Easton, a longtime member of the mission’s board who often went aboard visiting ships with Rev. Cedarleaf.

They were tankers, freighters, container ships, bulk carriers, passenger ships, all with crews far from home and lonely.

Rev. Cedarleaf brought them small gifts, reading material, toiletries. He helped many non-English-speaking crew members call home. He took them on shopping trips to Boston for clothing. He listened to their woes.

For years, Rev. Cedarleaf’s letter to the editor would appear in the Globe on Christmas as an appeal to the public to send small gifts to the visiting seaman during the holidays. He would have his wife, Ethel, and the other women in the group Seamen’s Friend Society knit hats for gift packages for the crews. Some 2,000 “ditty bags’’ and other gifts would be delivered aboard the ships.

No matter where he went, Rev. Cedarleaf would look for books, magazines, and good used clothing that visiting seamen might use. A 1979 Globe story told how he once showed up at a Boston pier with National Geographic magazines in the trunk of his car. The visiting seaman who surrounded him responded with “!’’

Rev. Cedarleaf might have been the first to chuckle. Friends said he had a great sense of humor.

“Wally was a character in the best sense of the word and very witty,’’ said Dr. Timothy Johnson, a local television doctor and fellow minister. “He was a very bright man but spoke very down-to-earth. He had this Pied Piper manner, especially with kids.’’

Marcia Johnson of Easton, a former member of the mission’s board, also spoke of Rev. Cedarleaf’s kindness. Expecting a dour minister when they met, she found “a very dapper, meticulously dressed man, very much a gentleman. So many of the visiting seamen, she said, were from Third World countries who had been gone so long they had yet to see newborn children. In the 1960s and ’70s, these men were paid $6-a-month.

To help them, Rev. Cedarleaf had a phone set up in the mission that they could use for free. When container ships began arriving and crews had only two hours ashore, “a raging toothache’’ or a burst appendix had to wait until Rev. Cedarleaf found a maritime lawyer to represent them.

Rev. Cedarleaf was born in Rockford, Ill., to Swedish immigrants and devout churchgoers at the Bethesda Covenant Church. The family was known even then as caring for others, his daughter said. Young Wallace attended North Park College and Seminary in Chicago. He was ordained in the Evangelical Covenant faith in 1945 and assigned to the Evangelical Covenant Church in New Sweden, Maine.

While a counselor at a summer camp in Connecticut, he met Ethel (Swedlund). They married in 1945, and his wife was a helpmate in all his work, friends said.

Rev. Cedarleaf moved his family to Scituate 41 years ago, where he was active on the Council on Aging and took long walks on the beach.

“For Dad,’’ said his son, David of Kamas, Utah, and Costa Rica, “there was a difference between spirituality and religion. Everyone was the same. He didn’t preach. There was no fire and brimstone. He just offered everyone love and forgiveness.’’

In addition to his wife, son, and daughter, Rev. Cedarleaf leaves six grandchildren.

A celebration of his life will be held in the summer in Scituate.