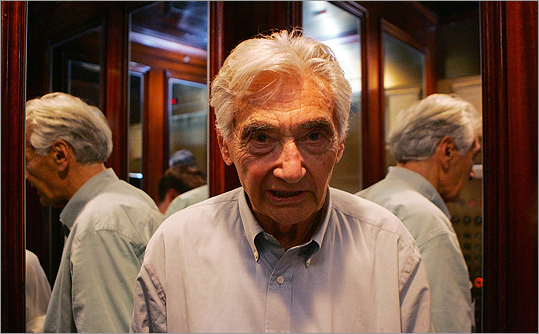 Howard Zinn, the Boston University historian and political activist whose books such as “A People’s History of the United States” prompted a generation to rethink the nation’s past, died yesterday in Santa Monica, Calif., where he was traveling. He was 87, and lived in the Newton village of Auburndale. His daughter, Myla Kabat-Zinn of Lexington, said he had a heart attack.

“He’s made an amazing contribution to American intellectual and moral culture,” Noam Chomsky, the activist and MIT professor, said last night. “He’s changed the conscience of America in a highly constructive way. I really can’t think of anyone I can compare him to in this respect.”

“He opened up approaches to history that were novel and highly significant,” Chomsky said. “Both by his actions and his writings for 50 years, he played a powerful role in helping and in many ways inspiring the civil rights movement and the antiwar movement.”

For Dr. Zinn, activism was a natural extension of the revisionist brand of history he taught. “A People’s History of the United States” (1980), his best-known book, had for its heroes not the Founding Fathers - many of them slaveholders and deeply attached to the status quo, as Dr. Zinn was quick to point out - but rather the farmers of Shays’ Rebellion and the union organizers of the 1930s.

As he wrote in his autobiography, “You Can’t Be Neutral on a Moving Train” (1994): “From the start, my teaching was infused with my own history. I would try to be fair to other points of view, but I wanted more than ‘objectivity’; I wanted students to leave my classes not just better informed, but more prepared to relinquish the safety of silence, more prepared to speak up, to act against injustice wherever they saw it. This, of course, was a recipe for trouble.”

Certainly, it was a recipe for rancor between Dr. Zinn and John Silber, former president of Boston University. Dr. Zinn, a leading critic of Silber, twice helped lead faculty votes to oust the BU president, who in turn once accused Dr. Zinn of arson (a charge he quickly retracted) and cited him as a prime example of teachers “who poison the well of academe.”

Dr. Zinn was a cochairman of the strike committee when BU professors walked out in 1979. After the strike was settled, he and four colleagues were charged with violating their contract when they refused to cross a picket line of striking secretaries. The charges against “the BU Five” were soon dropped.

In 1997, Dr. Zinn slipped into popular culture when his writing made a cameo appearance in the film “Good Will Hunting.” The title character, played by Matt Damon, lauds “A People’s History” and urges Robin Williams’s character to read it. Damon, who co-wrote the script, was a neighbor of the Zinns when growing up.

“Howard had a great mind and was one of the great voices in the American political life,” Ben Affleck, Damon’s longtime friend and his costar in “Good Will Hunting,” said in a statement. “He taught me how valuable, how necessary dissent was to democracy and to America itself. He taught that history was made by the everyman, not the elites. I was lucky enough to know him personally, and I will carry with me what I learned from him - and try to impart it to my own children - in his memory.”

Damon was later involved in a television version of the book, “The People Speak,” which ran on the History Channel in 2009, and he narrated a 2004 biographical documentary, “Howard Zinn: You Can’t Be Neutral on a Moving Train.”

“Howard had a genius for the shape of public morality and for articulating the great alternative vision of peace as more than a dream,” said James Carroll, a columnist for the Globe’s opinion pages whose friendship with Dr. Zinn dates to when Carroll was a Catholic chaplain at BU. “But above all, he had a genius for the practical meaning of love. That is what drew legions of the young to him and what made the wide circle of his friends so constantly amazed and grateful.”

Dr. Zinn was born in New York City on Aug. 24, 1922, the son of Jewish immigrants, Edward Zinn, a waiter, and Jennie (Rabinowitz) Zinn, a housewife. He attended New York public schools and was working in the Brooklyn Navy Yard when he met Roslyn Shechter.

“She was working as a secretary,” Dr. Zinn said in an interview with the Globe nearly two years ago. “We were both working in the same neighborhood, but we didn’t know each other. A mutual friend asked me to deliver something to her. She opened the door, I saw her, and that was it.”

He joined the Army Air Corps, and they courted through the mail before marrying in October 1944 while he was on his first furlough. She died in 2008.

During World War II, he served as a bombardier, was awarded the Air Medal, and attained the rank of second lieutenant. After the war, Dr. Zinn worked at a series of menial jobs until entering New York University on the GI Bill as a 27-year-old freshman. He worked nights in a warehouse loading trucks to support his studies. He received his bachelor’s degree from NYU, followed by master’s and doctoral degrees in history from Columbia University.

Dr. Zinn was an instructor at Upsala College and a lecturer at Brooklyn College before joining the faculty of Spelman College in Atlanta, in 1956. He served at the historically black women’s institution as chairman of the history department. Among his students were novelist Alice Walker, who called him “the best teacher I ever had,” and Marian Wright Edelman, future head of the Children’s Defense Fund.

During this time, Dr. Zinn became active in the civil rights movement. He served on the executive committee of the Student Nonviolent Coordinating Committee, the most aggressive civil rights organization of the time, and participated in numerous demonstrations.

Dr. Zinn became an associate professor of political science at BU in 1964 and was named full professor in 1966.

The focus of his activism became the Vietnam War. Dr. Zinn spoke at many rallies and teach-ins and drew national attention when he and the Rev. Daniel Berrigan, another leading antiwar activist, went to Hanoi in 1968 to receive three prisoners released by the North Vietnamese.

Dr. Zinn’s involvement in the antiwar movement led to his publishing two books: “Vietnam: The Logic of Withdrawal” (1967) and “Disobedience and ” (1968). He had previously published “LaGuardia in Congress” (1959), which had won the American Historical Association’s Albert J. Beveridge Prize; “SNCC: The New Abolitionists” (1964); “The Southern Mystique” (1964); and “New Deal Thought” (1966).

In addition to his daughter, Dr. Zinn leaves a son, Jeff of Wellfleet; three granddaughters; and two grandsons. Funeral plans were not available.