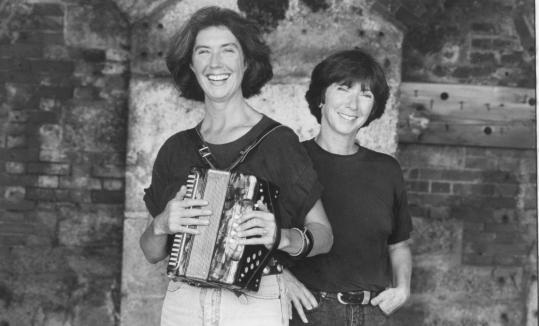 NEW YORK - Kate McGarrigle, a Canadian singer who, with her sister Anna, captivated critics and fellow musicians with warm harmonies and a style that drew on both folk traditions and the personalized approach of 1970s singer-songwriters, died Monday at her home in Montreal. She was 63.

The cause was clear-cell sarcoma, a form of cancer, said Barry Taylor, the manager for Ms. McGarrigle’s son, the singer Rufus Wainwright.

Born in Montreal and raised in St.-Sauveur-des-Monts, a small town about 50 miles north of the city, Ms. McGarrigle absorbed a range of musical traditions around a musical hearth.

Her father, Frank, was of Irish-Canadian stock and steeped in Stephen Foster and turn-of-the-century parlor songs. From her mother, Gaby, she and her two elder sisters - the oldest McGarrigle sister, Jane, was a church organist - learned old songs in French.

“Music was always there at home,’’ Ms. McGarrigle said in a 1997 interview in Sing Out! magazine. “At parties, somebody would get up and sing, and my father would accompany them and sing the harmony. There were lots of friends and uncles, and each would get up and give their big song.’’

In the 1960s, Kate, Anna, and two boyfriends formed the Mountain City Four, which became one of Montreal’s leading folk groups. Kate, 14 months younger than Anna, also studied engineering and science at McGill University, and in 1970 she moved to New York City for a career as a musician.

In 1974, Warner Brothers signed Kate and Anna to a recording contract. Their first album, “Kate and Anna McGarrigle,’’ was released in 1976.

Critics were smitten. “Their voices have a plaintive allure full of light vibrato and husky emotionalism, and they blend together exquisitely in harmonies,’’ John Rockwell wrote in The New York Times. Rolling Stone’s review declared, “Not since Carole King’s ‘Tapestry’ has the female voice been recorded with such unblemished intimacy.’’

But with Kate pregnant, the McGarrigles did not tour for more than a year after the album was released, and however many accolades they received from critics, their songs did not fit radio playlists.

They released 10 albums, most recently “The McGarrigle Christmas Hour’’ in 2005, but their biggest commercial success came when other singers recorded their songs, most notably Linda Ronstadt (Anna’s “Heart Like a Wheel’’) and Maria Muldaur (Kate’s “Work Song’’).

Love and family life were central themes in both women’s music.

Martha, like Rufus, has become a noted singer and songwriter. Their father is the singer-songwriter Loudon Wainwright III, who was married to Ms. McGarrigle in the 1970s. That marriage ended in divorce. Both children survive her, as do her two sisters and a grandson.

The McGarrigle sisters rarely toured, but when they performed it often became a family affair, with musical friends and relatives sitting in. Their 1998 album “The McGarrigle Hour’’ used this model, with Ronstadt, Emmylou Harris, and Martha, Rufus, and Loudon Wainwright.