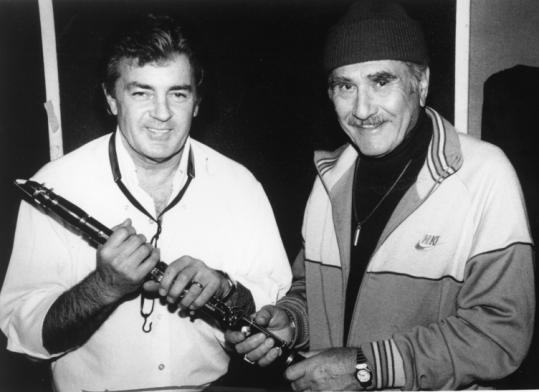 As one colleague saw him, Dick Johnson was the Statue of Liberty among local jazz musicians.

The former director of the Artie Shaw Orchestra, a musician who played alongside Tony Bennett, Frank Sinatra, and many other noted singers, died Sunday of unknown causes at Boston’s Beth Israel Deaconess Medical Center. He was 84 and had multiple illnesses.

“Nobody ever treated musicians better than Dick Johnson,’’ Bennett wrote in an e-mail yesterday. “Artie Shaw called him the greatest clarinetist he ever heard. I’ll really miss him. He was the best.’’

Mr. Johnson was best known in the music industry for his showmanship and his love for life. “I don’t know anybody else who had a bigger passion for music,’’ said his daughter, Pamela Sargent of Waltham. “He lived and loved playing and enjoying music.’’

Born in Brockton, Mr. Johnson grew up with music. As a child, he would gather around his mother’s piano with his sister and friends while other family members played and sang. His musical roots extended to his uncle, Mayhew Lake, a noted arranger.

After graduating from Brockton High School in 1942, Mr. Johnson served in the Navy for two years on the USS Pasadena during World War II. He joined the Navy band and mastered the clarinet, flute, and saxophone.

After the war, Mr. Johnson toured the country with the big bands of Charlie Spivak and Buddy Morrow before settling down in Brockton. He joined his childhood friend Lou Colombo in a jazz sextet that lasted 10 years. Mr. Johnson also formed his septet, Swing Shift, a staple on the Boston music scene for years.

“He was the best because he practiced more than six hours a day,’’ said Colombo, of Yarmouth.

Mr. Johnson also either performed with or recorded over the years with such music greats as Dave McKenna, Herb Pomeroy, Nat King Cole, Charlie Parker, Dizzy Gillespie, and Buddy Rich. Mr. Johnson recorded his own albums on the EmArcy, Riverside, and Concord jazz labels.

Boxing champion Rocky Marciano, a fellow Brockton native, was a good friend. According to Mr. Johnson’s son-in-law Gray Sargent, Mr. Johnson drove Marciano to many of his early matches in the region before the pugilist gained fame in the sport. Mr. Johnson even played the music at Marciano’s wedding.

Ron Della Chiesa, a radio personality with Boston’s WCRB-FM, met Mr. Johnson in the late 1950s and was amazed by his charisma.

“Dick was a great in jazz music,’’ Della Chiesa said. “He would be scheduled to be on my radio show for only five or 10 minutes and end up staying for nearly an hour. He was a joy to talk to, and he played great music on the air.’’

One of the highlights of his career was being tapped by his mentor to restart and be the director of the Artie Shaw Orchestra, which Mr. Johnson led from 1983 to 2006. “It was the thrill of Dick’s career to revive the band,’’ said Gray Sargent. “This helped bring Artie Shaw to younger audiences.’’

Shaw, who had retired from playing his clarinet in the early 1950s, occasionally joined Mr. Johnson and the orchestra.

Another highlight was the long list of musicians Mr. Johnson mentored, including Greg Hopkins, a professor of jazz composition at Berklee College of Music in Boston. Hopkins met Mr. Johnson in the late 1970s, and the two played gigs across the region. He remembers Mr. Johnson for his ability to play diverse types of music, from swing to big band to smooth jazz.

“Playing with Dick was the most uplifting experience in my career,’’ Hopkins said. “He was the Statue of Liberty of Boston’s jazz scene. He wasn’t a formal music teacher, but gave a lot of lessons to other aspiring musicians.’’

In addition to his daughter Pamela, Mr. Johnson leaves his wife of 59 years, Rose of Brockton, and a son, Gary of Easton.