David Barish, 88, was pioneer in the design and testing of early paragliders 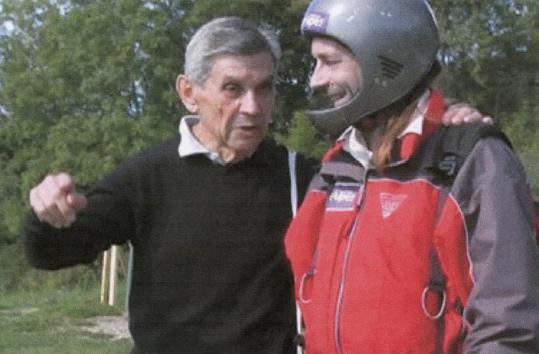 NEW YORK - Loping down a slope near a mountaintop or leaping from a cliff, they capture the wind in the nylon canopy they carry in their knapsacks, then rise in a thermal to thousands of feet to float and swoop for mile after mile.

For decades, thousands of enthusiasts have scaled peaks around the world or climbed hills above rolling meadows to experience the thrills and joys of paragliding. They owe that experience in large part to David Barish.

Mr. Barish, who was once referred to as the forgotten father of paragliding, invented a single-surface airfoil that, along with a similar version by another designer, evolved into the paraglider of today. He died Dec. 15 at the age of 88 in Manhattan, where he lived. His son Craig said the cause was multiple myeloma.

Mr. Barish was an enthusiast: He went on his last flight last year, his son said.

Paragliding and its sister sport, hang gliding, are the fruits of the work of three aeronautical engineers, Mr. Barish among them, who competed in the early 1960s to design a parachutelike device that could lower the Apollo space capsule to earth, gently and on an angle.

But in the space race with the Soviet Union, NASA decided in 1964 to go with an old-fashioned parachute and accept the bump that came with the splash when the capsule hit the ocean. That ended the competition.

One of the competitors, Francis Rogallo, invented the hang glider, which with its skeletal frame differed from the paragliders designed by Mr. Barish and Domina Jalbert. Paragliders have no frame connecting the canopy to the flier’s harness. That allows them to be more easily taken by backpack into remote and rocky regions.

“This is the most portable, affordable, unique form of aviation that’s out there, which David made it possible for all of us to enjoy,’’ Nick Greece, the editor of the United States Hang Gliding and Paragliding Association Magazine, said in an interview.

The scaled-down version of Mr. Barish’s original design “has enabled pilots worldwide to foot-launch from mountains and cross spectacular terrain without an engine, experiencing the landscape from a true birdlike perspective,’’ Greece continued. “They sometimes reach 17,000 feet, then land, pack up, and hitchhike back.’’

As its name indicates, Mr. Barish’s original single-surface airfoil was made from one sheet, sewn from a boat’s spinnaker. Later models used ripstop nylon, an interwoven fabric that minimizes tears from the air rushing in to lift the glider. Jalbert’s double-surface sail was made of two sheets.

These were not small contraptions. Mr. Barish’s model was 90 feet long and 27 feet wide. He tested it by air-towing armored personnel carriers.

“Barish really broke new ground, not only with the device, but also with his testing methods,’’ said Dan Poynter, the author of “Hang Gliding: The Basic Handbook of Skysurfing’’ (1974).

Testing methods that Mr. Barish later devised for a far smaller model, 27 feet long and 9 feet wide, made it possible for more than 200,000 people around the world to become paragliders.

“He tested it with an automobile,’’ Poynter said, and sometimes from the front of the Staten Island ferry, to adjust its tailoring.

For the first flight, on Oct. 15, 1965, Mr. Barish slipped into the harness and flew about 200 feet down a slope at a ski resort in the Catskills. The distance record for a paraglider is now 311 miles, and the record for staying aloft is 11 hours.

In the summer of 1966, Mr. Barish and his son Craig toured ski resorts from Vermont to California, demonstrating that “slope soaring’’ could be a viable summer activity for the resorts. Although it would take years before Mr. Barish gained recognition, his barnstorming tour laid the groundwork for the sport.

“It was probably too soon,’’ Mr. Barish told magazine in 2002. “At that time, slope soaring was just for fun. We didn’t know that it might be possible to soar in thermals or dynamic wind.’’

David Theodore Barish was born in Passaic, N.J., +one of four children of Philip and Gertrude Barish. His fascination with flight was kindled by the landing of a JN-4 “Jenny’’ biplane across the road from the family home, his son Craig said.

Besides his son Craig, Mr. Barish leaves his wife, Johanna Roman Barish; another son, Dana; and a daughter, Wendy. He is predeceased by two wives, the former Kavvy Kosunen and the former Frances Lyons.

When he was 18, Mr. Barish enrolled in a federal training program that led to his hiring as a copilot for Trans World Airlines. In 1944, his brother, Steven, a bomber pilot, was killed during the Normandy invasion.

Mr. Barish signed up for training as a fighter pilot. But he graduated on the day Japan surrendered and was soon enrolled at the Air Force Institute of Technology where, in 1948, he received a bachelor’s degree in aeronautical engineering. The Air Force sent him to the California Institute of Technology, where he obtained a master’s degree in aerodynamics. After four years as a test pilot, he left the service and became a consultant to the Air Force and, eventually, to NASA.

The full realization of what he had helped start struck Mr. Barish only in 1993. He was driving near Ellenville, N.Y., he told Cross Country magazine, when he spotted more than 30 paragliders circling a hillside like birds.