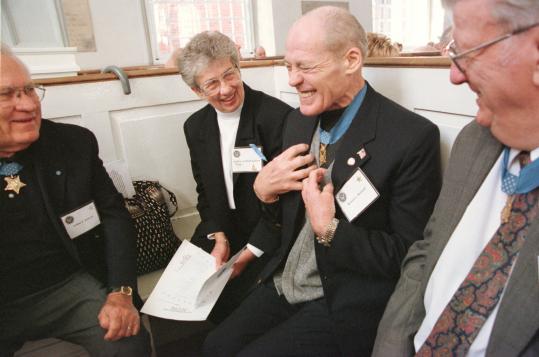 In 2001, Robert L. Howard (second from right), recipient of the Congressional Medal of Honor, told war stories at the Old North Church in Boston. The medal citation credited him for his “complete devotion to the welfare of his men at the risk of his life.’’ (Sevans/Associated Press)
By Richard Goldstein New York Times / December 26, 2009

NEW YORK - Colonel Robert L. Howard, one of the Vietnam War’s most highly decorated servicemen, who was awarded the Medal of Honor for rescuing fellow Green Berets while wounded and under enemy fire, died Wednesday at a hospice in Waco, Texas. He was 70.

The cause was pancreatic cancer, said his son-in-law Frank Gentsch.

In December 1968, Colonel Howard, a first class sergeant at the time, was in a platoon of US and South Vietnamese troops who came under fire while trying to land their helicopters on a mission to find a missing Green Beret. As the men set out after a prolonged firefight to clear the landing zone, they were attacked by some 250 North Vietnamese troops.

As related in “Medal of Honor: Portraits of Valor Beyond the Call of Duty,’’ by Peter Collier, Colonel Howard was knocked unconscious by an exploding mine. When he came to, his eyes were bloodied and his hands injured by shrapnel that had also destroyed his rifle. He heard his lieutenant groaning in pain a few yards away. He then saw an enemy soldier with a flamethrower burning the bodies of American and South Vietnamese soldiers who had just been killed.

Colonel Howard was unable to walk, but he threw a grenade toward the soldier with the flamethrower and grabbed the lieutenant. As he was crawling with him toward shelter, a bullet struck his ammunition pouch, blowing him several feet down a hill. Clutching a pistol given to him by a fellow soldier, Colonel Howard shot several North Vietnamese soldiers and got the lieutenant down to a ravine.

Taking command of the surviving and encircled Green Berets, Colonel Howard administered first aid, encouraged them to return fire, and called in air strikes. The Green Berets held off the North Vietnamese until they were evacuated by helicopters.

Having gained an officer’s commission after that firefight, he received the Medal of Honor from President Nixon on March 2, 1971. The citation credited him for his “complete devotion to the welfare of his men at the risk of his life.’’

Robert Lewis Howard was born in Opelika, Ala.. He entered the Army in 1956 at age 17 and joined the 101st Airborne Division, his father and four uncles having served in the paratroopers during World War II.

In 1965, he was wounded in the face in Vietnam by a ricocheting bullet. While recuperating in a field hospital, he was recruited for the Special Forces, commonly known as the Green Berets.

He remained in the military until 1992, then worked for the Department of Veterans Affairs.

During a visit there in April, together with Gary Littrell, another Medal of Honor recipient, who had been a sergeant in Vietnam, one soldier asked how they had remained motivated during the war and, in turn, how they had motivated their men.

“We had no choice but to stay motivated as leaders,’’ Howard said. “As for our soldiers, we reminded them that God and country came before our needs.’’