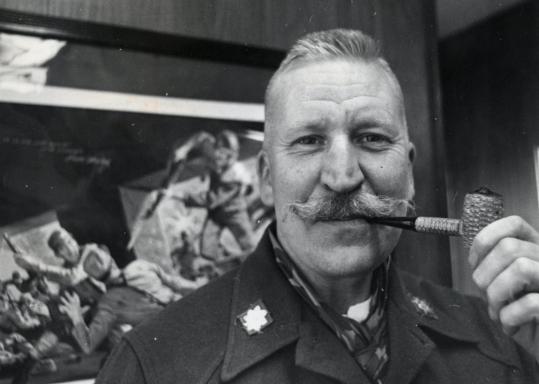 Colonel Lewis Millett was so determined to fight the Nazis that he deserted the US Army as a teenager and enlisted in the Royal Canadian Artillery Regiment in 1940.

“He was mad because it didn’t look like the United States was going to go,’’ said his brother Albert of Mechanic Falls, Maine. “He went to Canada because he wanted to fight against Hitler.’’

Colonel Millett, a career Army officer who was awarded the Medal of Honor in 1951 after leading a bayonet charge up a hill in Korea, said in a 2006 interview, “I must be the only regular Army colonel who has ever been court-martialed and convicted of desertion.’’

Colonel Millett, who grew up in Dartmouth, died Saturday of heart failure at a veterans hospital in Loma Linda, Calif., near his home in Idyllwild. He was 88.

President Truman presented him with the Medal of Honor, citing his actions in leading his men under heavy fire in a ferocious attack to take Hill 180 near the village of Soam-Ni on Feb. 7, 1951.

Colonel Millett, then a captain, had seen Chinese propaganda fliers saying that Americans were afraid of hand-to-hand combat.

“When I read that, I thought, ‘I’ll show you,’’ he said in a 2006 interview with the journal Military History.

He trained his men in “cold steel’’ combat. After one of his platoons was pinned down, he ordered his men to fix bayonets. Despite being wounded in the leg by shrapnel, he led the charge while lobbing grenades and bayoneting and clubbing the enemy.

The official medal citation reads: “His dauntless leadership and personal courage so inspired his men that they stormed into the hostile position and used their bayonets with such lethal effect that the enemy fled in wild disorder.’’

The assault, according to historian S.L.A. Marshall, was “the most complete bayonet charge by American troops since Cold Harbor,’’ a Civil War battle in 1864.

Born in Mechanic Falls, Lewis L. Millett was taken to Massachusetts when his mother divorced his father and remarried.

He was headstrong as a toddler and once slipped away to explore the railroad yard when he could barely walk, his brother said.

“My mother would tie him to a chair while she was hanging clothes so he couldn’t get away after that,’’ said Albert.

Colonel Millett grew up hearing stories of his great grandfather’s military service during the Civil War and of an uncle’s heroics during World War I as a member of the 101st Artillery Regiment from Massachusetts, his brother said.

He joined the same regiment in 1938, during high school in Dartmouth.

“I was vice president of my high school senior class and was invited to make a speech on Memorial Day 1940,’’ he told Military History. “I put on my National Guard uniform for the occasion. Adolf Hitler had overrun Europe, and I warned my classmates that we would soon be in a war. I told them that it was better to go prepared. So I joined the Army Air Corps.’’

But he left the Army and hitchhiked to Canada with a friend who had a bad conduct discharge from the Marines and enlisted in Canada.

By the time Colonel Millett was sent to England as a radar operator, the United States was in the war. He transferred to the US Army. As a member of the 27th Armored Field Artillery of the First Armored Division, he participated in the Allied invasion of North Africa, where he earned a Silver Star after driving a burning halftrack loaded with ammunition away from US troops and jumping out just before it exploded.

He continued with his regiment, fighting in Italy until his past caught up with him. He was court-martialed for desertion, lost his leave privileges, and was fined $52.

“He didn’t give a hoot about the leave privileges because he wasn’t going anywhere anyway, but he was a little annoyed about the 52 bucks,’’ his brother said. “They told him they had to do that so they could promote him.’’

After World War II, he enrolled in Bates College in Lewiston, Maine, and studied three years before he was called to duty in Korea. He later earned a bachelor’s degree from Park College in Missouri in the 1960s.

In 1951, he met Winona Williams during festivities surrounding the Medal of Honor awards ceremony, according to his sister, Alice Pepin of Turner, Maine. They were married more than 40 years when she died in 1993. His first marriage to Virginia Young had ended in divorce.

After Korea, Colonel Millett became an intelligence officer and was sent to Vietnam. He commanded the training center of the Army Security Agency at Ft. Devens in the mid-1960s.

He retired in 1973, frustrated that the United States had “quit’’ the fight in Vietnam, he said.

“He had an unqualified love of country and was uncompromising in his support of his men,’’ said Michael Goldware, who chaired a committee that built the National Medal of Honor Memorial at Riverside National Cemetery in 1999 in California.

“Lou might have contended he was born 170 years too late,’’ Goldware said. “Without question, he would have been one of the original Sons of Liberty.’’

“He was extremely proud of his country and proud of his men who fought under him,’’ Pepin said. “Even after he retired from the Army, he still visited many of the Army bases to talk to the young men, especially those deployed to the Far East.’’

In 1985, one of Colonel Millett’s sons, Army Staff Sergeant John Millett, died in an airplane crash in Newfoundland that killed 240 returning troops. They were returning from a peacekeeping operation on the Sinai Peninsula in the Middle East.

The loss inspired Colonel Millett to write a poem titled “A Soldier’s Prayer.’’ He often recited the poem during public appearances, beginning with the opening line, “I’ve fought when others feared to serve.’’

In addition to his brother and sister, Colonel Millett leaves his sisters Ellen Larrabee of Auburn, Maine, and Marion Finnerty of Green Cove Springs, Fla.; his sons L. Lee Jr. and Timothy of Idyllwild; a daughter, Elizabeth of Reno, Nev.; and four grandchildren.

Funeral services will be at 10 a.m. Dec. 5 at the Medal of Honor Memorial in the Riverside National Cemetery.