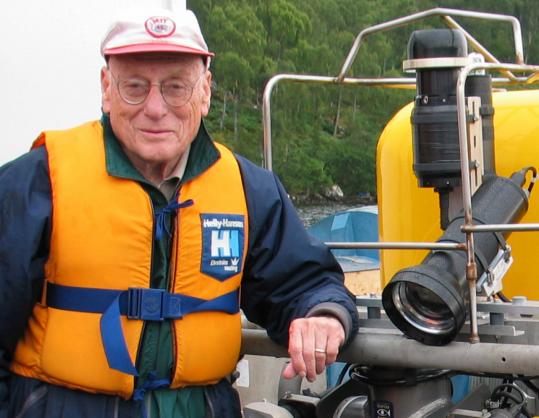 Even if Robert H. Rines had never seen what he believed was the hulking hump of a creature break the surface of Scotland’s Loch Ness, his life would have captured imaginations and filled a lengthy resume.

Patents on his inventions number more than 80, including those for devices that sharpened the resolution of radar and sonar scanning. He founded Franklin Pierce Law Center in New Hampshire and helped push patent and intellectual property law into the legal spotlight. He taught at Harvard and MIT and, along with being a lawyer, had degrees in physics and microwave technology. He also composed music for Broadway and shared an Emmy for a show that ran on TV and the stage.

Then there’s the anecdote about an encounter with a man who heard him, then about 11, playing violin at a camp in Maine. Impressed, the man asked to borrow a violin and played a duet with the young musician.

“That gentleman turned out to be Albert Einstein,’’ said his wife, Joanne Hayes-Rines. “People just don’t have stories like that in their lives.’’

Few people have lives to match the one lived by Dr. Rines, who died of heart failure Sunday in his Boston home. He was 87 and had spent the past 37 years lending his hefty intellectual bona fides to the search for a creature in the waters of Loch Ness.

“It looked like the back of an elephant,’’ he told the Globe in 1997, recalling that moment in 1972 when he looked out the window of a friend’s house in Scotland during a tea party and watched the curve of something he couldn’t identify repeatedly disturb the water’s surface. “I know there was a big unknown thing in that lake. That’s why I haven’t let go.’’

Clinging tight to a pursuit that many dismissed as a fool’s errand inevitably brought detractors, but he shrugged off criticism of his search, which never was rewarded with conclusive proof.

“There are few of us willing to risk our reputations on something as improbable as this, judged with such ridicule,’’ he told Boston Magazine in 1998. “Scientists think there are other things to do for fame and fortune than something this crazy. So we do it quietly as a private venture and don’t have to hear that we’re ‘crazy people chasing monsters and wasting public funds.’ ’’

The Loch Ness creature known as Nessie was but one of the passions that kept Dr. Rines working at an exhausting pace until a couple of years ago, when a stroke forced his body, if not his mind, to slow down.

“He was still working,’’ his wife said yesterday. “He had a meeting with clients the week before he died.’’

A significant figure in the fields of intellectual property and patent law, Dr. Rines never lacked for students, lawyers, and clients who wanted his time, teaching, and counsel.

“I think we’ve lost a tremendous advocate for those who have deep technical training as a first base, and go on to shape law and policy around the globe,’’ said Dedric Carter, assistant dean of engineering at MIT.

“Bob Rines was a true visionary in a field of endeavor - law - in which visionaries are in short supply,’’ said John Hutson, dean and president of Franklin Pierce Law Center. “Lawyers tend to look back for guidance, to things like precedent and legislative history. Bob always looked ahead. He steered by the stars, not by the wake.’’

Born in Boston, Robert Rines grew up in Brookline, the younger of two children born to two lawyers. He began playing violin at 4 and was so good that many friends were certain he would make music his career.

Instead, he graduated from high school early and from the Massachusetts Institute of Technology in 1942 with a bachelor’s in physics. By his college years, he had begun composing; but World War II was raging, and he joined the Army Signal Corps as a radar operator.

While serving, he developed the modulation technique used in the military’s Microwave Early Warning System. After the war, he worked in the federal patent office while getting a law degree at Georgetown University in Washington, D.C. In 1972, he completed a doctorate in microwave technology at Chiao Tung University in Taiwan.

Dr. Rines initially worked with the Boston law practice run by his father, also a patent attorney. In 1963, he founded the Academy of Applied Science, now based in Concord, N.H., to promote innovation and encourage youths to delve into the sciences. He also began teaching, and spent about 40 years in classrooms, mostly at MIT.

Dr. Rines’s sideline of writing music might have blossomed into a career had he not been busy as an inventor and lawyer. “Drum Under the Windows,’’ a musical adaptation drawn from the work of dramatist Sean O’Casey, drew reviews in 1960 such as one in The New York Times that said: “You won’t find anything more eloquent in any theater in town. . . . There is joy in every song.’’

He shared the Emmy Award with Paul Shyre in 1987 for “Hizzoner - The Mayor,’’ a play about New York Mayor Fiorello LaGuardia.

Dr. Rines was married to Carol Williamson, who died in 1993. A couple of years later, he married Joanne Hayes.

“People who would read about him would expect to meet someone who had a great aura about him and maybe was standoffish, unapproachable,’’ his wife said. “He was so far from that. He was one of the most loving and approachable and funny people - and humble. I think when people are really brilliant, they are humbled by the things they don’t know. Even though his accomplishments were amazing, he was still searching.’’

Hutson said there was “a twinkle in his eye and a puckishness in his demeanor that you don’t always see in lawyers.’’

“I think that’s what made him the poet and the composer and the renaissance man that he was,’’ Hutson said. “There were so many facets and sides to Bob Rines that as great a lawyer as he was, and as great an educator, he was more than that. He was fun to be around.’’

A memorial service will be held at 4 p.m. Saturday at the Boston Marriott Long Wharf.

Omission: Because of incomplete information provided to the Globe, Dorothy Kay, the first wife of Dr. Robert H. Rines, was not included in this obituary. Dr. Rines, an inventor, lawyer, and composer, died Sunday. Their marriage ended in divorce, and she died in 1983.