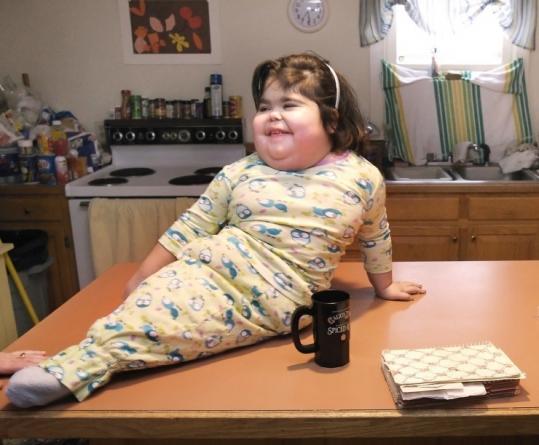 Shiloh Pepin gained a wide following on the Internet and national television after she defied doctors predictions that she would survive only days after her birth. (Gregory Rec/ Portland Press Herald/File 2007 via Associated Press)
By Christopher Girard Globe Correspondent / October 26, 2009

One of Jacqueline A. Kellett’s favorite memories is of her granddaughter Shiloh Jade Pepin insisting on pulling herself up a 13-stair staircase.

Miss Pepin, who was born with fused legs, a rare condition often called “mermaid syndrome,’’ refused Kellett’s offer to help. With characteristic determination, Miss Pepin said: “ ‘No. I’ll do it myself!’ ’’ Kellett recalled. And she did.

She also loved to help at the family’s restaurant, wrapping potatoes for baking. She would settle down on the floor and slog through 90 spuds. Miss Pepin also took pride in leading restaurant patrons to their seats, “scooting’’ along the floor, menus in hand, Kellett said.

Miss Pepin, who gained a wide following on the Internet and national television after she defied doctors predictions that she would survive only days after her birth, died at Maine Medical Center on Friday, said John Lamb, hospital spokesman. She had been hospitalized in critical condition for nearly a week and died from sepsis after battling pneumonia, her grandmother said. She was 10.

Kellett said Miss Pepin viewed herself as normal and even once asked: “When do other people that have two legs get to have one?’’

“She was the most delightful child that God ever put on this earth,’’ Kellett said.

Being born with mermaid syndrome, also known as sirenomelia, meant the Kennebunkport, Maine, girl had only one partially working kidney, no lower colon or genital organs, and legs fused from the waist down.

She could not have surgery to separate her legs, as some children who have survived sirenomelia have done, because blood vessels crossing from side to side in her circulatory system would have been severed. She received two kidney transplants, the last one in 2007.

Her story was featured recently on “The Oprah Winfrey Show,’’ The Learning Channel, and other national television programs.

Earlier this month, her mother, Leslie Kellett Pepin, said Miss Pepin had come down with a cold that quickly turned to pneumonia. Miss Pepin was rushed to Maine Medical Center on Oct. 10, was given antibiotics, and placed a ventilator.

For a while, Leslie Pepin said, things were looking up. “She’s a tough little thing,’’ she said of her daughter last week.

Miss Pepin was a fifth-grader at Kennebunkport Consolidated School.

“She was such a shining personality in that building,’’ said Maureen King, chairwoman of the board of the regional school district. Counselors are being made available this week to talk to students.

“We always knew that the day would come,’’ Kellett said. “It’s just hard it happened so quickly and so soon.’’

Through the television shows, news articles, Facebook, and other websites, Miss Pepin inspired many.

Kellett said Miss Pepin’s family plans to start a foundation in her memory to build handicap-accessible equipment on playgrounds.

A funeral service will be held Wednesday at 11 a.m. in St. David’s Episcopal Church in Kennebunk. Burial will follow in Evergreen Cemetery in West Kennebunk.