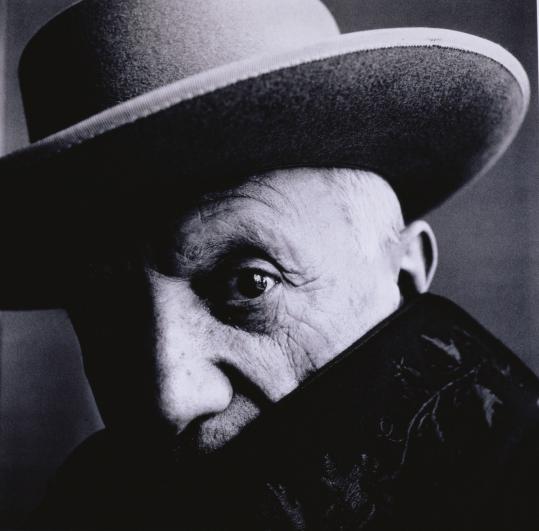 Irving Penn, whose photographs made high art out of high fashion and whose mastery of the medium extended to portraits, still lifes, and nudes, died yesterday at his Manhattan home. He was 92.

His death was announced by his photo assistant Roger Krueger and his brother, film director Arthur Penn. The cause was not given.

The work Mr. Penn did for Vogue in the 1940s and early ‘50s transformed fashion photography. Earlier photographers, such as Baron de Meyer and George Platt Lynes, placed couture in an overstuffed, unreal world. Their fashion photography was as much about decor as design. Mr. Penn’s great contemporary, and sole peer, Richard Avedon, opened up fashion, placing it in natural settings far removed from the studio. Mr. Penn placed it in a stripped-down world of his own making, almost abstract in its rigorous simplicity.

“The calm spareness of his vision and manner in his pictures was breathtaking,’’ John Szarkowski, director of photography at New York’s Museum of Modern Art, once wrote. “Seen against the background of the various trilling, ornamental styles that seemed intrinsic to the very substance of fashion magazines, they seemed to represent a new beginning.’’

With their almost-Euclidean allure, such images as “Black and White Vogue Cover (Jean Patchett),’’ “Large Sleeve (Sunny Hartnett),’’ “Woman with Roses,’’ “Girl with Tobacco on Tongue,’’ and “Girl in a Dior Hat with Martini’’ long ago became emblems of high style and formal grace: “the most beautiful pictures ever made of the most beautiful clothes ever sewn,’’ The New Yorker’s Anthony Lane wrote in 2002.

The work of no other figure in the world of fashion not couturier, not illustrator, not model so clearly demonstrates the designer Coco Chanel’s much-quoted dictum, “Elegance is refusal.’’

Mr. Penn brought a similar sense of restraint to his portraits and achieved similarly spectacular results. In Mr. Penn’s portraiture, the camera offers a cool, even appraisal that neither assaults nor caresses the sitter. “What I really try to do is photograph people at rest, in a state of serenity,’’ he said in a 1977 interview with The New York Times Magazine.

Mr. Penn’s images of Colette, Picasso, S.J. Perelman, and Truman Capote, to cite the best-known examples, are among the most celebrated portraits of the last century. Nor did he limit himself to the famous. For Vogue, Mr. Penn made a remarkable series of portraits of tradesmen butchers, coalmen, glaziers in the early ‘50s. And his epically voluptuous nudes of the late ‘40s are a sort of portrait, albeit of volume rather than personality.

Many of his subjects Mr. Penn literally “cornered’’ in his studio, placing them between two gray walls joined at an acute angle.

“This confinement, surprisingly, seemed to comfort people, soothing them,’’ he explained. “For me the picture possibilities were interesting; limiting the subjects’ movement seemed to relieve me of part of the problem of holding on to them.’’

A notorious perfectionist, Mr. Penn would often sketch a design for a photograph before taking it. He eventually came to employ the palladium platinum process for printing his photographs, a dauntingly exacting technique that produces lustrous, almost painterly results.

Mr. Penn’s passion for control led him, in a sense, to fit the world into his studio. He carried a special portable space, “a luminous tent’’ as Vogue’s Alexander Liberman once called it, on memorable photographic expeditions to Peru, Nepal, Crete, West Africa, Portugal, Morocco, and New Guinea.

At first glance, Andean peasants or New Guinean Mud Men might seem at the furthest possible remove from a Vogue cover model like Lisa Fonssagrives, Mr. Penn’s wife and one of his most famous subjects. Yet it was Mr. Penn’s genius to show that both exemplify the deep human urge to adorn and pose.

By the same token, the astonishing variousness of his still lifes demonstrates the degree to which form trumps content in his art. “Theatre Accident,’’ from 1947, spills out the contents of a chic woman’s purse. “Faucet Dripping Diamonds,’’ from 1963, shows just that: jewels magically emerging from plumbing. Both photographs are in color; and both clearly the work of the same photographer who endowed cigarette butts and street trash with monumental grandeur in a series of black-and-white studies from the 1970s. What they all have in common was, and is, the sensibility of Irving Penn.

Mr. Penn was born in Plainfield, N.J., and grew up in Philadelphia. His father, Harry, was a watchmaker (a pocket watch is the central item in “Theatre Accident’’). His mother, Sonia (Greenberg), was a nurse. Mr. Penn’s younger brother, Arthur, is a noted film and theater director.

As a student at the Philadelphia Museum School of Industrial Design, Mr. Penn studied with the famed Harper’s Bazaar art director Alexey Brodovitch. He worked for Brodovitch at the magazine, then became art director at Saks Fifth Avenue.

Although Mr. Penn started taking photographs in the late ‘30s, his goal was to be a painter. He left Saks in 1942 to spend a year painting in Mexico. Dissatisfied with the results, Mr. Penn moved back to New York to work for Liberman in the Vogue art department. His assignment was to come up with cover designs. When he had difficulty getting photographers to execute his ideas, Liberman suggested Mr. Penn get out his camera and shoot them himself.

After working as an ambulance driver and photographer for the American Field Service at the end of World War II, Mr. Penn returned to New York to take up where he’d left off. He soon became a legendary figure at Vogue. “Everybody including me called him Mr. Penn,’’ Liberman later recalled.

Mr. Penn’s talent was so unmistakable he was allowed to waive the unspoken dress code. He made a uniform of sneakers and jeans. It set him apart in what he called “the strange world of fashion’’ almost as much as did his preference for natural light in his pictures. To get that look, Mr. Penn built a set of tungsten lights to simulate a skylight in his windowless studio. “Using simple equipment and daylight alone is for me a pleasure and a replenishment,’’ he wrote in his 1991 book, “Passage.’’

Any doubts as to Mr. Penn’s preeminence in fashion photography were put to rest by his work in Paris in the early ‘50s. “His shots of the Paris couture in 1950 and 1951,’’ wrote the fashion writer Kennedy Fraser in The (London) Independent in 1992, “are cultural icons. They convey a knowledge of history, composition, and form; a respect for the beauty of women and the expressive quality of dress that has rarely been matched. There’s a feel for the moment that’s almost too intense to bear.’’

Although Mr. Penn focused less on fashion photography as he aged, he never abandoned it. Designers revered his work. “He shows me what I do,’’ Issey Miyake once said, explaining why he prized Mr. Penn’s photographs of his clothes.

Mr. Penn’s photographs are in the permanent collections of numerous institutions, including the Museum of Modern Art, the Smithsonian Institution, the Metropolitan Museum of Art, the Morgan Library, the Getty Museum, and the Art Institute of Chicago.

Besides his brother, Mr. Penn leaves a son, Tom; a stepdaughter, Mia Fonssagrives; and nine grandchildren. His wife died in 1993.

Reports from Globe staff and wires were used in this obituary.