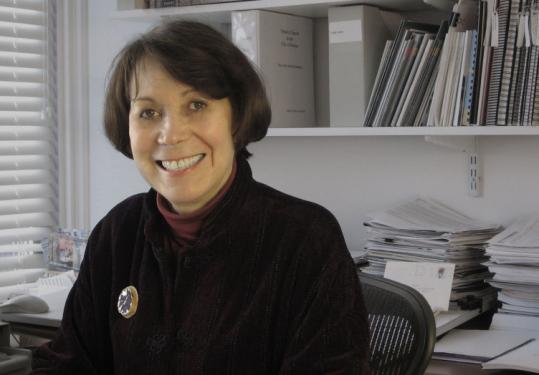 It was at Alhambra Palace in Granada, Spain, that Joan Goody realized she wanted to be an architect. A college student at Cornell, she was doing her junior year abroad in Paris, when she took a side trip to Spain.

She recalled in several interviews: “I first visited the Alhambra on my spring break from Paris in 1955. It was a new revelation about space. An amazing sequence of spaces, the courtyards unfolding into each other. I bought a floor plan as I was leaving, and I realized that I could relive the experience of being there by reading it. This made me want to be an architect.’’

Mrs. Goody became a nationally known architect and a leader in the cultural life of Boston. She died of cancer Sept. 8 in the renovated Beacon Hill carriage house that was her longtime home. She was 73.

Mrs. Goody was the senior member of the Boston firm Goody Clancy, with more than 100 employees, known for its work in city and campus planning and historic preservation, as well as in the architectural design of new buildings.

Mrs. Goody was an important public advocate for good design. For many years, she chaired the Boston Civic Design Commission, which reviews the design of proposed new buildings. In that role, said her partner David Dixon, “she championed humanistic qualities in any new building, above all whether it contributed to Boston’s civility. Civility was a word she liked.’’

In her firm, Mrs. Goody took the lead on a remarkable variety of projects. She listed some favorites in a recent talk with the Globe: the restoration of Trinity Church at Copley Square, including the creation of a major gathering area in a former cramped basement; Harbor Point, where she transformed a dismal public housing project into a mixed-income neighborhood; a federal courthouse in Wheeling, W.Va., where she mixed modern with traditional motifs; the Salomon Center for Teaching at Brown University; and Heaton Court, a small, affordable housing cluster in Stockbridge. More recently, Goody Clancy was selected as lead designer for the conversion of the former St. Elizabeth’s Hospital in Washington into a new headquarters for the Department of Homeland Security.

Joan (Edelman) Goody grew up in a two-family house in the Flatbush neighborhood of Brooklyn. She always credited her years at New York’s Ethical Culture School with fostering self-confidence and creativity. At Cornell, she was a history major who graduated Phi Beta Kappa in 1956.

Marilyn Berger, a Cornell classmate and friend from New York who studied history with her, remembered, “Joan saw every issue three-dimensionally. That was her architect’s imagination.’’

Mrs. Goody often spoke of a class she took on the European novel, taught by famed author Vladimir Nabokov, who, she said, “taught us to read meticulously.’’

After Cornell, Mrs. Goody went on to earn a master’s degree in architecture at Harvard.

In 1960, she married another architect, Marvin Goody, some time after their families suggested that they get together. She joined his small firm as an employee and became a partner in 1968. Marvin Goody was a founder of the Friends of the Public Garden, and when he died in 1980, Mrs. Goody designed a memorial circle in pink granite near the garden path where the couple once walked each morning to their office on Boylston Street.

In 1984, Mrs. Goody married Peter Davison, a poet and editor. They had been introduced by Davison’s wife Jane Truslow not long before she died. An only child, Mrs. Goody took special pleasure in the family that Davison, a widower, brought with him. Her stepdaughter Leslie Davison of West Palm Beach, Fla., recalled: “Joan used to say that she married my father for his children, that she was able to sidestep my brother’s and my adolescence, yet received the gift of becoming a grandmother to four adoring children.’’ Peter Davison died in 2004.

Mrs. Goody loved the islands of Maine, where she and Marvin sailed and built a house. With Davison, she spent weekends on his sheep farm in Gloucester. “She was always seeking a way to get outdoors,’’ said Leslie Davison.

Mrs. Goody’s architecture was usually modest, more concerned with being livable and useful than with catching your eye. “She had nothing but disdain for showy, in-your-face architecture that displayed the designer’s personal whims,’’ said Dixon. “Instead, she believed in translating moral values into buildings. Harbor Point, for example, did more than any other American architecture to create a model for affordable housing, where people of very different incomes and backgrounds live together in a graceful place.’’

Mrs. Goody once told the Globe in 1986, “There is no single genius in the firm. If someone has a better idea, we use it. We’re more collaborative than most. We try to bring up the next generation.’’

Another friend and Cornell classmate, Inger Elliott of New York, said, “There was always a feeling of control with Joan, of ‘This is how I want to do it.’ ’’

She recalled that many years ago, when Elliott, a photographer, was often in dangerous places like Vietnam and Cambodia, she asked Mrs. Goody if it would be all right to say in her will that Mrs. Goody would care for her children if anything happened to her. “Joan said, ‘OK, as long as you also put in that I get your Chinese amah and your washer and dryer.’ ’’

Mrs. Goody was a Fellow of the American Institute of Architects and in 2005 she received the annual Award of Honor for lifetime achievement from the Boston Society of Architects. She taught architectural design at Harvard in the 1970s. In recent years, she was president of Boston’s Saturday Club, a group that meets monthly for lunch and discussion.

Harvard law professor Charles Fried, who will succeed her as president, said, “She was a wonderfully elegant and authoritative and emollient presence in the chair. Everything was done with style. She knew how she wanted the conversation to go, and she guided it with friend- liness, informality, seriousness, and focus.’’

When Mrs. Goody began her career, female architects were a rarity. Her success made her an important role model for younger women. One of them, Andrea Leers of the Boston firm Leers Weinzapfel Associates, recalled: “In 1970, she helped found an advocacy group called WALAP - Women Architects, Landscape Architects and Planners. She was a big sister and guidepost for us who were out there on the edge. She always nourished and supported me. She was constantly the person I would go to for advice in starting my own firm.’’

In addition to her step- daughter, Mrs. Goody leaves a stepson, Angus Davison of Belmont; and four grandchildren.

A private gathering of friends is planned for later this month.