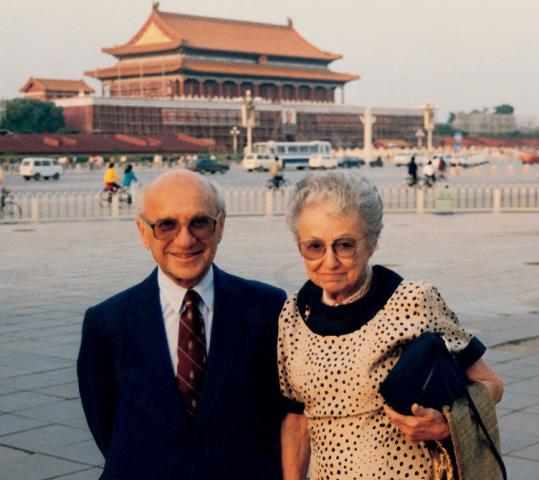 Milton and Rose D. Friedman in China. He â€œalways made me feel that his achievement is my achievement,â€™â€™ she said. (Free To Choose Media)
By Vivien Lou Chen Bloomberg News / August 20, 2009

SAN FRANCISCO - Rose D. Friedman, an economist whose work with her husband, Milton, promoted individual freedom and changed the way central bankers think about money’s role in the economy, has died. She was 97.

She died Tuesday, according to the Cato Institute in Washington, which did not cite a cause. Her husband died in November 2006.

The couple’s 1980 book, “Free to Choose,’’ contended that the government can undermine economic prosperity and that inflation can be produced only by rapid growth in the money supply. In a 2003 speech, Ben Bernanke, now chairman of the Federal Reserve, said “one can hardly overstate’’ the couple’s influence on policy.

Their efforts played a role in decisions that ranged from severing the dollar’s peg to gold in the 1970s to ending the military draft, according to Allan H. Meltzer, economic historian and Carnegie Mellon University professor.

They conceived or improved upon numerous ideas that remain central to public-policy debates, including using vouchers to help parents select the schools their children attend, legalizing drugs, and privatizing Social Security.

“We have had our ups and downs,’’ Rose Friedman said in the couple’s 1998 joint memoir, “Two Lucky People.’’ “Our love and confidence in each other was strengthened and deepened by the downs, as well as by the ups. Our life has surpassed our wildest expectations.’’

Milton Friedman, recipient of the 1976 Nobel Prize in economics, credited his wife with being an active partner in all his work since they met in the early 1930s, according to his autobiography posted online by Nobel organizers.

“I have never had the desire to compete with Milton professionally,’’ Rose once said. “On the other hand, he has always made me feel that his achievement is my achievement.’’

Rose Director was born in December 1911 in a small village that is now part of the Ukraine. At 2, she moved with her mother, sisters, and brothers to Portland, Ore., where her father lived and owned a small general store.

She attended Reed College in Portland before transferring to the University of Chicago, where she met Milton Friedman in an economics class.

“We were married six years later, when our Depression fears of where our livelihood would come from had been dissipated, and, in the words of the fairy tale, have lived happily ever after,’’ Milton Friedman said in his autobiography.

She earned a bachelor of philosophy degree from the University of Chicago and continued to study economics at the school. During her career, she worked on the staffs of the National Resources Committee in Washington, where she studied consumer purchases, and the Federal Deposit Insurance Corp.

She collaborated with her husband on three books, including “Free to Choose,’’ which was made into a broadcast series on public television in the 1980s. The other two are “Capitalism and Freedom,’’ published in 1962, and the 1984 book “Tyranny of the Status Quo.’’

The Friedmans had two children, Janet and David.