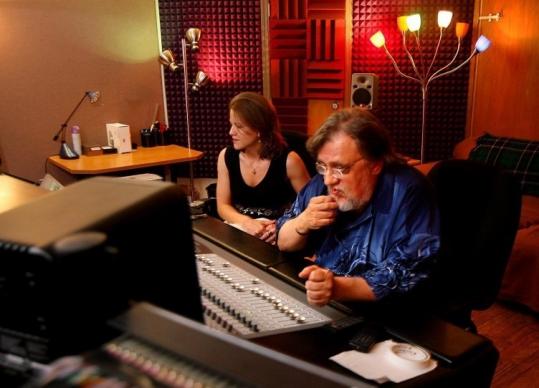 JACKSON, Miss. - Jim Dickinson, a musician and producer who helped shape the Memphis sound in a career that spanned more than four decades, died Saturday. He was 67.

His wife, Mary Lindsay Dickinson, said he died in a Memphis hospital after three months of heart and intestinal bleeding problems. He recently had bypass surgery.

The couple lived in Hernando, Miss.

Mr. Dickinson, perhaps best known as the father of Luther and Cody Dickinson, two-thirds of the Grammy-nominated North Mississippi Allstars, managed an outsider’s career in an insider’s industry. He recorded with and produced such greats as Aretha Franklin, Bob Dylan, Big Star, the Rolling Stones, The Replacements, and Sam & Dave.

His work in the 1960s and ’70s is still influential as young artists rediscover the classic sound of Memphis from that era - a melting pot of rock, pop, blues, country, and rhythm and blues.

“I think he was an incredibly influential individual,’’ Big Star drummer Jody Stephens said. “I think he defined independent spirit in music, and I think that touched a lot of people.’’

Mr. Dickinson’s music was informed by his eclectic and encyclopedic record collection - sold off and rebuilt a few times over the years, usually around Christmas - and his wide array of friends.

“As a producer, it really is all about taste,’’ he said in a 2008 interview. “And I’m not the greatest piano player in the world, but I’ve got damn good taste. I’ll sit down and go taste with anybody.’’

A dabbler in music while in college and later in shows at the famed Overton Park Shell in Memphis, Mr. Dickinson was on his way to becoming “a miserable history teacher.’’ But his wife insisted he focus on his music after watching him play shows with the blues legends of Memphis.

“They were rediscovering Furry Lewis and Sleepy John Estes, Rev. Robert Wilkins, these talents that were like gods,’’ she said in 2008. “They were street sweepers. They were yard men. They had no money, no fame, even though they’d invented this style, this musical style that was changing the world. When I saw what he could do with them - he thought he was gonna be a history teacher - I said, ‘No, no, no, no, let’s try music and see what happens.’ ’’

Mr. Dickinson moved around, traveling with both his own projects and as a sideman until his sons were born. He gave up the road and the lifestyle, built a home studio, and settled in to the hard-scrabble life of the independent producer that he jokingly compared to hustling.

His sense of humor, gift for storytelling, and open door kept musicians filing through his studio and kitchen as his sons grew up. He took an interest in the boys’ music, even drawing Luther and Cody into his own bands. They last released an album together as Jungle Jim and the Voodoo Tiger in 2006.

“Growing up he would play piano and electric guitar and it just always fascinated me, and I always had a little toy guitar of some sort around,’’ Luther Dickinson said in 2008. “And I’ve really been blessed because I always knew what I wanted to do and it was totally because of my dad and his friends.’’

Mr. Dickinson’s career touched on some of the most important music made in the ’60s and ’70s. He recorded the Rolling Stones’ “Wild Horses’’ in Muscle Shoals, Ala.; formed the Atlantic Records house band The Dixie Flyers to record with Franklin and other R&B legends in Miami; inspired a legion of indie rock bands through his work with Big Star; collaborated with Ry Cooder on a number of movie scores, including “Paris, Texas’’; and played with Dylan on his Grammy-winning return to prominence, “Time Out of Mind.’’

He credited his work with Big Star on “Third/Sister Lovers’’ with keeping his tape reels turning over the years, and Stephens found Mr. Dickinson’s fingerprints all over the album when he listened to it recently.

“There’s so many contributions from people that Jim either brought in or helped steer,’’ Stephens said. “And sometimes a brilliant decision is to do nothing, allow space and that sort of thing. His keyboard part in ‘Kizza Me’ is this great fractured piano that kind of cascades, like the piano’s falling down a flight of steps. I think it was all about the spirit and the emotion.’’

“I’m not really a success-oriented person,’’ Mr. Dickinson said. “If you look back at my records that I’ve made as a producer, they’re pretty left-wing. It’s some pretty off-the-wall stuff.’’