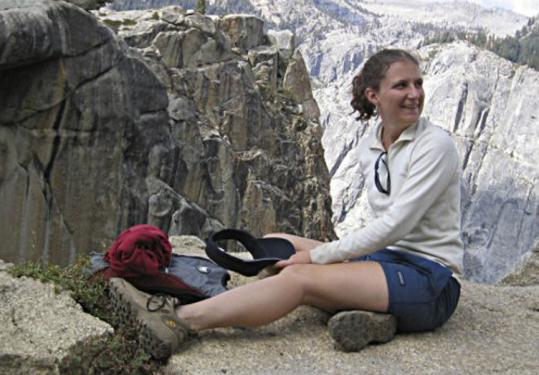 Before beginning graduate school, Cary Girod took a few months off, leaving her job in Boston’s suburbs armed with an itinerary that would keep the less adventurous scrambling to keep up.

“She had powers beyond what some of us had,’’ said her father, Donald of Cattaraugus, N.Y. “She went up Mount Washington with us for the first time when she was 5. I think Cary came with the boldness and adventurousness.’’

Bicyclist, backpacker, and runner, Ms. Girod liked to grow food organically and go out evenings to watch what she called “bands with weird names that my friends know about.’’ For the past year, she taught at Buckingham Browne & Nichols, using humor and wit to show students at the Cambridge private school that mathematics could be quirky and fun.

Ms. Girod was bicycling with her boyfriend, Nils Sorensen, along the Pacific Coast near Raymond, Wash., on July 8 when a van drifted into the shoulder of the road and struck both of them, police told The Daily World, a newspaper in nearby Aberdeen. He was seriously injured, and she died after being taken to Harborview Medical Center in Seattle, her family said. She would have turned 32 today.

“She has this picture on her wall in her entryway,’’ said her brother, Lewis, whose family shared a house in Cambridge with Ms. Girod. “It’s a picture of some graffiti on a sidewalk that says, ‘Smile, life is rad.’ It’s written with spray paint, and she took a picture of it. It’s been on her wall a long time.’’

Few could claim a life as rad as Ms. Girod’s. From teaching math to competing in triathlons, from coaching cross-country runners to schooling students to be more environmentally aware, she covered a lot of ground physically and intellectually.

“She had a really significant impact here, and it went beyond the teaching,’’ said Jack Knapp, Upper School director at Buckingham Browne & Nichols. “She caught the kids’ attention with her commitment to the environment. . . . There was a fascination with life and a social concern about making life on this earth a better one for everybody. She kind of radiated that.’’

The daughter of teachers - Donald and Allison Girod taught math and computer science at colleges in Buffalo - Ms. Girod found her way to the front of the classroom a step at a time, working at Phillips Academy in Andover and at The Lawrenceville School outside Princeton, N.J., before arriving at BB&N last fall.

“She so wanted to just do her very best in terms of doing right for the kids,’’ said Christine Oulton, who chairs the mathematics department in BB&N’s Upper School. “And when things went well for them, she celebrated with them, she was there for them. It wasn’t her and the class, it was a team.’’

Carolyn Marjorie Girod grew up in Tonawanda, a suburb north of Buffalo, where she graduated in 1995 from Kenmore East Senior High School. Four years later, she graduated with honors from the University of Chicago with a bachelor’s degree in mathematics.

A year as a teaching fellow at Phillips Academy convinced her that she wasn’t ready for a career in the classroom, so she spent the next couple of years working as a product development associate at Outside the Classroom, a Newton company that creates alcohol education programs for students.

During summers, she was an assistant hutmaster for the Appalachian Mountain Club, helping run a wilderness hostel in New Hampshire.

Then, she went to the University of New Hampshire, where among other things she studied fire risk and carbon storage in plants. She graduated in 2005 with a master’s degree in natural resources and returned to teaching.

“I’ve watched her teach a couple of times,’’ her father said. “I sat in her classroom at Lawrenceville, and we watched her give a performance like we’ve never done. She was good.’’

He added that his daughter “was understanding; she was patient; she paid attention. She could listen like nobody’s business. When a kid would talk, you could see her focus in, and she could always be nonjudgmental. She was just fantastic as a role model. She was everything you would want your kid’s teacher to be.’’

But New Jersey was too far away from Ms. Girod’s friends in New England, and she wanted to go back to Boston. By this time, her reputation as a teacher preceded her.

“I interviewed Cary, so I recall even the conversations I had with her department chair at Lawrenceville,’’ Oulton said. “He said to me, ‘You want this young woman. No questions asked, you really want to hire her.’ ’’

As a teacher at BB&N, Ms. Girod “liked the quirky things about math, the jokes and the puzzles,’’ Oulton said. “She wasn’t afraid to show a little bit of that geeky side.’’

Indeed, when Ms. Girod posted a profile with an online dating service, she described herself this way: “I am a pint-sized, math-teachin’, outdoorsy gal and I would like to meet an intellectual lumberjack hipster.’’ Emphasis, of course, on “outdoorsy.’’

“At least 90 percent of the days, she biked in to work, no matter the temperature or what was coming down,’’ Oulton said. “I’d drive past her in the pouring rain, and she’d be biking in.’’

In many ways, Ms. Girod’s father and brother said, the past year may have been the best in her life, not least because she got to share a house with her brother, his wife, Sarah Carrier, and their daughter, Ellery.

“She really loved working here,’’ her brother said. “She loved being in Boston. She was with her friends. She was living with me, so we were getting to see each other again. She found this great boyfriend, and they were really well matched, and I think it was going to be permanent. And she really liked the idea of being an aunt.’’

In addition to her parents, brother, and boyfriend, Ms. Girod leaves her grandmother, Marjorie Sutterby of West Seneca, N.Y.

A memorial service will be held at 2 p.m. Saturday in the courtyard of the Buckingham Browne & Nichols campus.