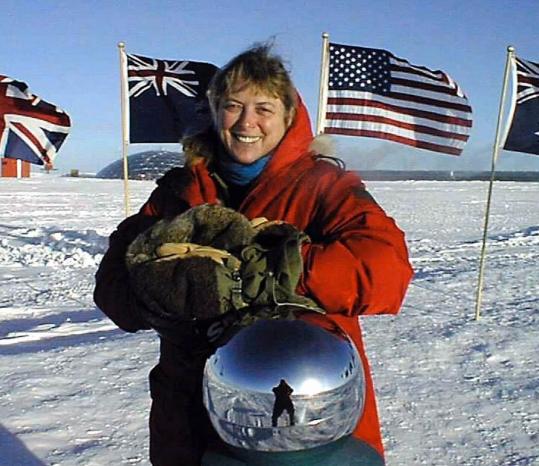 Dr. Jerri Nielsen, shown at the ceremonial South Pole in 1999, died Tuesday in Southwick. Her struggle against breast cancer during a winter at the South Pole captivated the world. (National Science Foundation)
By Bryan Marquard Globe Staff / June 25, 2009
Text size – +

Fresh from a painful divorce and ready for a new chapter in her life, Dr. Jerri Nielsen spotted a want ad for a physician to work at the Amundsen-Scott South Pole Research Station. In Antarctica, she found a peace that had eluded her as an emergency room doctor in her native Ohio.

“Life sang out, and every small breath was a triumph against nothingness,’’ she wrote in “Ice Bound,’’ a 2001 book recounting the experience. “The route to the pole was, after all, an inner journey. Antarctica was a blank slate on which you could write your soul.’’

In March 1999, a couple of weeks after the last plane left before the Antarctic winter settled in, she found a lump in her breast that turned out to be an aggressive cancer. Dr. Nielsen performed a biopsy, then treated herself with supplies dropped from a plane that could not land because of the harsh weather. Finally, as word of her plight spread and the world watched anxiously, she was plucked from the polar ice sheet in a daring rescue flight.

Dr. Nielsen, who had remarried and lived in Southwick in recent years, died in her house Tuesday of complications from cancer that recurred five years after she left Antarctica. She was 57 and had achieved a measure of tranquility, even in the face of death.

Being “on the ice,’’ she told Psychology Today magazine in 2006, after her cancer returned, “created a much greater clarity for me about what was essential in life.’’

Dr. Nielsen’s brother, Eric Cahill, who was her agent after she returned from Antarctica, said that her health had declined rapidly in the past month. Her husband, Tom Fitzgerald, was with her when she died, her brother said.

“She loved life, and she lived it to the fullest,’’ Cahill said. “Even though she died sooner than we would have liked, she lived every day as if it was going to be her last. She squeezed every last drop from life.’’

Though Dr. Nielsen practiced medicine during some of the past several years, she spent much of her time speaking to various organizations around the world and preparing the memoir “Ice Bound: A Doctor’s Incredible Battle for Survival at the South Pole,’’ which she wrote with Maryanne Vollers.

Dr. Nielsen also gave numerous interviews to newspapers, magazines, and television shows. Her book spent 14 weeks on the best-seller list of The New York Times, including two at the top. Susan Sarandon portrayed her in a television movie that aired on CBS in 2003.

At times, the experience was unsettling.

“I didn’t even recognize myself in the movie,’’ Dr. Nielsen told Newsweek in 2003. “Let’s just put it this way: Most people don’t even like looking at snapshots of themselves, let alone an entire television movie based on them.’’

The oldest of three children, she grew up in a rural area outside Salem, Ohio.

Jerri Lin Cahill graduated from Ohio University in Athens in 1974. She received a medical degree from the Medical College of Ohio in Toledo, where she met Jay Nielsen. The two physicians married and had three children, Julia, Benjamin, and Alex, and divorced after more than 20 years.

When Jerri Nielsen’s illness in Antarctica became worldwide news in 1999, her former husband told interviewers that she had walked out on him and their three children.

She gave a different account in “Ice Bound,’’ saying he had been controlling and emotionally abusive.

Jay Nielsen filed a lawsuit in 2002, contending that he had been defamed. Eric Cahill said yesterday that the suit had been settled out of court and added, “He didn’t get much.’’

In interviews, Jerri Nielsen said moving to Antarctica cleared her mind by stripping away the complexities of life.

“I believe in geographic cures,’’ she told Newsweek magazine in 2003.

“They allow you to throw all your cards in the air and see where they land and deal them again. I had just divorced prior to my trip, so I was ready for a new deal. And I found life to be easier at the Pole. There are no phones, no TVs. You don’t shop. There’s no money. Nobody’s really looking for you. It’s a very wonderful life. Sure, there’s calcium depletion, constant hypothermia, lack of oxygen, irregular thyroid function. And worst of all is you completely lose track of time with no sunlight. There is no real future and no real past there. You live every moment.’’

Some of those moments, she conceded, were terrifying. She told “The Early Show’’ on CBS in 2002 that when she learned at the outpost that the tumor was malignant, “I thought I was dead; I just thought, ‘I’m cooked.’ ’’

She wasn’t. Even though she was the only physician at the station, she trained a colleague to be her assistant, performed the biopsy, and kept herself alive through self-administered chemotherapy treatments.

When it was clear she needed more help than she could give herself, an LC-130 from the New York Air National Guard’s 109th Airlift Wing flew in when the temperature rose to minus 58 degrees, just warm enough for a plane to fly. Landing on a runway carved out of the ice, the plane stayed just minutes before leaving with Dr. Nielsen. If the cargo plane had stayed much longer, its fluids would have frozen and the rescuers would have been marooned.

“The things that make you strong and make you feel as though you’ve accomplished something are not the easy ones; it’s the things you had to work and struggle through,’’ she told Psychology Today. “Those are what give us our depth, that make us not just gray and plain and nothing, but give us depth and texture and longing.’’

In addition to her husband, parents, brother, and three children, Dr. Nielsen leaves another brother, Scott Cahill of Richmond.