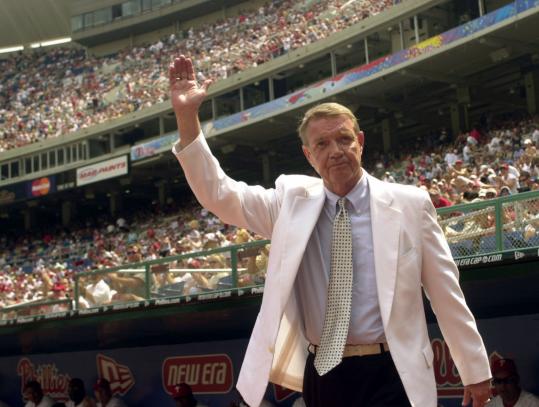 WASHINGTON - Longtime Philadelphia Phillies broadcaster Harry Kalas, whose baritone delivery and signature "Outta here!" home run calls provided the soundtrack to Philadelphia baseball for nearly four decades, died Monday after he was found unconscious in the broadcast booth before a game against the Washington Nationals. He was 73.

"We lost our voice today," team president David Montgomery said, his voice cracking. "He has loved our game and made just a tremendous contribution to our sport and certainly to our organization."

Familiar to millions of sports fans outside Philadelphia for his voiceover work with NFL Films, "Harry the K" was beloved at home. Since 1971, he was the man who was the bearer of news - good and bad - to those who followed the most losing franchise in major professional sports.

When the Phillies won their second World Series title last fall, Mr. Kalas - who normally called only the middle three innings on radio - was in the booth for the last out of the clincher. He then joined the on-field celebration, grabbing a microphone to sing Frank Sinatra's "High Hopes."

That song was among several Kalas standbys that endeared him to Phillies supporters. Another: He would call homers by a certain Hall of Fame third baseman by noting the player's full name - "Michael Jack Schmidt."

Mr. Kalas didn't get to call the final out of Philadelphia's other title, in 1980, because Major League Baseball prevented local broadcasts of the World Series games. But Phillies fans complained and the rule was later changed.

A recipient of the Baseball Hall of Fame's Ford C. Frick Award for his contributions to the game, Mr. Kalas was one of the last longtime announcers closely associated with one city. Another, Vin Scully, threw out the first pitch at the Los Angeles Dodgers' home opener Monday marking his own 60th year with that club.

"He was not only a multitalented fellow with a wonderful voice. He was a lovely guy. I mean, everybody liked Harry. The city of Philadelphia will just be in mourning because they loved him so much," Scully said. "I'm happy for him that his team was world champions last year, so he had the thrill of that."

To a whole generation of football fans, Mr. Kalas also was a signature figure.

"In many ways, Harry is the narrator of our memories. His voice lives on not only on film, but inside the heads of everyone who has watched and listened to NFL Films."

The Phillies taped up a color photo of their broadcaster inside the dugout Monday, with the words "Harry Kalas 1936-2009" written underneath. When Philadelphia's Shane Victorino homered in the third inning, he paused after touching home plate, crossed himself, and pointed with his index finger toward the broadcast booth, where Mr. Kalas would have been working at Nationals Park.

Shortly after noon Monday, Mr. Kalas was in the visiting clubhouse at Nationals Park, jotting down the Phillies' lineup so he'd be ready to call the game. About half an hour later, he was discovered in the booth by the Phillies director of broadcasting. He was taken to a local hospital, where he was pronounced dead, the Phillies said.

Mr. Kalas fell in love with baseball at a young age, when his father took him to Comiskey Park to see the Chicago White Sox play the Washington Senators. It was a rainy night, and Mr. Kalas sat with his dad behind the Washington dugout.

"Because of the rains, the field was covered," he once said. "There was no batting practice, so the players really didn't have anything to do. Mickey Vernon popped out of the dugout, saw this wide-eyed kid - me - picked me up, took me in the dugout, gave me a baseball, introduced me to his teammates, and thus began my love of baseball."

Mr. Kalas was a member of the Houston Astros' broadcast team from 1965 to 1970 before joining the Phillies.

Phillies radio broadcaster Larry Andersen - who worked with Mr. Kalas in the booth after being a Philadelphia pitcher - spoke about his partner.

"He found the good in everybody, especially the players," said Andersen, with tears streaming down his cheeks. "He loved the players. He loved being around them."