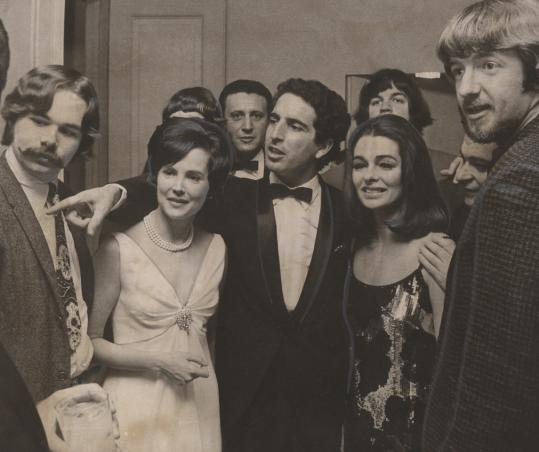 Algerian ambassador Cherif Guellal (center) greeted guests at a dinner and dance in 1966. Yolande Fox, to his right, was his longtime companion and a former Miss America. (Washington Post/File)
By Adam Bernstein The Washington Post / April 13, 2009
Text size – +

WASHINGTON - Cherif Guellal, an Algerian resistance fighter, businessman, and diplomat who cut a glamorous figure in Washington society and was the longtime companion of a former Miss America, died of leukemia April 7 at a hospital in Algiers. He was 76.

Mr. Guellal was a veteran of the bloody independence movement that in 1962 secured freedom from French rule for his north African country. After serving as a top lieutenant to Ahmed Ben Bella, the rebel leader-turned-president, Mr. Guellal arrived in Washington as postcolonial Algeria's first ambassador to the United States.

His dark good looks enhanced his popularity at soirees and made him a compelling presence at academic gatherings. "We wish to be masters in our own house and not junior partners of the great powers," he said at a 1964 meeting of US political and social scientists, describing the Algerian drive toward independence.

Mr. Guellal told President Lyndon Johnson that he hoped relations would improve between the two countries.

It was a union born of oil money, from Johnson's native Texas and the petrol-rich states of the Arab world, wrote society host-turned-writer Barbara Howar in her 1973 memoir "Laughing All the Way."

In her book, Howar called Mr. Guellal a "handsome and brilliant young freedom fighter" and a "roving intellectual" who became much in demand among the Embassy Row elite and local society "Swing Set."

His constant companion was Yolande Fox, the Alabama-born Miss America of 1951 and the widow of a movie and TV executive.

Compared with others, Howar wrote, Mr. Guellal "entertained less often and less lavishly but in a certain swashbuckling style that drew together the keener political minds, celebrated academicians, international radicals, and show-biz luminaries who were the residuals of Mrs. Fox's years of salon-keeping in New York and Los Angeles."

The 1967 Arab-Israeli War severed diplomatic ties between the United States and Algeria and ended Mr. Guellal's term as ambassador.

He remained Algeria's unofficial representative in Washington while shuttling among homes in Georgetown, Algiers, and Paris and consulting for US companies hoping to conduct business in the Arab world.

He became a representative of the state-owned energy company Sonatrach, which played a crucial role helping meet demands during the world oil crisis of the 1970s.

At the same time, he conducted extensive research into the life of Frantz Fanon, whose polemic "The Wretched of the Earth" advocated violent revolution in colonized Third World states.

Cherif Ali Guellal, a doctor's son, was born in Constantine, in eastern Algeria.

His mother, Fatima, became a leader in anti-French resistance groups.

She was imprisoned and tortured by the French, as were many other members of the family.

Mr. Guellal graduated in 1956 from a university in Aix-en-Provence, France, before joining the Algerian provisional government in exile.

He mostly worked from India for the independence movement, trying to build international support for the resistance, before winning his appointment to Washington.

In the capital, he successfully fought to remove a racially restrictive covenant on the new ambassadorial residence.

Mr. Guellal and Fox never married, but they considered themselves to be spouses, and he helped raise her daughter. Fox lives in Washington, along with her daughter, Dolly Fox of New York and Washington, Mr. Guellal also leaves three brothers and a granddaughter.