Janet Jagan; US native succeeded spouse as president of Guyana 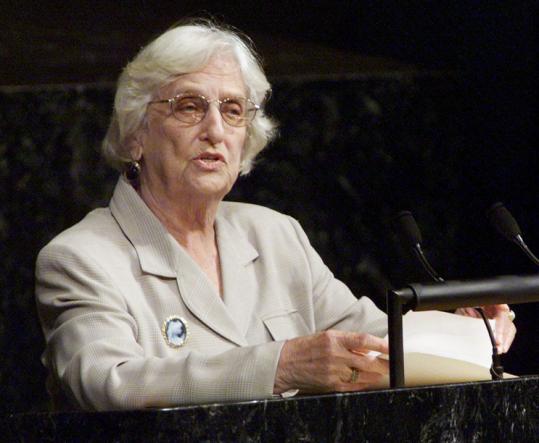 When she took office after her husband's death, Ms. Jagan, an avowed communist, had lived in Guyana more than 50 years. (Timothy A. Clary/ Getty Images)
Associated Press / March 30, 2009
Text size – +

Ms. Jagan, a Jewish woman and a naturalized Guyanese, was elected president of the English-speaking South American country in December 1997, succeeding her husband, Cheddi Jagan, who died earlier that year.

At 77, she was the first white president of a country whose politics are polarized between its majority Guyanese of Indian descent - the backbone of her ruling party - and Afro-Guyanese, supporters of the opposition People's National Congress.

"My husband told me I should take over should anything happen to him," she told a reporter while contemplating her presidential run.

Opposition leaders repeatedly accused her government of racism and took to the streets in protest. Ms. Jagan, in turn, claimed the opposition was trying to destabilize her government.

Citing reduced energy and stamina after suffering a heart attack, Ms. Jagan stepped down in August 1999, less than two years after taking office.

Ms. Jagan had lived in the former British Guiana, situated on the Caribbean in northern South America, since 1943. She met her husband in Chicago, where he was a dentist studying for his doctorate at Northwestern University. She was his assistant.

After they moved to his native Guyana, both hardline communists became active in politics. British and American administrations blocked Cheddi Jagan from power for decades, alarmed by his ties to Cuba and Moscow. She endured three years of house arrest and five months in jail with her husband in the 1950s, when he first won an election.

Cheddi Jagan got to rule in 1992 but died before his term was out.