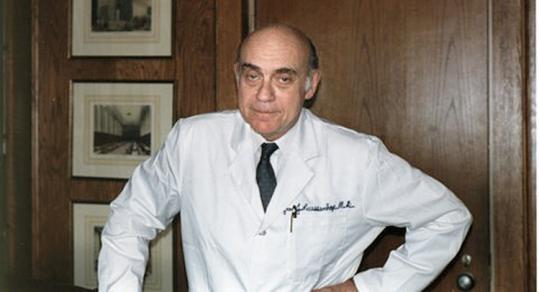 In 1960, Dr. Luessenhop, with fellow Georgetown neurosurgeon William T. Spence, pioneered a procedure in which he was able to slow the dangerous flow of blood from an enlarged artery by using a handmade plastic pellet. The lifesaving procedure, a new approach to the treatment of aneurysms and certain brain abnormalities, is now considered the beginning of intravascular surgery.

And in December 1986, Dr. Luessenhop led the neurosurgery team that, in a five-hour surgery, removed a cancerous tumor from CIA Director William J. Casey's brain five months before he died.

Dr. Luessenhop became chief of neurosurgery at Georgetown at 36 and held the post for 34 years, until he retired in 1993. During that time, he commissioned the design and development of the first whole-body CT scanner from another Georgetown colleague, Robert Ledley.

Born in Chicago, Dr. Luessenhop grew up in Westfield, N.J., and served in the Army in Europe during World War II as a medical technician. After the war, he graduated from Yale University and from Harvard University medical school in 1952.

Dr. Luessenhop spent a year as a surgical intern at the University of Chicago and then entered the residency training program in neurological surgery at Massachusetts General Hospital. During his final year, he was appointed as a teaching fellow in surgery at Harvard.

After completing the residency program in June 1959, Dr. Luessenhop became a visiting scientist at the National Institutes of Health and simultaneously began clinical practice at Georgetown. He joined Georgetown full time in 1962.

His marriage to Elizabeth Connell Luessenhop ended in divorce.

He leaves his wife of 21 years, Frances Luessenhop of Bonita Springs, Fla.; four children from his first marriage, Cynthia Davison of Atlanta, Constance Bruce of Ithaca, N.Y., A. John Luessenhop Jr. of Round Hill, Va., and Charles Luessenhop of Reston, Va.; two stepdaughters, Suzanne Brockman of Baltimore and Laura Cowan of Washington; and nine grandchildren.