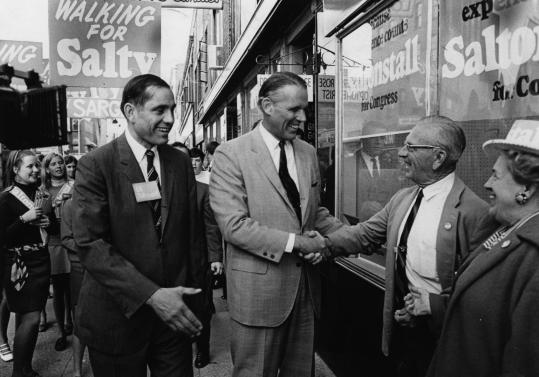 Herbert Capwell/Globe staff/FileWilliam L. Saltonstall (left) campaigned for Congress with Governor Francis W. Sargent in Haverhill in 1969. Below, Mr. Saltonstall was visited by his father, Leverett, a former Massachusetts governor and US senator, at the state Senate in 1978. The family traces its Massachusetts roots to 1630, when Sir Richard Saltonstall settled in Salem, and then helped found Watertown. (Herbert Capwell/Globe staff/File)
By Matt Collette Globe Correspondent / January 25, 2009
Text size – +

William L. Saltonstall was kind, and honest, and generous. And his integrity was second to none, said Sam Adams, who was a friend since the two were students at Harvard. "It's a lot of clichés there, but it's true. It's all true," he said.

Mr. Saltonstall, who was the son of Leverett Saltonstall, Republican Massachusetts governor and United States senator, served as a state senator for 12 years, from 1966 to 1978. His family traces its Massachusetts roots to 1630, when Sir Richard Saltonstall settled in Salem, then helped found Watertown.

Mr. Saltonstall died Friday night of an apparent heart attack or blood clot at his Manchester-by-the-Sea home, according to his wife, Jane. The couple had just returned from a dinner out, she said. He was 81.

He enjoyed talking to strangers and friends alike, always willing to engage in conversations.

"To every person he ever met, he was as much a man of the people as he was to the society to which he was born," said Adele Q. Ervin, one of Mr. Saltonstall's lifelong friends.

Military service was common for Saltonstall men, and Mr. Saltonstall joined the armed services the day he turned 18.

He bucked family trends, joining the Navy instead of the Army, the family's traditional route. He was put on a waiting list for boot camp, and his first day in the Navy was V-J day.

He spent his Navy career as quartermaster on a tugboat based in Newfoundland.

Mr. Saltonstall's brother, Peter, was killed by a Japanese sniper in Guam.

After the war, Mr. Saltonstall enrolled at Harvard, graduating in 1949.

He met his wife, Jane (Chandler), at the wedding of mutual friend. She caught the bride's bouquet, and the couple was married two years later, in April 1953.

Mr. Saltonstall worked as a securities analyst, then spent seven years as his father's executive secretary in Washington. In 1966, he returned to the Commonwealth to run for a seat in the State Senate.

Part of his campaign involved "Walk for Salty" events, where Mr. Saltonstall and supporters walked from rally to rally, and door to door, to raise support. He ran on his experience as a legislator and politician, but at the time said he lost because of Harrington's call for a quicker end to the Vietnam War than Mr. Saltonstall was advocating.

One of the issues Mr. Saltonstall championed as a state senator was bicycle safety and in 1973, he introduced legislation that required drivers to pass cyclists at a reasonable distance and speed.

The following year, his 16-year-old daughter, Claire, died on Martha's Vineyard when a car veered off the road and struck her as she rode her bicycle.

"That was a tremendous loss for them," said Ervin.

"The fellow who was driving never sought to apologize," Adams said. "And someone said [to Mr. Saltonstall] that there's a fear in Massachusetts law that if you apologize, you're admitting guilt, and that could make someone liable in a civil suit."

Mr. Saltonstall drafted legislation that kept private apologies from becoming evidence in civil lawsuits. It was soon passed into law.

Four years later, Mr. Saltonstall called an 8 a.m. press conference at his house, where he announced he was not going to seek reelection to the State Senate. The event was conducted in the kitchen, and his wife served scrambled eggs to reporters.

He cited "family issues," but news reports at the time suggested Mr. Saltonstall chose to exit the public stage so he would not be required to disclose details of the family's trust, which would have been required under newly passed ethics legislation.

"One of the things he did - every town meeting, right at the beginning - he stood up and made a motion to thank all the town committees that worked without pay," Adams said. "That was well-received, it was one of the gracious things he did."

State Senator Bruce Tarr who holds the same seat Mr. Saltonstall once did, said he considers him a mentor.

"In the era where there is always a cynicism [directed at politics], he reminded people that there was value."

He was generous with his wealth, and made financial contributions without seeking attention, said Ervin, who said she suspected much of his philanthropy was anonymous.

Ervin said Tufts Medical Center was planning to recognize Mr. Saltonstall, a former chairman of the hospital's Board of Governors, next month.

"He didn't know it," she said. "They didn't tell him, because he wouldn't have wanted it. He would have tried to stop it."

In addition to his wife, Mr. Saltonstall leaves a daughter, Abigail of Palmer, Alaska, a son, William Jr. of Anchorage, Alaska, five grandchildren, and eight great-grandchildren.