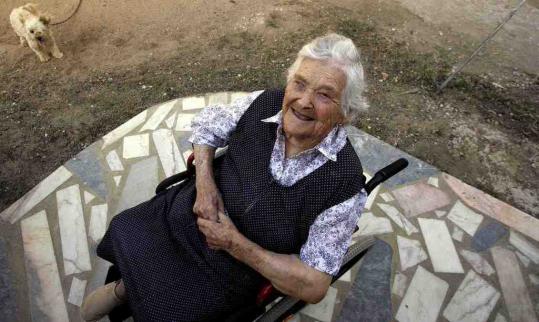 LISBON - A Portuguese woman who lived to see five of her great-great grandchildren born and was believed to have been the world's oldest person died Friday at the age of 115, officials said.

She had been listed by the Guinness Book of World Records as the world's oldest person. That title now falls to an American, 114-year-old Gertrude Baines, who lives in a Los Angeles nursing home.

On Friday, she ate breakfast normally, but then was taken to hospital because of a swelling, her daughter Maria Madalena told state news agency Lusa, without elaborating.

"I regret the death of this lady, she really was the sweetest person," said town councilor Ivo Santos in Tomar, 84 miles north of Lisbon.

There are now 82 women and nine men verified as being 110 or older, according to gerontologist Dr. Stephen Coles of the Gerontology Research Group at the University of California, Los Angeles.

But he said there could be hundreds more in places such as China, India, or Africa where they would not have caught the attention of the Gerontology Research Group, a small volunteer organization that tracks supercentenarians and verifies their birth dates through birth certificates and other documents.