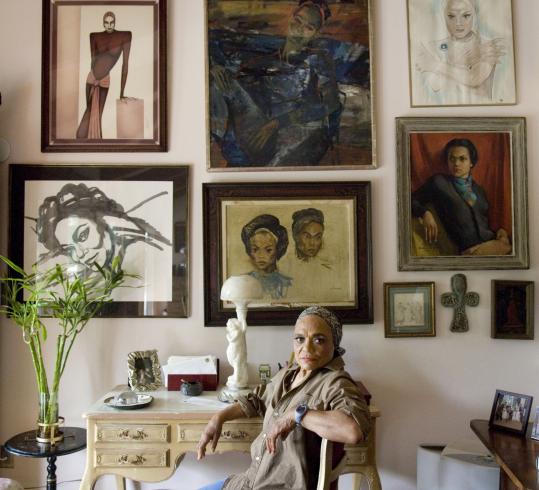 Eartha Kitt, shown at her Weston, Conn., home with portraits done of her over the years, had a career that lasted more than six decades. She did films, such as ''St. Louis Blues'' with Nat King Cole (below left), but her biggest musical hit was ''Santa Baby.'' (The Boston Globe/File 2005)
By Rob Hoerberger New York Times News Service / December 26, 2008
Text size – +

NEW YORK - Eartha Kitt, who purred and pounced her way across Broadway stages, recording studios, and movie and television screens in a show business career that lasted more than six decades, died yesterday. She was 81 and lived in Connecticut.

The cause was colon cancer, said her longtime publicist, Andrew E. Freedman.

Ms. Kitt, who began performing as a dancer in New York in the late 1940s, went on to achieve success and acclaim in a variety of mediums long before other entertainment multitaskers like Julie Andrews, Barbra Streisand, and Bette Midler. With her curvaceous frame and unabashed vocal come-ons, she was also, along with Lena Horne, among the first widely known African-American sex symbols. Orson Welles famously proclaimed her "the most exciting woman alive" in the early 1950s, apparently just after that excitement prompted him to bite her onstage during a performance of "Time Runs," an adaptation of "Faust" in which Ms. Kitt played Helen of Troy.

Ms. Kitt's career-long persona, that of the seen-it-all sybarite, was set when she performed in Paris cabarets in her early 20s, singing songs that became her signatures like "C'est Si Bon" and "Love for Sale." Returning to New York, she was cast on Broadway in "New Faces of 1952" and added another jewel to her vocal crown, "Monotonous" ("Traffic has been known to stop for me/Prices even rise and drop for me/Harry S. Truman plays bop for me/Monotonous, monotone-ous"). Brooks Atkinson wrote in The New York Times in May 1952, "Eartha Kitt not only looks incendiary, but she can make a song burst into flame."

Shortly after that run, Ms. Kitt had her first best-selling albums and recorded her biggest hit, "Santa Baby," whose precise, come-hither diction and vaguely foreign inflections proved that a vocal sizzle could be just as powerful as a bonfire. Though her record sales fell after the rise of rhythm and blues and rock 'n' roll in the 1950s, her singing style would later be the template for other singers with small-but-sensual voices like Diana Ross (who has said she patterned her Supremes sound and look largely after Ms. Kitt), Janet Jackson, and Madonna, who recorded a cover version of "Santa Baby" in 1987.

Ms. Kitt would later call herself "the original material girl," a reference not only to her stage creation but also to her string of romances with rich or famous men, including Welles, the cosmetics magnate Charles Revson, and the banking heir John Barry Ryan III. She was married to Bill McDonald, a real estate developer, from 1960 to 1965; their daughter, Kitt Shapiro, survives her, as do two grandchildren.

From practically the beginning of her career, as critics gushed over Ms. Kitt, they also began to describe her in every feline term imaginable: Her voice "purred" or "was like catnip"; she was a "sex kitten" who "slinked" or was "on the prowl" across the stage, sometimes "flashing her claws." Her career has often been said to have had "nine lives." Appropriately enough, she was tapped to play Catwoman in the 1960s TV series "Batman," taking over the role from the leggier, lynxlike Julie Newmar and bringing to it a more feral, compact energy.

Yet for all the camp appeal and sexually charged hauteur of Ms. Kitt's cabaret act, she also played serious roles, appearing in the films "The Mark of the Hawk" with Sidney Poitier (1957), "St. Louis Blues" with Nat King Cole (1958), and "Anna Lucasta" (1959) with Sammy Davis Jr. She made numerous television appearances, including a guest spot on "I Spy" in 1965, which brought her her first Emmy nomination.

For these performances Ms. Kitt might have drawn on the hardship of her early life. She was born Eartha Mae Keith in North, S.C., on Jan. 17, 1927, a date she did not know until about 10 years ago, when she challenged students at Benedict College in Columbia, S.C., to find her birth certificate, and they did. She was the illegitimate child of a black Cherokee sharecropper mother and a white man about whom Ms. Kitt knew little. She worked in cotton fields and lived with a black family who, she said, abused her because she looked too white. "They called me yella gal," Ms. Kitt said.

At 8 she was sent to live in Harlem with an aunt, Marnie Kitt, who Ms. Kitt came to believe was really her biological mother. Though she was given piano and dance lessons, a pattern of abuse developed there as well: Ms. Kitt would be beaten, run away, and return. By her early teenage years she was working in a factory and sleeping in subways and on the roofs of unlocked buildings. (She would later become an advocate, through UNICEF, on behalf of homeless children.)

Her show business break came on a lark, when a friend dared her to audition for the Katherine Dunham Dance Company. She passed the audition and permanently escaped the cycle of poverty and abuse that defined her life until then.

But she took the steeliness with her, in a willful, outspoken manner that mostly served her career, except once. In 1968 she was invited to a White House luncheon and was asked by Lady Bird Johnson about the Vietnam War. She replied: "You send the best of this country off to be shot and maimed. No wonder the kids rebel and take pot." The remark reportedly caused Johnson to burst into tears and led to the only derailment in Ms. Kitt's career. (Ms. Kitt contended that the CIA drafted a negative memo that referred to her as a nymphomaniac.)

As bookings dried up she was exiled to Europe for almost a decade. But President Carter invited her back to the White House, and she earned her first Tony nomination for her work in "Timbuktu!," an all-black remake of "Kismet," in 1978.

By now a diva and legend, Ms. Kitt did what many other divas and legends - Shirley Bassey and Ethel Merman among them - did: She dabbled in dance music, scoring her biggest hit in 30 years with "Where Is My Man" in 1984, the same year she was roundly criticized for touring South Africa. Ms. Kitt was typically unapologetic; the tour, she said, played to integrated audiences and helped build schools for black children.

The third of her three autobiographies, "I'm Still Here: Confessions of a Sex Kitten," was published in 1989, and she earned a Grammy nomination for "Back in Business," a collection of cabaret songs released in 1994.

As Ms. Kitt began the sixth decade of her career, she was as active as ever. In 2000 she received her second Tony nomination, for best featured actress in a musical in "The Wild Party." Branching out into children's programming, she won two daytime Emmy Awards, this year and in 2007, as outstanding performer in an animated program for her role as the scheming empress-wannabe Yzma in "The Emperor's New School." And all the while she remained a fixture on the cabaret circuit, having maintained her voice and shapely figure through a vigorous fitness regimen that included daily running and weightlifting. Even after discovering in 2006 that she had colon cancer, she triumphantly opened the newly renovated Cafe Carlyle in New York in September 2007. Stephen Holden, writing in The Times, said that Ms. Kitt's voice was "in full growl."

But though Ms. Kitt still seemed to have men of all ages wrapped around her fingers (she would often toy with younger worshipers at her shows by suggesting they introduce her to their fathers), the years had given her perspective. "I'm a dirt person," she told Ebony magazine in 1993. "I trust the dirt. I don't trust diamonds and gold."