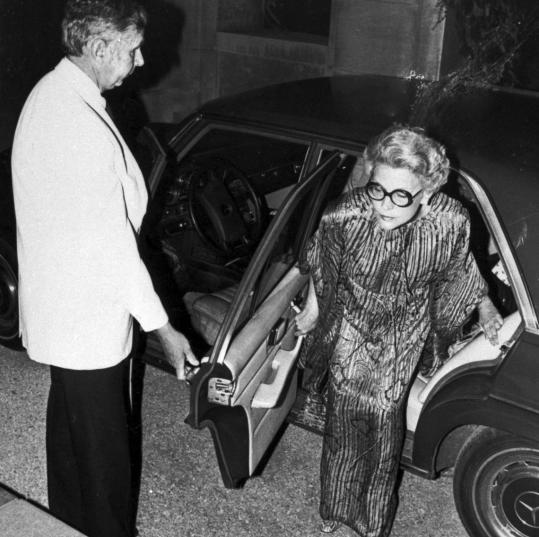 Martha ''Sunny'' von Bulow in Providence. The heiress had been in a coma for the past 28 years after what prosecutors say were two murder attempts by her husband, Claus von Bulow. (Providence Journal via Associated Press/File)
By Enid Nemy New York Times / December 7, 2008
Text size – +

NEW YORK - Martha "Sunny" von Bulow, the American heiress who was first married to an Austrian playboy prince and then to a Danish-born man-about-society who was twice tried on charges of attempting to murder her, died yesterday at a nursing home in Manhattan.

Maureen Connelly, a spokeswoman for the family, confirmed the death. Mrs. Von Bulow's three children said in a statement that they "were blessed to have an extraordinary loving and caring mother."

In her long, silent years at the Milstein Building at New York-Presbyterian/Columbia hospital and then at the nursing home on the Upper East Side, doctors said Mrs. von Bulow never showed any signs of brain activity; she was fed through a tube in her stomach.

Yet there were always fresh flowers in her room, and photographs of her children and grandchildren sat on a bedside table. She was attended by private nurses, and her room, for some time, was guarded by private security personnel.

Her second husband, Claus von Bulow, was convicted and later acquitted of twice trying to kill her with injections of insulin so as to aggravate her hypoglycemia, a low blood sugar condition.

His trials were among the most sensational of the 1980s. The news media from around the world were irresistibly drawn to the drama of the beautiful heiress who lay in a twilight zone, the debonair husband accused of attempted murder, two royal children pitted against their younger stepsister, and the glittering social milieus of Newport and New York providing the backdrop.

Hollywood, too, could not resist. The trials became the subject of the 1990 movie "Reversal of Fortune" with Glenn Close as Sunny von Bulow and Jeremy Irons as Claus von Bulow. The film was based on a book by Alan M. Dershowitz, the Harvard law professor who had been Claus von Bulow's lawyer during his appeal.

The prosecutions were the result of an investigation initiated at the time by Alexander von Auersperg and his sister Annie-Laurie "Ala" von Auersperg Kneissl, the children from Sunny von Bulow's marriage to Prince Alfred von Auersperg.

The accusations pitted the von Auerspergs against their stepfather and their half sister, Cosima von Bulow, and divided the loyalty of friends in Newport and New York.

In his first trial, in Newport in 1982, Claus von Bulow was found guilty of twice trying to kill his wife and sentenced to 30 years in prison. He appealed and posted a $1 million bond believed to have been put up by his friend J. Paul Getty Jr., the oil tycoon.

The appeal was guided by Dershowitz, working with, among others, a team of Harvard students, and the conviction was overturned on the grounds that certain information had not been made available to the defense and that there had been no search warrant when pills were confiscated and sent for testing.

Claus von Bulow was acquitted in 1985 after a second trial in Providence, where his chief defense counsel was Thomas P. Puccio.

A $56 million civil suit filed against Claus von Bulow by his stepchildren was settled in 1987 with the stipulation that he agree to a divorce and not discuss the case publicly.

The divorce was granted in 1988. Claus von Bulow now lives in London.

A principal prosecution witness at the trials, Maria Schrallhammer, Sunny von Bulow's longtime maid, testified that shortly before Christmas 1979, she became worried when Claus von Bulow refused to call a doctor as his wife, moaning behind a locked door, sank into a coma. Von Bulow said he thought his wife was sleeping.

Mrs. von Bulow eventually recovered at Newport Hospital, where tests indicated a high level of insulin. A few months later, the maid said, she found in Claus von Bulow's closet a small black bag containing syringes, yellow paste, and white powder. She said she had passed these on to Ala von Auersperg, who had the family physician analyze the contents.

The substances were determined to be Seconal and a paste form of Valium. Schrallhammer said that she kept an eye on the bag and that some months later found insulin in it.

Shortly afterward, an investigator working on behalf of the two older children searched the house and found a black bag said to contain three hypodermic needles, one with traces of a sedative and insulin.

Mrs. von Bulow, who had inherited $75 million, was depicted by the defense as a reticent woman who drowned her insecurities in alcohol and was familiar with drugs.

The von Auersperg children, backed by Schrallhammer, claimed that Mrs. von Bulow needed as little as two drinks to appear that she had had too much.

The prosecution put Alexandra Isles, a socialite and former actress who had been Claus von Bulow's mistress, on the stand to admit that she had given her lover an ultimatum about dissolving his marriage.

It was noted, too, that a divorce would have voided the $14 million that von Bulow would have inherited under his wife's will and left him with an annual income of $120,000 from a trust established by Mrs. von Bulow.

Claus Von Bulow acknowledged that he and his wife had discussed divorce but denied that the issue was another woman. He initiated the talks, he said, because he wished to return to work and his wife did not agree. He had been working intermittingly as a broker in an investment firm.

Sunny von Bulow, the former Martha Sharp Crawford, was born in Manassas, Va., on Sept. 1, 1931, the only child of Annie-Laurie and George W. Crawford, a former chairman of Columbia Gas and Electric Co. of Pittsburgh, who died in 1935.

Annie-Laurie Crawford, the daughter of Robert Warmack, founder of International Shoe Co., was remarried in 1957 to Russell Aitken, a sculptor. She died in 1984, leaving an estate estimated at $100 million.

Her daughter was originally nicknamed Choo-Choo because she was born on her father's railway car, and later called Sunny.

She attended the Chapin School in Manhattan and St. Timothy's School in Maryland, and she had an elaborate debut in 1949. She was 24 when, in 1957, she married Prince Alfred von Auersperg, a 20-year-old tennis pro at the exclusive Schloss Mittersell in Austria.

Although the marriage took place at a time when some mothers of American heiresses encouraged their daughters to marry titled Europeans, Crawford was not one of them.

Crawford liked the prince, she said, but told friends that she wanted her daughter to marry an American - "the boy next door." Some friends, aware of the girl's shyness, also discouraged the romance, to no avail.

The couple settled in Munich and later in Kitzbuhel, Austria. Ala von Auersperg was born in 1958 and Alexander the following year. The marriage ended in divorce in 1965.

The princess had few interests in common with her husband, did not share his ardor for big-game hunting in Africa, and disliked his flirting. She also missed the United States. The prince received $1 million and two houses in a settlement.

In 1983, von Auersperg lapsed into an irreversible coma after an automobile accident in Austria. He died in 1992.

The year after her divorce, the princess married Claus von Bulow, whom she had met years earlier in London.

He was originally neither a von nor a Bulow. His mother was divorced from his father, Svend Borberg, a playwright and drama critic who was convicted of collaborating with the Nazis by a Danish court after the war. He was sentenced to four years in prison, released after 18 months, and died shortly after.

Claus grew up with his mother and maternal grandfather, Frits Bulow, a former minister of justice in Denmark and a successful businessman. Claus adopted the name and added "von" as a young adult.

At the time of his marriage, von Bulow was a senior aide to Getty.

The couple settled in an imposing Fifth Avenue apartment facing Central Park. A short time later, following the lead of her mother, Sunny von Bulow acquired a Newport estate, Clarendon Court, a 23-room Georgian mansion on 10 acres overlooking the sea. Mrs. von Bulow had the huge lawn lowered 17 feet to improve the view of the ocean.

The house had been the setting for the 1956 musical "High Society," starring Grace Kelly, Frank Sinatra, and Bing Crosby.

The property was sold in 1988 for $4.2 million; the same year, an auction of von Bulow furniture, paintings, porcelains, and silver brought more than $11.5 million.

A daughter, Cosima, was born in 1967, and the three siblings apparently got along well until their mother's comas aroused the suspicions of the von Auersperg children. Cosima von Bulow supported her father during his trials and as a result was cut out of her maternal grandmother's will.

When Mrs. Aitken died in 1984, Cosima von Bulow filed suit, claiming that family members had turned her grandmother against her. In a 1987 settlement, Claus von Bulow renounced all his claims to his wife's fortune in return for his daughter's receiving a share of Aitken's estate, equal to those of her half sister and half brother.

The author Dominick Dunne wrote about the case and had known Sunny von Bulow since she was an 18-year-old debutante. He said yesterday that she had been portrayed unfairly in the film as an emotionally frail alcoholic.

Rather, he said, she was a "beautiful and shy" woman who "really did not like the social life, although she was totally associated with the social life."