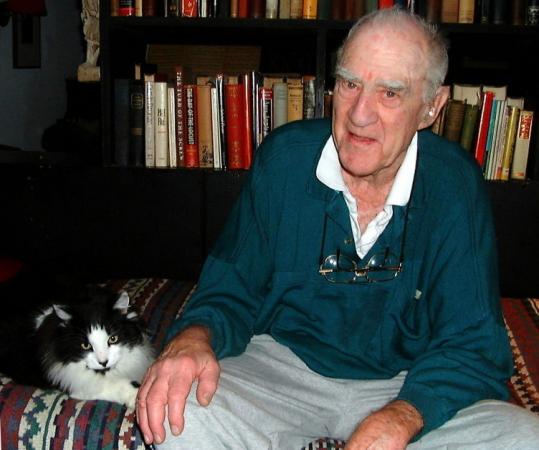 WASHINGTON - William Gibson, 94, a Tony Award-winning playwright best known for "The Miracle Worker," the inspirational story of Helen Keller and her teacher Anne Sullivan, died Tuesday at his home in Stockbridge, Mass.

The family did not disclose the cause of death.

Mr. Gibson, whose work appeared on Broadway for five decades, was known for the demanding roles he wrote for women. Working frequently with director Arthur Penn, he helped make a star of actress Anne Bancroft in the plays "The Miracle Worker" (1959) and "Two for the Seesaw" (1958).

They also collaborated on "Golda" (1977), a critically panned study of power with Bancroft as Israeli prime minister Golda Meir. The author reworked the play into a monologue, which became "Golda's Balcony" (2003), a popular hit starring Tovah Feldshuh and later a film with Valerie Harper.

In addition to winning the Tony for "The Miracle Worker," Mr. Gibson was nominated for "Two for the Seesaw" and "Golden Boy" (1964).

The second was a musical version of his friend Clifford Odets's 1930s boxing drama and which he took over writing after Odets's death. Sammy Davis Jr. starred in the Broadway production, which ran 18 months under Penn's direction.

Mr. Gibson occasionally was criticized for sentimentality and structural clunkiness, but his best stage moments achieved a compelling emotional clarity.

One of the finest examples was the water-pump scene from "The Miracle Worker," in which a determined Sullivan achieves a language breakthrough with her deaf and blind pupil who had resisted communicating beyond animal grunts and violent grasping.

Theater critic Walter Kerr said Mr. Gibson "dramatized the living mind in its incredible energy, in its determination to express itself in violence when it cannot arrange itself into thought. . . . When it comes, the physical contact of the child and the teacher - a contact that is for the first time meaningful and for the first time affectionate - is overwhelming."

Bancroft and Patty Duke, who had played the stage roles of Sullivan and Keller, respectively, won Academy Awards when repeating the parts for the 1962 film version. Mr. Gibson was nominated for an Oscar for his screenplay. His 1982 sequel about Sullivan, "The Monday After the Miracle," flopped.

"What makes for a hit is always an enigma, but one element certainly is common ground between the writer and his audience," Mr. Gibson wrote decades later in The New York Times. "The author of 'The Miracle Worker' believed in children, was young, energetic, incorrigibly optimistic, no stranger to the 'uplifting' in life; these are not objectionable qualities, and they flowed naturally into the script.

"And it was obviously a love letter," he added. "I like to fall a little in love with my heroines, and the title - from Mark Twain, who said, 'Helen is a miracle, and Miss Sullivan is the miracle-worker' - was meant to show where my affections lay. This stubborn girl of 20, who six years earlier could not write her name, and in one month salvaged Helen's soul, and lived thereafter in its shadow, seemed to me to deserve a star bow."

Mr. Gibson was born Nov. 13, 1914, in the Bronx. In his 1968 memoir "A Mass for the Dead," he wrote of the contempt he felt for his father's life as a mailroom clerk in a bank. He likened it to a prison, along with many traditional values such as his Catholic faith.

After dropping out of the City College of New York in 1932, Mr. Gibson floated around: acting in Abingdon, Va., becoming an organizer in the Young Communist League, and playing piano in Topeka, Kan., where he had moved with his wife, a psychoanalyst and future Odets biographer.

She supported him financially for the next 15 years as Mr. Gibson won prizes for his poetry and published a collection of verse, "Winter Crook" (1948). "It wasn't a practical life," he told the Hartford Courant years later, "but there was nachas - rewards, in Yiddish - enough to keep you going on to the next project."

His wife, the former Margaret Brenman, died in 2004. He leaves two sons, Thomas of Stockbridge and Daniel of Cambridge, Mass.

A mental clinic was the setting for Mr. Gibson's first novel, "The Cobweb" (1954), which received good reviews and was turned into a film the next year with Richard Widmark and Lauren Bacall. The Hollywood paycheck allowed the Gibsons to settle in Stockbridge, where the author completed what became his first stage success, "Two for the Seesaw." The show concerned a married Midwestern lawyer, played by Henry Fonda, and his affair with a heartbroken but life-embracing New York gamine, portrayed by Bancroft.

Mr. Gibson was influential in the summer stock theaters of Western Massachusetts. In the late 1960s, he was instrumental in the formation of the Berkshire Theatre Festival. Also, Shakespeare and Company, of Lenox, premiered his one-act "Golda's Balcony."

In addition, he taught for several years at Brandeis University in Waltham and was an artist in residence at the Lyric Stage in Boston.