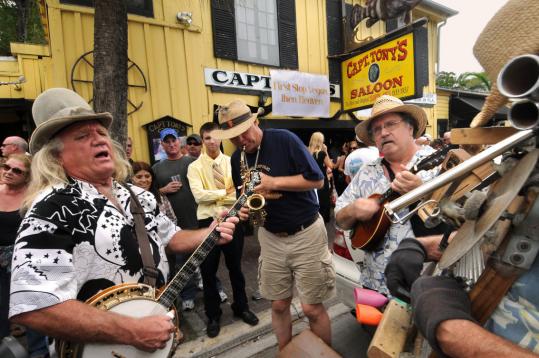 Musicians celebrated the life of Anthony Tarracino, known to one and all as Captain Tony, in front of Captain Tony's Saloon Saturday in Key West. The legendary former bar owner served as mayor from 1989 to 1991. He joined the stage with Jimmy Buffett (right) in 2005. (Andy Newman/Florida Keys News Bureau)
By Matt Schudel Washington Post / November 17, 2008
Text size – +

WASHINGTON - Anthony Tarracino, known to one and all as Captain Tony, spent two years as mayor of Key West, Fla., and 60 years as one of the most colorful characters in an island city full of them.

During his 92 years, he was a bootlegger, gambler, gunrunner, saloon keeper, fishing boat captain, ladies' man, and peerless raconteur.

He died Nov. 1 of heart and lung ailments at Lower Keys Medical Center in Key West.

Mr. Tarracino survived on his wits and cunning long before his arrival in raffish Key West in 1948 with $18 in his pocket. He spent more than three decades as a charter boat captain and for 28 years owned a dank, musty bar that once doubled as the city morgue.

Captain Tony's Saloon, an unprepossessing spot on Greene Street, still bears Mr. Tarracino's name almost 20 years after he sold it. It was set on the original site of Sloppy Joe's Saloon, which was the favorite watering hole of Ernest Hemingway when he lived in Key West in the 1930s.

A huge tree grows in the center of the tavern and disappears through the roof. License plates, business cards, and countless women's bras are stapled to the ceiling and walls.

In the 1970s, tropical troubadour Jimmy Buffett performed at Captain Tony's for tips and beers; he later described his experience in the song "Last Mango in Paris." Until a few months ago, Mr. Tarracino was a regular presence at Captain Tony's, where he greeted visitors, told stories, and signed T-shirts and posters displaying his grizzled likeness.

His most famous slogan, which became part of his successful run for mayor in 1989, was: "All you need in this life is a tremendous sex drive and a great ego. Brains don't mean" followed by a barnyard epithet.

Four years later, when Mr. Tarracino ran again, some people objected to his frequent use of a certain four-letter word. He was unapologetic, saying, "I just hope everybody in Key West who uses that word votes for me. If they do, I'll win in a landslide."

His goal as mayor was to limit Key West's growth and to keep its reputation as a refuge for eccentrics and renegades who had found their way to the southernmost point of the continental United States.

"Key West is an insane asylum," he told the Chicago Tribune while sitting behind his new desk at City Hall. "We're just too lazy to put up the walls or fences. I want to retain that mystique."

Anthony Tarracino was born in Elizabeth, N.J., where his immigrant father was a bootlegger during Prohibition. According to Brad Manard's "Life Lessons of a Legend," a book about Mr. Tarracino published the week of his death, young Tony dropped out of the ninth grade to make and sell illegal whiskey.

During World War II, he left a wife and three children behind in New Jersey and moved to Seattle, where he worked for the aircraft company.

After the war, he returned to New Jersey and made good money gambling on horse races.

But he ran afoul of mobsters and, according to Manard's book, was beaten and left for dead at the Newark city dump. Mr. Tarracino fled to Florida and hitchhiked to Key West on a milk truck.

For 35 years, he ran fishing boats - always called the Greyhound - out of Key West. He claimed to have been a gunrunner in the 1950s and to have ferried arms, CIA agents, and mercenaries to Cuba and Haiti. He said he was briefly jailed after smuggling refugees out of Castro's Cuba.

He ran Captain Tony's Saloon from 1961 to 1989, when he was elected mayor. His principal achievement was to preserve Key West's daily sunset celebration, at which acrobats, buskers, and performing animals appear in an impromptu street theater.

He leaves his fourth wife, Marty, to whom he was married for 38 years; 12 children; 13 grandchildren; and three great-grandchildren.