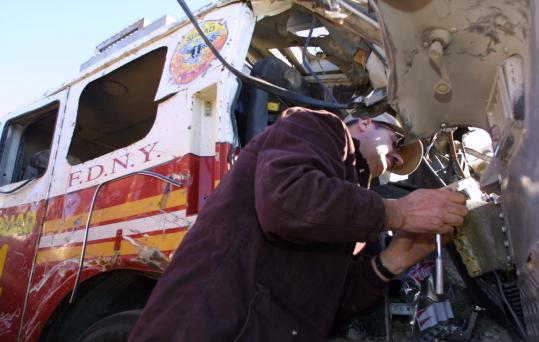 WASHINGTON - David Shayt summed up his impact on the world in less than 100 words.

"As a museum specialist at the Smithsonian's Museum of American History," he wrote in the for a special millennium issue, "I have added to the national collections 91 packs of Crayola crayons, two electric barber poles, 44 shoe store foot-measuring devices, a Playboy bunny outfit, 46 eggs of Silly Putty, two french fries scoops (left- and right-handed), 40 packs of cigarettes, nine cue sticks, 135 walking sticks, and a bullwhip used by Harrison Ford as Indiana Jones."

Mr. Shayt, an associate curator in the museum's work and industries division whose eclectic interests ranged from yo-yos to sundials, from the development of the ivory trade to the work of cymbal-makers, died Nov. 4 of multiple myeloma at his home in suburban Gaithersburg, Md. He was 56.

It was he who decided the Smithsonian should have a crown from the Miss America beauty pageant, and when he found a winner willing to donate one - Miss America of 1951, Yolande Betbeze Fox - she also gave him her scepter and sash.

Even within the ranks of the Smithsonian's intellectually omnivorous staff, Mr. Shayt stood out.

"I think he was one of the most versatile and agile members of the staff, and that's saying a lot," said Brent Glass, museum director. "People tend to specialize within their subject matter, and David never set a limitation or boundary on his interests."

In the early 1990s, Mr. Shayt traveled to Guyana with a team of specialists to stabilize and repair the country's historic market clocks. In 2002, he was sent to dig World Trade Center artifacts out of New York's Fresh Kills landfill, including the door of a damaged firetruck.

He also persuaded a window washer who had been trapped in a World Trade Center elevator with five others on Sept. 11, 2001, to donate the broken tool that he used to dig through the elevator shaft wall.

"It's collected not as a squeegee handle itself, but as evidence of life's affirmation," Mr. Shayt told the Post. "This is evidence of survival."

In 2005, Mr. Shayt and colleagues set off in search of historic items after Hurricane Katrina struck Louisiana.

"I wanted something that reflected the trauma of losing one's home, and I almost gave up," he said. But going through New Orleans's upended Lakeview section, he spotted a toy castle in the mud between houses, tossed upside down.

"Castles are impregnable and supposed to be our fortress," he said. "That toy castle spoke volumes about our expectation that houses are supposed to last." He sealed the castle in a container, mud and all, and brought it back to Washington.

His favorite accomplishment, colleagues said, was overseeing the creation and installation of a bell for the Smithsonian Castle's clock tower. Installed in 1996, the D-flat chimes register at 30 decibels - the equivalent of a whisper - and remind all within earshot that it's noon.

"Even though it's the National Mall, we also think of it as a village green, and the bell will serve as a community sound," he told the Post.

Born in San Francisco, he served in the Marine Corps as a security specialist at US embassies in Guyana and Haiti before graduating in 1977 from Humboldt State University in California. He received a master's degree in American studies from George Washington University.

After his Humboldt graduation, Mr. Shayt worked briefly at the Landor Museum of Packaging Antiquities in San Francisco.

Maybe that's why, when he joined the Smithsonian in 1977, he had a particular affection for quirky containers. He curated exhibitions that focused on tool chests, lunchboxes, and the only known 1958 64-crayon box in existence, complete with its original crayons.

He also sought out coffins as representative of contemporary technology and craftsmanship, combined with the age-old ritual of how Americans deal with death.

That kind of eclecticism brought inquiries from fellow staffers stumped on one topic or another. Over the years, he also fielded calls from the public and handled artifacts of dubious historical value that some people sought to donate. He was philosophical about the task.

"There's an accurate perception that we are forever," he said in 1992, "that we will care for - not necessarily exhibit but care for - and honor an object eternally. That perception of immortality is very precious to people.

"There's a school of thought here that regards museums, especially the Smithsonian, as ecclesiastical, as quasi-religious and that people give things as a way of obtaining a piece of immortality. Now that's getting very metaphysical, but there could be something there, because what we do offer is perpetual care."