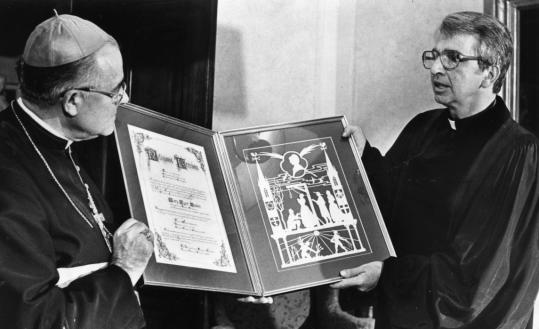 Combining his deep love of the outdoors and his commitment to Christianity, James A. Nash published a book 17 years ago that became a powerful text in the emerging field of ecotheology as he placed environmental ethics within a spiritual context.

"In our time, particularly, the meaning of sin must be properly extended to cover ecological misdeeds, and the human condition underlying them," he wrote in "Loving Nature: Ecological Integrity and Christian Responsibility," which came out in 1991. "The ecological crisis and the host of actions contributing to that crisis are best understood in the context of sin. . . . Sin literally defiles the land."

Dr. Nash, who spent 21 years working for the Massachusetts Council of Churches, most of that time as executive director, died in his Burlington home Wednesday of acute myelogenous leukemia. He was 70.

"His environmental work was way ahead of its time," said Ronald M. Green, chairman of the department of religion at Dartmouth College. "He was trying to correct the attitude of dominion and control that has characterized too much of Western religious approaches to nature, and which still prevails in many places, that nature is there for us to exploit. He wanted to place us as members of the community of nature. Not simply rulers, but members and stewards with a spiritual mission."

"He became, I would say, one of the leading environmental ethicists in the country," said the Rev. Norman Faramelli, an Episcopal priest who is a lecturer in social ethics at Boston University School of Theology and the Episcopal Divinity School in Cambridge.

The foundation of Dr. Nash's writing was a lifetime of growing environmental awareness. He was raised in a family of steelworkers outside Pittsburgh and as an adult devoted most of his free time to birding in remote locales such as the desert Southwest and the interior of Alaska.

An ordained Methodist minister, he only had to gaze at the landscape around him during any excursion to find his own interpretation of biblical text.

"We are standing perpetually on holy ground because God is present," he wrote in "Loving Nature." "The sacramental presence of the spirit endows all of creation with a sacred value and dignity."

Next month, The Journal of Religion, Nature and Culture will publish his final essay, "The Bible vs. Biodiversity: A Case Against the Use of Scripture in Moral Argument."

His family, meanwhile, has the draft of what was to be his final book, "The Subversive Virtue: Frugality as Social and Ecological Imperative." Dr. Nash did not think it was polished enough and wanted to return the advance his publisher had paid.

"He was the most meticulous writer that I know," said Dr. Nash's wife, Millie. "He didn't find writing easy. Somebody once said in 'Loving Nature' there isn't a page that doesn't have a quotable line. He took pleasure in writing, but he did not take pleasure in the second-rate. If he could not make it perfect, he didn't want it to go out."

Dr. Nash, who also wrote a draft of his obituary when he knew not much life was left, said he grew up in Duquesne, Pa., "in a low-income housing project on a bluff overlooking the orange-glowing mills along the biologically dead Monongahela River."

In his household of union steelworkers, one family treasure was the button a relative tore off a Pinkerton detective who was brought in to break up a strike.

"He never took anything for granted," his wife said. "He saw how lucky he was to get out of that place, but he realized there were still a lot of people who were there. He'd get so mad when he would hear people say, 'Well, if you just work hard you can get what you want.' He'd say, 'That's not the way the world works.' "

The first in his family to be educated beyond high school, he graduated from Grove City College in Pennsylvania, and met Millie Leonard in a religion class.

"We sat alphabetically and he was right behind me," she said. "After the first test, the teacher announced that two people had gotten a 100, me and him. I turned around and promptly asked if he copied off my paper."

An academic fellowship helped finance a year of study at the London School of Economics. The year before and the year after living in London, he was a minister at Methodist churches in southern New Hampshire and the Nashes lived frugally.

"We got our pay every Sunday in a little brown envelope," Millie Nash said, laughing. "It came mostly in dollar bills."

A Rockefeller fellowship allowed him to complete a doctorate in social ethics at Boston University in 1967. Dr. Nash aspired to teach, but decided to take a job offer that year from the Massachusetts Council of Churches.

First as associate director for strategy and action, then for 13 years as executive director, he became what he called a "church politician," bringing various denominations together to meet and talk out their differences.

"He did an extraordinary job with the council," Faramelli said. "He had a very good knack of bringing people together. He was a master of dialogue, and he did it without losing his own convictions."

In 1988, Dr. Nash began a decade as executive director of the Churches' Center for Theology and Public Policy in Washington, D.C., and also taught and lectured at colleges and conferences.

For decades, Dr. Nash was fond of "grueling hikes" in search of birds, and wrote that he "was at home in a tent." He and his wife were planning a birding trip to Alaska when he was diagnosed in May. Instead, he wrote as much as possible in the past few months and left a legacy of words.

"I think he's a pioneer," Green said of "Loving Nature" and Dr. Nash's other work on the confluence of environmental ethics and theology. "I think his work will be read and remembered very much into the future. People will look back and see this as sort of a turning point."

In addition to his wife, Dr. Nash leaves two daughters, Noreen of Cambridge and Rebecca of Gales Ferry, Conn.; a brother, Norman of Adrian, Mich.; and a granddaughter.