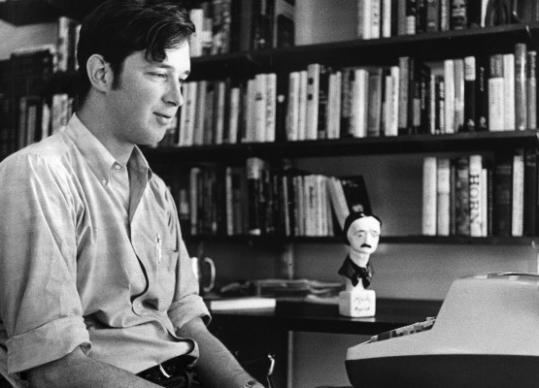 LOS ANGELES - Michael Crichton, who wrote such best-selling novels as "The Andromeda Strain" and "Jurassic Park," directed such movies as "Coma" and "The Great Train Robbery," and created the long-running TV drama "ER," has died. He was 66.

Dr. Crichton, who put himself through Harvard Medical School by writing potboilers under several pseudonyms before becoming a novelist whose books sold more than 150 million copies worldwide, died Tuesday in Los Angeles after what his family described as a "courageous and private battle against cancer."

"Michael's talent outscaled even his own dinosaurs of 'Jurassic Park,' " filmmaker Steven Spielberg, who directed the movie version of that novel, said in a statement. "He was the greatest at blending science with big theatrical concepts, which is what gave credibility to dinosaurs again walking the Earth."

That synthesizing of science and storytelling began at Harvard. After earning his undergraduate in anthropology in 1964 and spending a year on a teaching fellowship at Cambridge University, he entered the medical school.

To help pay his tuition, he began writing paperback thrillers under the pen names John Lange and Jeffery Hudson. His 1968 medical thriller "A Case of Need," won an Edgar Allan Poe Award from the Mystery Writers of America.

While still studying medicine at Harvard, he wrote his first best-seller: "The Andromeda Strain," a fast-paced scientifically and technologically detailed thriller about a team of scientists attempting to save humanity from a deadly microorganism brought to Earth by a military satellite. It was made into a movie in 1971.

After getting his medical degree, Dr. Crichton moved to California and eventually abandoned medicine to become a full-time writer.

"I don't like being locked into someone else's reality. People tend to be gladiators, with nets," he told The Boston Globe in 1988. "What I heard when I gave up doctoring for writing was: 'This is ridiculous!' 'You're nuts!' You're a fool!' "

Instead, he became rich and famous.

For the next four decades, the 6-foot-9 writer was a towering presence in the worlds of publishing and filmmaking.

Dr. Crichton made his feature film directing debut in 1973 with "Westworld," which he also wrote, about a fantasy theme park for wealthy vacationers whose fun is spoiled when malfunctioning androids turn deadly. Yul Brynner was the leader of the marauding androids.

Dr. Crichton directed five other movies in the '70s and '80s, including "Coma." For his adaptation of that Robin Cook novel, Dr. Crichton returned to his Boston ties. He filmed much of the movie in Eastern Massachusetts, including hospital scenes at Boston City Hospital.

As a novelist, Dr. Crichton came back stronger than ever in the 1990s with bestsellers such as "Jurassic Park," "Rising Sun," "Disclosure," and "Timeline."

Dr. Crichton also created "ER," the long-running NBC medical drama that debuted in 1994 and became the No. 1 series the next year. This season will be the series' last.

Neal Baer, a physician who became an executive producer on "ER," was a fourth-year medical student at Harvard University when he was sent Dr. Crichton's script.

"No lunch with Michael lasted less than three hours and no subject was too prosaic or obscure to attract his interest. Sexual politics, medical and scientific ethics, anthropology, archaeology, economics, astronomy, astrology, quantum physics, and molecular biology were all regular topics of conversation."

By then, the prolific writer who closely guarded his private life had become a dominant figure in popular culture. He even had a dinosaur named for him, Crichton's ankylosaur.

Known for his intellectual curiosity, energy and drive, Dr. Crichton was a self-described workaholic.

"He works hard," Anne-Marie Martin told Vanity Fair in 1994. "Toward the end of a book it's like living with a body and Michael is somewhere else. Then, when the book's finished, Michael comes back."

When he wasn't writing fiction, Dr. Crichton periodically turned to nonfiction, including "Jasper Johns," a 1977 portrait of the artist; and the 1988 autobiographical book "Travels."

He also wrote a book on information technology, "Electronic Life" (1983), formed a small software company in the early '80s, designed a computer game, and shared a 1995 Academy Award for technical achievement for pioneering computerized motion picture budgeting and scheduling.

The oldest of four children, John Michael Crichton was born Oct. 23, 1942, in Chicago and grew up in Roslyn, N.Y.

He developed wide interests at an early age, he later said, recalling his mother taking her children to plays, museums, movies, and concerts several times a week.

Although he said his father, an editor with Advertising Age, displayed a streak of meanness, Dr. Crichton praised both parents for not setting limits on their children's exploration.

"They were always saying, 'You can do that.' So I never had the feeling there was some area that I was incompetent in," he told Vanity Fair in 1994.

Dr. Crichton said he wrote extensively from an early age. In third grade, he wrote a nine-page play for a puppet show. At 13, he started submitting short stories to magazines, and he sold a travel article to the New York Times when he was 14.

He also wrote for the Harvard Crimson.

A complete list of surviving family members, who include his fifth wife, Sherri, and daughter Taylor, was not available.

Material from the Los Angeles Times and Associated Press were used in this obituary.